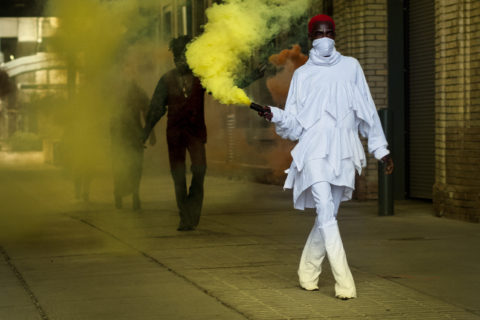 From the 15th to 26th of October, you can check out the work of 25 Canadian designers via an expanded digital presence.

“There are always more boundaries to break,” says Vanja Vasic, founder and executive director of the now 15-year-old event, Fashion Art Toronto. Having hosted several livestream shows this past Spring (when the IRL FAT was meant to happen as part of its regular scheduling), the vanguard multi-day initiative is keeping its commitment to being a showcase for the world’s most eclectic talent by rolling out its Virtual Fashion Week calendar. As always, Vasic and her team have considered how to uniquely represent creativity at this highly unusual time.

“You look outside, and you have the city’s landscape as your runway,” she says of how the ideation process for the re-conceptualized event started, after it became clear that doing a typical FAT fête–one that draws thousands of attendees each year–would not be possible due to COVID-19 restrictions.

In keeping with FAT’s mission to present boundary-pushing ideas when it comes to design–whether that be in terms of gender norms, sustainable fabrications or technology, for example–Vasic says they landed on using various Toronto locations as scenery for the runway presentations. “We’re giving every designer a unique backdrop for their show,” she notes of the venues, which include the Ontario Science Centre and Ontario Place. “We’ve curated each location for them specifically; you’re going to be told a story of Toronto while looking at their collections. [And] no two shows will have the same backdrop, which is very exciting.”

Tapping into what makes something supremely special–be it a city, a garment’s design or a person, as was the case when FAT became the launch pad for mega model (and current FASHION cover girl) Winnie Harlow several years ago–is a signature of Vasic’s, and a skill she’s further polished while helming FAT for all these years. “It’s not your typical fashion week,” she notes. “We give people who don’t feel that they’re necessarily part of the mainstream, or that they belong, a voice and a platform. We’ve always been a space to explore gender norms and [feature] different body types and cultural backgrounds; that for me, at the core, is what keeps me motivated.”

Just as FAT’s ethos has been in championing the power and beauty of difference, the upcoming fashion shows–which will feature brands including the upcycling-focused House of Mannon, U3, Gervacy, Eight (i) Three, and Pasquiat plus a finale featuring a selection of work by Ryerson University grads–will also harness an audacious spirit. “It’s a bit rebellious in a way,” she says. “We’re taking over the city and the streets, and doing it in light of the limitations.”

After the success of the initial Instagram Live/YouTube streams that FAT featured in April, Vasic said it was logical to build on that momentum–one that taps into the excitement of live entertainment (and the soothing nostalgia anyone from a certain age group will feel about the Science Centre’s immense escalators). “We’re still doing a live show to keep with that element of spontaneity and performance,” she says. For those unable to tune in live, edited versions of the shows will be posted later; there will also be a few fashion films peppered into the programming, too.

Of course, there are other worthy reasons for choosing to highlight Toronto’s notable scenery other than the fact that we aren’t able to really enjoy it right now. There’s also the notion that FAT is uniquely Torontonian–and that’s something to celebrate. “At the end of the day, we’re trying to present Canadian and Toronto-specific fashion,” says Vasic. “Being proud of the city and where we come from is important. I think that sometimes as Torontonians, we have a difficult time being proud of our identity, in a sense. Especially in the fashion world; we’re not Milan or New York or London.” She does say, though, that having the ability to run FAT virtually gives it the ability to globalize as well, and notes that designers from the U.S. and Peru are also slated to take part in the week’s agenda.

These inclusions speak to FAT’s seasonal (and ultra-prescient, given it was decided pre-COVID) theme of ‘We’re All in This Together’; and furthering this community-minded sentiment is the request that since guests to FAT won’t be purchasing tickets this year, that they should instead give to the Toronto-based organization, FoodShare.

“Having access to food is a basic need,” says Vasic when asked why FAT decided to guide donations there. “There’s a lot of people struggling right now–it’s not just now, it’s always been an issue, but specifically now. [FoodShare] works with marginalized communities–people with disabilities and people of colour. We just want to be part of a bigger community and support something that’s meaningful. They’re about creating equality; it’s something that we do as a festival by giving a voice to people who aren’t typically recognized. So, in that sense, it’s also relevant.”

Speaking of relevant, the shift that the fashion industry has undergone in recent years towards creating a more inclusive landscape can’t be lost on Vasic, who is a pioneer of this thinking. While noting that the diversity celebrated by FAT has been both an asset and a detraction–“[It’s] what keeps FAT not as known and recognized, in a way”–she says that she’s inspired by what she’s encountered, specifically in the last few months, about how people both in the fashion industry and outside of it think.

“When you’re in a crisis like this, it wakes you up to what’s important,” she says. “For me, there’s been lots of anxiety–as a creative person myself, but I also have all these other creative people depending on me. It was just about taking action and doing something. That was the thing that got me out of the rut of anxiety, fear and what’s going to be next. To re-evaluate, and swim…. Now that I’ve been able to provide this space for people, I feel more energized because the creatives are energized and excited to be back. They’d put everything on hold, and now this energy is propelling them. It’s a nice feeling to be able to do your thing.” Those close to FAT, either as participants or spectators, wouldn’t want it any other way.

L'Uomo Strano photography by Tyler Ribchester.
Get the best of FASHION in your inbox Thanks for signing up!
The latest fashion, beauty and celeb news delivered right to your email #FASHIONforall Now, check your inbox to complete your subscription
We won’t ever use your email address for anything else
Want even more FASHION? Follow us on social media.