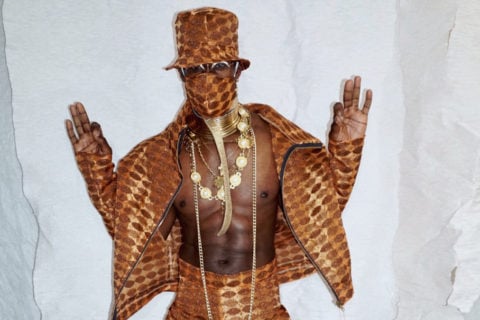 2020 marks the 15-year anniversary of Fashion Art Toronto, the city’s largest annual multi-arts fashion festival, which draws thousands of guests every spring for its experimental, diverse and inclusive convergence of art and fashion. Because of COVID-19, however, FAT had to pivot from its original celebratory plans, choosing instead to host a virtual runway series.

The production and filming of the shows will feature a limited in-person crew, with social distancing guidelines and safety regulations in place. Models will be doing their own hair and makeup, with the crew providing masks to all models, designers and team members.

Mic Carter, a Toronto-based creative and founder of the gender-nonconforming brand L’Uomo Strano, will be kicking off Fashion Art Toronto’s 2020 Virtual Runway Show on Monday with a collection “inspired by the recent modern-day lynchings of Ahmaud Arbery, Breonna Taylor and George Floyd.” We spoke to Mic, who goes by the pronouns they/them, about their “protest fashion” collection and what it’s like to stage a runway show during a pandemic.

Tell us a bit about what your brand stands for and the kind of clothing you design.
My brand is called L’uomo Strano, which means “the strangest man.” When I was studying in London over a summer, there was a woman who would see the way that I showed up. I identify as genderqueer, and she was from Italy and I think she had never met somebody who was genderqueer before. So she just kept on calling me ‘strange man’ in Italian over and over, every day, and laughing. I came back to Toronto and realized that there’s a community of gender-nonconforming, genderqueer and trans people who need clothes that are acceptable and won’t be laughed at. So that’s the gender side of the brand. And beyond that there’s a very Black element to my brand. When I started the brand in 2013, there still wasn’t that much diversity on international runways and that marginalization really stuck. It was the worst. And so really kind of centering the narrative of Black and brown folks that are trans, that are gender-nonconforming, are non-binary, was really an impetus behind the brand.

What’s it like preparing for a runway show during a pandemic?
It’s been pretty wild. I haven’t been able to really engage with contractors in the same way. I couldn’t travel in to Mississauga and have meetings and go down to sewing stores. But it made everything a little more organic and in-house. I’m really attracted to the idea of salvaged fabric and upcycled fabric. I think that even ancestrally, we as Black people had to kind of just make do with what was there. So I think I was accessing that. I had all this salvaged fabric, like rolls and rolls of it, really beautiful salvaged fabric, so I just used that.

The collection you designed for FAT was inspired by the recent killings of Ahmaud Arbery, Breonna Taylor and George Floyd in the United States. What made you want to translate what you were seeing and feeling into clothing, and how did you interpret it?
When Vanja reached out and said that this virtual show was going to happen, the uprisings in the States had just started. It was heart-wrenching and shattering to be processing all of the information that was coming through Instagram and Twitter and also having to create a collection, so I think I was sort of working through the grief through fashion. It was like a therapy of sorts.

As I was working through the imagery of these people who had passed away, I saw how people were communicating through visual arts their veneration of the victims. A lot of the visual arts posited them as saints of the Black Lives Matter movement. That was something that really resonated with me. So I constructed angelic-like silhouettes, very large, very pouffy silhouettes in some of the pieces, to communicate that. And rich colours and rich fabrics, to give that feeling of an elevated reality and respect for these folks.

And tell us about the name that you chose for this collection, “Strange Fruit.”
“Strange Fruit” is a song by Billie Holiday, and later covered by Nina Simone, that speaks about the lynching of Black men in the 1930s. And because this collection was so inspired by these modern-day lynchings, I just really wanted to make that connection in the name.

Tune in to the L’Uomo Strano show at 8pm EST on Monday, June 22 here.

Image courtesy L'Uomo Strano
Get the best of FASHION in your inbox Thanks for signing up!
The latest fashion, beauty and celeb news delivered right to your email #FASHIONforall Now, check your inbox to complete your subscription
We won’t ever use your email address for anything else
Want even more FASHION? Follow us on social media.