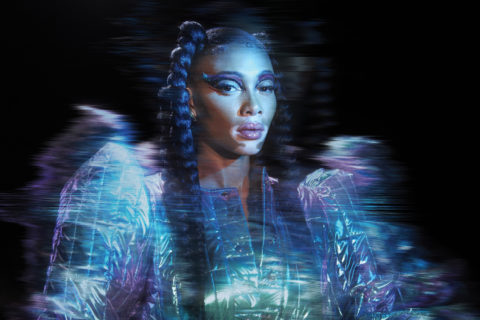 Winnie Harlow Talks Ontario Beginnings and Opening the Door for Others

Winnie Harlow didn’t realize she was different until others pointed it out, including the modelling agents who rejected her. Now, she is one of the most memorable faces in fashion.

“I don’t think I realized at first that I was different,” says Toronto-raised, Los Angeles-based model Winnie Harlow of how a childhood vitiligo diagnosis impacted her notion of what her life would be like. “That was due to my upbringing. It wasn’t until I was out in the world that I could sense the differences.”

While reactions to Harlow’s appearance have shifted from devastating bullying to praise and admiration, her uniqueness is what ultimately made her a star in the fashion sphere. Vogue covers and catwalk appearances at some of the most exclusive events, like Jean Paul Gaultier’s 50th anniversary show, speak to the power of her self-possession and determination, and these are traits she has been cultivating for quite some time.

“My grandmother took me with her to pick up my cousin at school one day, and a little kid came up to me and was like, ‘What’s on your skin?’” she recalls. “My grandmother has a very strong personality and is very confident, and I was raised around her. She remembers me replying ‘Child, my skin is none of your business.’ That was my energy growing up.”

Harlow’s ability to retain and expand that energy has led to her landing campaigns for Puma, Fendi and Diesel — all lofty achievements after less than a decade in the industry. Her foray into modelling began after a friend urged her to attend a casting call for the annual Fashion Art Toronto event. Harlow, who was working at La Senza in Yorkdale Shopping Centre at the time, put off the suggestion, but her friend persisted and Harlow gave in. “I thought I should at least try,” she says. “I got off work one day and took a bus to the casting; I was in a ton of shows that week. It was encouraging, and I’m really happy that I listened to my friend.”

It was a breakthrough moment for Harlow in terms of showing her “what the fashion industry could look like.” Up until that point, she’d been rejected by modelling agencies. “People didn’t really know what to do or where to place me or how to book me because it had never been done before,” she says. “That was my challenge in the beginning. I just had to make a voice for myself to be heard.”

Harlow’s ambition was bolstered through meeting TV and online personality Shannon Boodram, who discovered her and made a viral video clip in 2011 about vitiligo and the fact that it didn’t detract from Harlow’s standout qualities. “I’m grateful for Shannon’s eye — for seeing a story there,” says Harlow. “She was the first person to say she could see me on the cover of Vogue. It wasn’t something I could visualize because I hadn’t seen it. But she had that visionary eye.”

In fact, Harlow remembers looking at posters in the store where she worked — all featuring “white girls with blond hair and blue eyes” — and thinking she wanted to be in that position one day. “I worked at La Senza and ended up walking the runway for Victoria’s Secret,” she says. “That was a full-circle moment for me.”

The tenacity Harlow has exhibited throughout her career perhaps shines most brightly when she speaks about her fears. Reminiscing about our cover shoot in southern California’s Joshua Tree National Park (a locale known for its intimidating wildlife), she says, “I thought about there being snakes, and that was kind of scary, but I worked around them before, for a Nike shoot.” She is also afraid of swimming, but she learned the skill in order to do an underwater photo shoot. “While I did cry at one of the lessons, I went back and kept pushing myself. I’m just the type of person who can’t let my fears stop my progression.”

While Harlow doesn’t allow dread to consume her, when speaking about the anxiety that the uncertainty of 2020’s events has caused, she says that she “tends to internalize things a lot. Sometimes it’s hard to verbalize things that are complicated or frustrating, but it’s good to talk about them.” Her go-to confidants include her mother and her boyfriend, NBA player Kyle Kuzma — she flew to Orlando to join in his team’s quarantine “bubble” this past August.

Touting her Jamaican grandmother (a fellow Leo) as a strong influence in her life, Harlow now counts Naomi Campbell as a “powerful force” in her career, adding that the legendary supermodel called her on her birthday this year. This connection is a long way from her attempts to enter the fashion industry so many years ago, when she was told that if she wanted to work in the industry, she “should be a makeup artist.”

Now, Harlow is in demand for not only her beauty but also the ingenuity she brings to editorial shoots. “I take pride in being more involved in the process now,” she says of her work, reflecting on how social media has allowed her to feel more connected to her followers — although her favourite interactions with them are still when she meets them on the street during fashion week.

“I remember getting a DM from a fan in the Middle East who also has vitiligo,” she says of her fortuitous interaction with Shahad Salman. “She showed me comparison pictures of her and me, and they were so similar. A while later, I had the opportunity to do a Vogue Arabia cover, and we were trying to figure out how we could make it powerful. The idea struck that we could have a shoot with Shahad. It’s not just about me being the first; it’s about me being able to open the door for others.”

This notion sets Harlow apart from others in the fashion industry — an industry that’s notoriously narrow in terms of who it allows into its realm. And it exemplifies the idea that if people have someone to look up to, which she points out she didn’t have when it came to modelling, it can make a world of difference.

Harlow’s desire to broaden perceptions is also evident in her downtime activities; one of her favourite stress relievers is spending time with a colouring book. “Disney princesses are my thing,” she says. “I do my own takes on them. I like to make them ethnic or Black, because there wasn’t a Black Disney princess for a very long time. I like to switch it up and make a character be from a different race or have different hair — give her a pink lace-front wig instead of black or blond flowing hair. I’ve done pink ombré wigs myself — I want to see myself as a Disney princess as well.”

As imaginative as her approach can sometimes be, Harlow is also quick to highlight the importance of keeping ideas and admiration grounded in reality. “I don’t personally believe in role models, because a role model by definition is someone who’s put on a pedestal and looked at as something that’s not even human,” she notes. “We are all humans…. You can’t think that anyone in the world is perfect, and that’s what that ideal of a role model suggests. I look at people off the pedestal and think that we are all equal. It’s more about inspiration.” And that’s something that Harlow, more than most, knows a thing or two about.