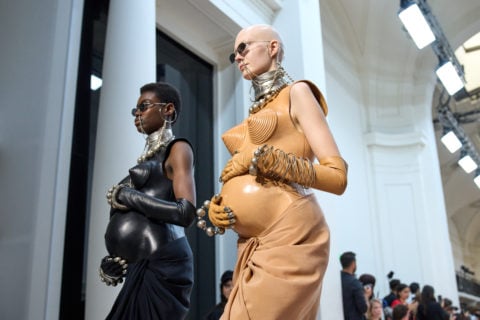 On the surface, the Fall 2022 couture collections didn’t have much in common. Where one embraced the ’30s, the other preferred the ’80s. Romantic minimalism reined one runway yet intergalactic maximalism ruled another. And don’t even get us started about the proportions! But what they all do share is a love of craftsmanship — be it in the painstakingly delicate work that takes place in the Chanel ateliers or the use of technology to create Iris van Herpen’s otherworldly garments. But above all, couture week, as cliche as it may sound, is about bringing dreams to life. These are rule-less runways in Paris, and it would seem that designers have never felt more emboldened by this freedom. See for yourself in our highlights from Haute Couture Week Fall 2022.

Chanel brings back the midi skirt

For the house’s Fall 2022 couture collection, Virginie Viard sent an assortment of long, slinky gowns and separates down the runway. Her inspiration? The 1930s skirt suit, with some modern day revisions. The highest hem evoked images of 2000s capris, while the longest just grazed the tops of the black cowboy boots seen on most models. Pack it up, micro-mini.

With files from Annika Lautens

Looking more like a red carpet than a runway, Kim Kardashian, Nicole Kidman, Dua Lipa, Selling Sunset’s Christine Quinn, Bella Hadid and Naomi Campbell all took their turn on the catwalk at the historic Balenciaga salon in Paris. Denim, latex, fur, feathers, sequins and a material resembling a metallic emergency blanket intermingled in a textural tour de force. From the cast of models to the clothes themselves, the collection didn’t play it safe, and we should expect nothing less from Demna.

With files from Annika Lautens

It may not have been her intention, but Maria Grazia Chiuri tapped into a magical TikTok fashion subculture: fairycore. For Dior’s Fall 2022 couture collection, the designer was inspired by the tree of life, an emblem that is at the heart of Ukrainian artist Olesia Trofymenko’s work. In line with her previous couture shows, Chiuri kept the colour scheme fairly neutral, ensuring the tree and its meaning was front and centre.

Not one to dwell on the past, Dutch designer Iris van Herpen marked the anniversary of her mononymous label by sending otherworldly creations down the runway. One of the first to enlist 3-D printers in high fashion, van Herpen’s Fall 2022 haute couture collection was a celebration of the futuristic flair she has become known for. Her architectural ‘Meta Morphism’ show imagined a celestial world, and all we can say is, how do we get a ticket to planet van Herpen?

Schiaparelli’s love letter to the ’80s

For the house’s Fall 2022 couture collection, Daniel Roseberry paid homage to the surrealist visions of Elsa Schiaparelli. But his true inspiration was found in an era she herself would never see: the ’80s. And it all started with a conversation between Roseberry and Christian Lacroix that stirred up feelings of nostalgia for a much different time in fashion history. The result? Plunging necklines, corsets, bustiers and wide-brim hats merged with floral embellishments, materials like velvet and feathers, and plenty of gold.

As the guest designer for Jean Paul Gaultier’s Fall 2022 couture collection, Olivier Rousteing had his work cut out for him…literally. In addition to the shredded wares he sent down the catwalk, the creative director of Balmain married his own transformative flair with the storied designer’s novel creations to create a beautifully bizarre series of pieces. Exhibit A: The two pregnant-looking models in cyber punk-esque gowns and sunglasses.

After their Nosferatu-inspired Spring 2022 couture collection, which saw models wear vampiristic ear-high necklines, it would seem Viktor & Rolf are ready to step out of the darkness — just a little. For their Fall 2022 collection, the designers kept some of the same strict structure but weaved high collars with comically wide shoulders that showed a little more skin. If you were looking for a return-to-office outfit that really stands out, this could be just the thing for you.

Fendi takes us to Kyoto

Japan’s cultural capital, Kyoto, was the starting point for Fendi’s Fall 2022 couture collection. And at its heart was the centuries-old hand printing and painting technique called Kata Yuzen. Made in Kyoto as traditional silk panels, Fendi’s fabrications are sliced and asymmetrically reformed in floor-length dress silhouettes. An intermingling of east and west, masculine and feminine, tradition and invention, Fendi’s delicate pieces brought many worlds together.

Anne Hathaway is a Barbie girl

A little further south, Valentino introduced its Fall 2022 couture collection in Rome. Called ‘The Beginning,’ the Italian house’s new pieces were distinctly different from those presented in its viral Pink PP collection shown at Paris Fashion Week earlier this year. The rosy hue of course made an appearance on the catwalk, this time co-mingling with shades of purple, blue, red and green. But even more show-stopping than the clothing was the guest list, which included Florence Pugh, Naomi Campbell and, yes, Anne Hathaway, who is most definitely in her “It” girl era, just like another pretty in pink lady we know and love (ahem, it’s Barbie).

Jean Paul Gaultier Fall 2022 Haute Couture. Photography courtesy of Imaxtree
Get the best of FASHION in your inbox Thanks for signing up!
The latest fashion, beauty and celeb news delivered right to your email #FASHIONforall Now, check your inbox to complete your subscription
We won’t ever use your email address for anything else
Want even more FASHION? Follow us on social media.