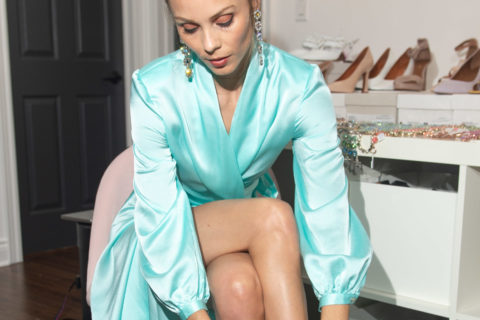 “I want to be able to communicate the feelings that these outfits were made to inspire.” Designer Jordan Stewart, who helms the brand RVNG, is talking about producing an online event instead of a runway show to launch her next collection. The virtual showcase will be streamed on Sunday, September 13th as part of the upcoming Spring 2021 fashion week calendar, and will remain on the New York Fashion Week website for those who aren’t able to log in for the 7pm EST time slot.

Stewart’s fanciful work has become a favourite amongst event-goers and those attending special occasions; and learning a new way of translating the RVNG fantasy–a task that once begged for the dramatic and transportive nature of a runway presentation–is one she’s meeting with enthusiasm. “Evolution is part of the program,” she says about the fashion industry, and why it’s well-suited to meet the challenges inherent in our new, socially-distanced world. “We have to adapt and pivot and reinvent what we’re doing.”

Having previously shown during Toronto Fashion Week, Stewart finally felt ready to apply to the NYFW calendar and began the process last year; in early 2020, there was anticipation that she would be bringing her collection of ready-to-wear and occasion pieces to Manhattan for a live show. Of course, those hopes were eventually dashed. “The goal has always been New York,” she says of setting her sites on the NYFW schedule, adding that when it’s safe to do so again that she looks forward to putting on IRL runway events again. “It’s [been] a process of earning my stripes–I had enough shows and collections under my belt that could possibly make me a contender for their stage. [Then] we all had the ground pulled from under our feet.”

She recalls initially feeling “inappropriate” posting brand-related content on her social feeds as we all tried to adapt to the uncertainty of the times. “You’re so worried about people’s health and the economy–there were so many serious things happening that it almost felt offensive to be focusing on the arts,” Stewart says. “But there came a point where we definitely knew we had to continue and that life must go on.” Also at play was the realization of a long-sought goal for the designer. “I worked my whole life for this,” she says of her NYFW debut. “I’m showing after Jason Wu on opening day. It’s a dream come true.” Adding to the spectre of reverie for the imminent RVNG event will be the presence of actress Laura Vandervoort, who will walk in the digital show.

Understanding her own role in adding to the beauty of our world–particularly on a personal level for each of her clients–Stewart set out to create pieces that spoke to the times. “I chose to be living in optimism,” she says of how she approached the new pieces we’ll get a glimpse of this weekend. “I call it the Dream collection because of everything we’ve been through; it’s almost surreal. We’re all off-balance and off-kilter. I’ve created an optimistic view of fashion and of this moment. [It’s about] coming out of this together.”

In tune with this theme of idealism, Stewart used a rainbow-hued palette (though there are no dark colours in the runway collection, customers can have pieces made in them if they wish), and employed texture and whimsical silhouettes to amplify a sense of confidence. “It’s art,” she says of the role of design in fraught times. “We want to be inspired.”

She’s been able to retain her own feeling of positive expectations through watching the parade of red carpet looks at the recent VMAs, as well as still maintaining a roster of clients who are looking forward to events to come. “People are planning for the future,” Stewart notes.

While she believes that fashion lovers will forge ahead–albeit in different and safe ways–Stewart acknowledges the fast pace of the industry isn’t necessarily aligned with what creatives need to stay focused and true to their work. “I like being out there and being in the scene, but the actual art of creating fashion in my world is very slow,” she says of operating within the industry versus actually tending to her finely-crafted wares and client-focused business. “It’s a juxtaposition. Everything about RVNG is intimacy; one dress and one client at a time. Those relationships are what matter to me the most.”

Photography by Steve Blackburn.
Get the best of FASHION in your inbox Thanks for signing up!
The latest fashion, beauty and celeb news delivered right to your email #FASHIONforall Now, check your inbox to complete your subscription
We won’t ever use your email address for anything else
Want even more FASHION? Follow us on social media.