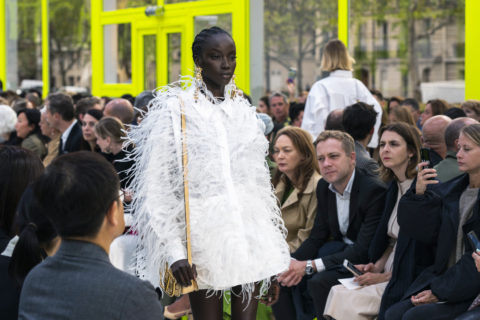 After men’s and couture fashion weeks were cancelled back in March due to the coronavirus pandemic, the fashion industry has been in a ‘will they? won’t they?’ state of flux ever since when it comes to the Spring 2021 fashion week schedule. And despite numerous brands signalling that they will not participate in upcoming fashion weeks or adhere to the traditional fashion calendar, Paris Fashion Week Spring 2021 is officially going ahead in September of this year.

The Fédération de la Haute Couture et de la Mode, the governing body of French fashion, announced that the Spring 2021 womenswear shows will be held from September 28 to October 6 with physical shows, supported by a digital platform. The organization said the event “will comply for its implementation to the recommendations of public authorities,” adding that “its organization will be completed by the platform set up for Paris Fashion Week online.”

There has been no further information shared about what the digital platform will look like, however digital couture week is slated for July 6-8 and men’s fashion week for July 9-13 (also in a virtual capacity) so chances are we’ll get a sneak peek at the tech in the coming weeks.

Though the schedule is yet to be released, Dior is almost certainly going to hold a show if recent comments by CEO Pietro Beccari are any indication. Whilst speaking of the brand’s decision to forge ahead with a Cruise 2021 show next month, Beccari said when it comes to the September shows, “We hope to be able to have some audience, if not a full room.”

As for the other fashion weeks, Burberry has said it will show during London Fashion Week, however with no audience present other than the models and Burberry team and that it will livestream the show to a global audience online. Fendi will kick off Milan Fashion Week with a show at its headquarters, however Gucci has confirmed it will not participate in the upcoming schedule. Michael Kors has also announced he won’t show during New York Fashion Week (for which no concrete plans have been announced as yet).