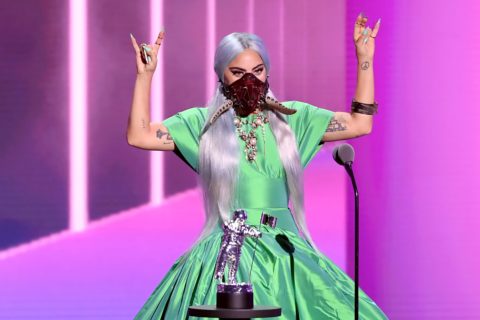 Lady Gaga can be counted on to make anything avant garde, and the Covid-era face masks she wore to the 2020 VMAs are no exception. The singer took to the MTV Video Music Awards red carpet last night wearing a silver circular Area coat, with a matching clear face shield/astronaut helmet by Conrad by Conrad. “I was wearing face shields before it was a thing ??”, she wrote in an Instagram post.

I was wearing face shields before it was a thing ?? #VMAs

Gaga—who made seven appearances over the course of the socially distanced, no-audience event in New York City—made multiple clothing changes, with new face masks chosen to match. To accept her Artist of the Year award, she wore a technicolour Iris Van Herpen dress with a pink face mask by Cecilio Castrillo, a Spanish designer who specializes in exclusive handmade leather pieces.

I can't be More Happy to See @ladygaga Wearing my Mask to Collect one of Her Awards @mtv @vmas Also I can't be More Thankful to these People who Believed in my Work @nicolaformichetti @marta.del.rio @theresidencyexperience #ladygaga #vmas #mtv #fashionaccessories #headpiece #awards #celebritystyle #fetishfashion #headwear #design #handmade #fashion

For the Song of the Year award, which she accepted for “Rain On Me,” the singer wore an emerald green ball gown by Christopher John Rogers and an oxblood pony skin Lance V. Moore mask with tusks.

A complementary double-shot of the red pony skin and horn mask @ladygaga wore at the VMA awards this year ; modeled by the amazing @_wicked_visions_ …thank you to @nicolaformichetti and @marta.del.rio for involving me and my work …feeling so blessed . "Red Horns" ponyskin mask by @lance.v.moore #couture #couturemasks #lancevictormoore #ladygaga #nicolaformichetti #vmas

For her medley “Chromatica” performance—during which Ariana Grande joined her, also in a mask—Gaga appeared in a pink and black bodysuit, with a mask by Diego Montoya. And finally, she wore a silver mesh Maison Met mask with her two final looks—a white tulle and feathered Valentino couture cape and a silver cape by Candice Cuoco, both worn over a silver bodysuit. For the latter appearance, she added a “jellyfish” crown by Lance V Moore.

Thanking everyone at the end while accepting her Tricon Award, Gaga said: “I might sound like a broken record, but wear a mask. It’s a sign of respect.”

Catch her full performance below:

Photo by Kevin Winter/MTV VMAs 2020/Getty Images for MTV
Get the best of FASHION in your inbox Thanks for signing up!
The latest fashion, beauty and celeb news delivered right to your email #FASHIONforall Now, check your inbox to complete your subscription
We won’t ever use your email address for anything else
Want even more FASHION? Follow us on social media.