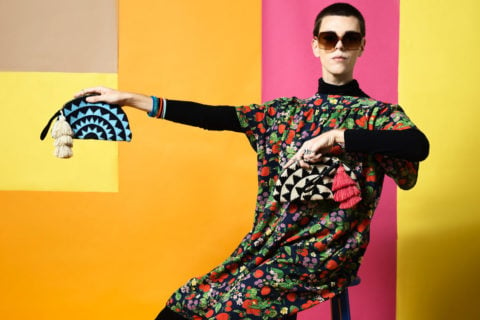 "It doesn’t matter how you identify – if you like something, wear it."

Since launching in 2019, Moncton-based e-tailer Caravan and Company has maintained a commitment to offering thoughtfully-crafted goods made primarily by women around the globe, including Wayuu bags from Colombia and bangles created from upcycled materials like flipflops and telephone wires that are produced in Mali.

Recently, founder Erin Keatch revealed a new campaign for the site that speaks to another key facet of importance in the fashion industry – inclusivity – by tapping local drag artist Samuel Landry (aka Mona Noose) to model the eclectic and eye-catching wares she sells.

“I came across Sam’s Instagram and there was something about his photos that struck me,” says Keatch, who previous to starting Caravan and Company designed for her own fashion label and other brands. “I really loved his look. Being in fashion for so long, you know when you see something that really resonates.”

Keatch “took a chance” and messaged Landry, who says he was flattered by the outreach. “The only type of modelling that I’ve ever really done was in university,” Landry says. “I’d sustain myself by doing live art modelling.” But even though he didn’t have what some would consider traditional industry cred, Landry’s experience as a drag performer means he’s used to posing for a picture. “It’s part of the gig,” he says, adding that his consumption of all manner of fashion media – including avidly watching America’s Next Top Model – also added to his familiarity with the tricks of the trade.

In fact, the unrelenting magnetism of the ‘90s supermodels was some of Landry’s primary inspiration when he started doing drag. “That kind of glamour was and is so fascinating,” he says. “In the beginning, I really wanted to capture the essence they had.” Yet he notes that two years on in his performing, he’s starting to branching out in terms of aesthetic. “I want to do stuff that goes against mainstream drag,” he says.

This permission to take chances is something Landry clearly relishes, particularly considering his background as a theatre student. “[That’s] a collective approach to making art,” he says. “Doing drag allows me to have a completely individual expression. I’m in charge and the whole look is me.” And Landry has been able to cultivate both a persona and a position in Moncton’s fledgling drag scene, which he and a former partner had a major part in nurturing.

“I am one of the founders of the scene as we know it today,” Landry says. “I work at the only queer club in the city. There were queens who’d come together and do stuff but it wasn’t consistent, and there wasn’t a generational torch-passing. A few years ago, me and my partner at the time decided that we both wanted to do drag; there’s no one that we could reach out to book us for gigs – we had to start from scratch. Now it’s taking off, and it’s so cool to see.”

Landry notes that performers in close-by locales such as Fredericton and Halifax have been very supportive of his foray into the craft. “There are queens from those cities that have helped us shine,” he says. And he highlights a backpacking trip across Europe that he took a few years ago as one that opened his eyes to the international drag scene – one that’s enjoying a surge of interest from a wider audience given the popularity of media wavemakers like Drag Race.

While drag is revelling in its current placement in pop culture, Landry is quick to point out that for every upside, like queens being able to book larger venues to sell-out audiences, there’s an element of appropriation that needs to be acknowledged as well. “It’s great that we finally have a platform,” he says. “And I’ve only benefitted from it since I started after it became widely popularized. So, I don’t know what the real struggle was.

“I’ve coined a term with my sister – the ‘RuPaul industrial complex’ – in that it’s heavily capitalist. Now you’re seeing [people] trademarking terms that the queer community has used for so many years – things that mostly originate from queer people of colour…. And I find that drag has also evolved in big cities like New York, where before it was queer people who were on the fringes of society and they would have houses together and they would pool their money just to pay rent so they could do drag. It was so, so, so punk. But just as punk culture became glamorized, like being able to buy a $2,000 leather jacket, drag has reached that level now.”

Ultimately, Landry has an upbeat outlook when considering the state of all kinds of creative output moving into the future. “Something that I’ve been seeing more, especially because of all the things that have happened this year, is not just inclusivity in terms of what we see,” he says. “It’s also [about] the people behind the camera, and being in the right rooms. That’s the only way we can push forward. The industry has had such a heteronormative, white community as its gatekeepers. We’re unpacking that, and getting to the root of unlearning the things the industry has told us in the past about how fashion should look and how it’s made.”

This last idea is something Keatch says motivated her to create Caravan and Company in the first place, and she echoes Landry’s sentiment when it comes to having optimism that as time goes on, more people will become accepting of alternative ideas about identity and self-expression. “I remember being into fashion at a young age,” she recalls. “There was one look – Californian, blonde and blue eyed.”

Being a petite brunette herself, Keatch found that standard of beauty completely unrelatable, and it wasn’t until the ‘90s ushered in a new spectrum of personalities to identify with that she started to feel the scope of recognition widening. “Since then, there’s been a slow progression of people being more accepting,” she says. “And we can’t go back – the door has been opened. I really believe fashion is for everyone, and I hope that’s what people perceive Caravan and Company as…an inclusive brand where it doesn’t matter how you identify – if you like something, wear it.”

Photography by Denis Duquette.
Get the best of FASHION in your inbox Thanks for signing up!
The latest fashion, beauty and celeb news delivered right to your email #FASHIONforall Now, check your inbox to complete your subscription
We won’t ever use your email address for anything else
Want even more FASHION? Follow us on social media.