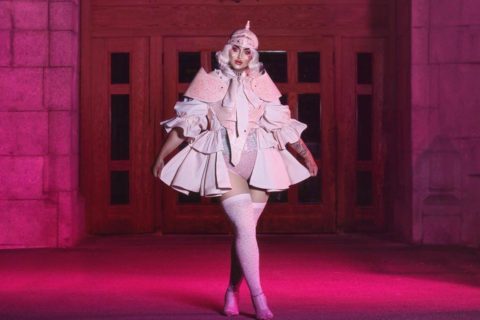 For those who’ve been following Canada’s Drag Race and wonder who’s behind the dramatic look worn by contestant Ilona Verley in the show’s promo images, Evan Clayton is your name to know. The Vancouver-based creative–who graduated from the city’s Blanche Macdonald Centre and launched his label in 2013–has dressed more of the country’s other beloved queens including Tynomi Banks and Juice Boxx, and his designs have appeared on other Drag Race darlings like Naomi Smalls, and performers like Jessie Reyez and Kali Uchis. FASHION caught up with Clayton to talk about his work with the drag community, the philosophy behind his eponymous brand, and where he finds inspiration.

Tell me about your path to becoming a designer; was it something you always dreamed of doing?

I was definitely a very creative child and had a love for fashion. I read many magazines, and started thinking about having a career in fashion when I was maybe 13 or 14. But I was torn because all the way through high school, I wasn’t sure if I wanted to get into fashion or into science and go to school for marine biology. When it came time to decide what path to take, I thought to myself, Blanche is my dream school, and if I don’t get in, I’ll go to school for marine biology. I graduated from Blanche’s fashion design program in 2011 and started my line in 2013; I’ve been showing consistently since then, with this season being my 15th collection.

It’s interesting that you say you were into science–a lot of designers I speak to tell me they were studying or working in that field before getting into fashion. How do those two worlds intersect?

I think there is a lot of science and math in what I do. When I’m not sewing, I’m drafting, and drafting is all math. And I find myself very inspired by nature. Maybe it’s cliché to say, but this idea of ‘nature is the greatest designer’–it’s true!

Aside from nature, tell me about your other influences. How did you start working with the drag community, and how does that world of design factor into your creative process and other work?

I’ve always been a very theatrical person; all through high school I was in drama. I remember the very first time I saw drag–it was before Drag Race was the cultural phenomenon it is today. I was channel surfing and saw the season one episode when Ongina came out as HIV positive. That was the first time I’d ever seen a queer person represented on TV when they weren’t the butt end of a joke, or it wasn’t the notion of having a tragic storyline just for the sake of having one. Seeing that, and seeing these people who media had shown me all my life as a joke as being an actual creative force and having talent and heart and beauty, that started to foster my love for drag.

Moving to Vancouver, my social life was the drag scene. All my closest friends are drag artists, or work with them. I’ve been putting drag queens in my runway shows since 2014; and it’s snowballed from there, from being a fun thing in my shows to making a career in making costumes for drag artists both locally and internally. It keeps building, and now that Drag Race has come to Canada, it’s going to keep expanding. The Canadian drag community is so small, especially compared to the States. I knew half of the cast on Canada’s Drag Race!

In terms of designing for drag artists for a stage show versus television or runway, how are those processes different?

It’s quite different, and it depends on the individual artist as well. Something I make for the runway isn’t going to necessarily work for stage–there are a lot technical aspects to making clothes for drag. There are a lot of elements to be mindful of: nylons; are they going to be wearing a breastplate?; are they going to be wearing a corset or padding?; what wig are they wearing? If they’re not wearing a human hair wig, they probably can’t wear sequins. There’s a lot of things to juggle when you’re designing stage costumes, whereas on the runway, if they’re just going to be walking for 40 seconds and then wearing it backstage, it’s more chill.

❄? ICE COLD HEART ?❄ . @ilonaverley in a custom cartridge pleated brocade gown, paired with a thermoplastic armored bust and swordtip glove for @canadasdragrace. . THE CAT IS OUT OF THE BAG! Ilona is a contestant on the inaugural season of Drag Race Canada! I've been lucky enough to work with this talented queen on a few looks, but to have her trust me with the first look the world gets to see her in is a true honor, and one I can't thank her enough for. I wanted to portray her in powder blue, her signature color, but in a tough as nails armored look to match her badass persona. Regal, yet stern. She has a fucking message, and I can't WAIT to watch her share it with the world! . ?: @mattbarnesphoto ?: @littlejohnnyr ?: @ampedaccessories . . . . #fashion #drag #dragqueen #ilona #ilonaverley #dragrace #dragracecanada #canadasdragrace #brocade #armor #armour #sword #glove

Is there an outfit from Drag Race Canada that you’re particularly proud of, perhaps because it presented a conceptual challenge?

There are two in particular that I know made it on to the show. The first is Ilona’s promo look, the powder blue armour set; that wasn’t a conceptual challenge because I’d based it on some looks I’d done from a few seasons past, but it was a challenge in terms of construction because we only had three days to complete it.

Another piece I’m proud of is on next week’s episode–it’s a look that we did based on a runway look that I did a few years ago; I feel that’s authentically me and it’s a good representation of who I am as a designer.

Let’s talk about style and self-expression. How do all the influences you have get distilled into your creations?

At the very core of the ethos of the brand, and also me as a person, is honesty. If a design doesn’t feel right for me and for the performer, I’m not going to do it. I’ll find a way to make it right. And that extends to my runway shows–I’m not trying to paint a delusion, and I’m not trying to create a fictional reality–the pieces I make are a very honest representation of who I am as a person and what my morals and ethics are. And I think that especially in drag, and in Vancouver drag, that’s a very visual thing. You look at the drag troupe, The Darlings; I just dressed them for a collaboration they did with the Vancouver Symphony Orchestra. I had to sit down and say, “What story are you trying to tell and how can my voice add to it?” If it doesn’t add anything, then why are you including my voice?

In terms of your approach as a designer, are you interested in the traditional fashion model of doing runway shows and several seasons of collections a year? Or are you happy doing your own thing?

My business has always been a bit of an odd duck; I’ve never really fit into the wholesale market because of budget. I was doing so much custom work, that was really the driving monetary force behind my brand. I was doing runway shows because I love them, not because I felt like I had to.

My runway shows are a kind of therapy for me; you can look at a specific show and you can see where my mindset was at the time I was creating that collection. I did a collection a few years ago where I wanted to focus on ready-to-wear for wholesale, and then have a few dramatic pieces at the end. What I learned from that show was that nobody cared about the wholesale pieces–only the fun pieces. That was kind of the nail in the coffin for me trying to fit into the fashion system.

I actually had a runway show planned that was going to happen last week but it obviously didn’t because of COVID; we’d been planning it since November, and then I had to pull the plug on it. I thought, do I show this in another format? Do I do a video? Do I just do a photoshoot? I’m just going to hold on to it until I can release it in a way I see fit, because I have a whole experience planned for it that extends a bit past the runway. I’ll be very patient about it until we can gather in numbers greater than 50.

You’ve mentioned how meaningful seeing Drag Race for the first time, and now being part of the show, was for you. What are you hopeful for coming out of 2020 in terms of inclusion, representation, and other similar issues that have really been brought to the forefront recently?

I’m very hopeful to see more inclusion, not just on Drag Race but in media in general. It’s so amazing that Ilona was cast on Canada’s Drag Race as an Indigenous trans two-spirit person who’s very open about her status as exactly that; and she’s not afraid of sharing the struggles and letting people know what is happening in those communities. I think [the show] has done a good job of representing these stories. I remember watching Anastarzia [Anaquway]’s story about her upbringing, and coming to Canada and seeking asylum, and becoming the star she is today. That’s really inspiring and something I’d love to see continued not just in future seasons of Drag Race Canada–I think in Canadian media, we’ve always been a bit ahead of the curve in terms of showing diverse communities–but I’d love to see it extend to the American version as well; that’s the big money-maker, and I don’t think putting Gia Gunn in a season of All-Stars is going to quench the fire of Ru Paul saying he’d never cast a trans person on Drag Race. It’s not the same thing as casting an undiscovered trans talent that deserves to be on the show.

Photography by Fernando Cysneiros.
Get the best of FASHION in your inbox Thanks for signing up!
The latest fashion, beauty and celeb news delivered right to your email #FASHIONforall Now, check your inbox to complete your subscription
We won’t ever use your email address for anything else
Want even more FASHION? Follow us on social media.