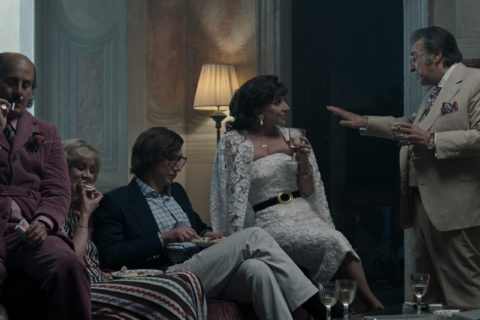 The Gucci Heirs Do Not Approve of House of Gucci

The family called the film an insult to its legacy.

The Gucci family has watched House of Gucci, and the verdict is not good.

Ridley Scott’s highly anticipated biographical crime drama was met with a lukewarm reception when it hit theatres last week. And its most notable review came from the family of former Gucci chairman and patriarch Aldo Gucci.

On November 29, the family released a statement claiming House of Gucci “is extremely painful from a human point of view and an insult to the legacy on which the brand is built today.”

The statement, which was first published by Italian news agency ANSA and obtained by Variety, laments that the film did not “did not bother to consult the heirs.” It went on to say House of Gucci inaccurately portrayed family members including Aldo Gucci (played by Al Pacino) “as thugs who were ignorant and insensitive to the world around them.”

Depicting the downfall of the Italian fashion dynasty, House of Gucci tells the story of Patrizia Reggiano, who was convicted of having Maurizio Gucci (her ex-husband and heir to the fashion house) murdered in 1995.

Notably, the family aired their grievances over the film’s representation of Reggiano, played by Lady Gaga, noting that the character “is portrayed not just in the film, but also in statements from cast members, as a victim trying to survive in a male and male chauvinist corporate culture.” They said this characterization “couldn’t be further from the truth.”

Gaga, who adopted a method acting approach for the role, previously shared her take on Patrizia’s motives, saying in an interview with ABC News that she doesn’t believe Patrizia killed for money, but for love and survival. And her on-screen depiction of the stylish criminal has generated a devoted fan base. At the film’s premiere, Gaga famously said, “I don’t believe in the glorification of murder. I do believe in the empowerment of women,” a line that has since gone viral on TikTok.

#LadyGaga on her role in HouseOfGucci. 📷: AP

The Gucci heirs’ statement hinted at legal action, saying, “the members of the Gucci family reserve the right to take action to protect the name, image, and dignity of themselves and their loved ones.” But they have not publicly pursued that recourse yet.

House of Gucci enlisted a star-studded cast to portray the high-profile Italian family. Along with Pacino and Gaga, Maurizio Gucci is played by Adam Driver, while Jared Leto dons prosthetics in the role of Paolo Gucci — the former vice-president and managing director of Gucci Shops Inc. who is “considered incompetent” by family members, notes ScreenRant.

The film is satirical and campy in nature, bringing humour to an undeniably dark crime. After viewing the film, designer Tom Ford also voiced his disdain for this portrayal. Ford, who was the creative director of Gucci between 1994 and 2004 and knew Maurizio Gucci well, wrote in Air Mail magazine that he was “deeply sad for several days” after viewing it and that it was hard for him to “see the humour and camp” in the situation.

Nonetheless, as Ford points out in his statement, the Gucci name sells. And the media attention surrounding House of Gucci has generated a definitive stream of publicity for the luxury fashion house.

The film is dripping in Gucci looks — including vintage items from the fashion house’s archives. According to global fashion marketplace lovethesales, demand for Gucci-branded items has spiked since the film’s release, with an increase in searches for “Gucci dresses,” “Gucci bags,” “Gucci slides” and “Gucci clothes” in general. But despite lending items from the archives and allowing the crew to film in a Gucci store, the fashion house has intentionally maintained a safe distance from the contentious project, reports Business of Fashion.

"She had 54 different changes, and she didn’t repeat the same thing, ever." pic.twitter.com/U41JNiPRss

On November 22, Scott gave a response to Patrizia Gucci, Maurizio’s second cousin, who accused the director of “stealing the identity of a family to make a profit.” To this, he said on BBC Radio 4, “I don’t engage with that,” and went on to say the Gucci family is “part of the public domain.”

And in a recent interview with Total Film, Scott was quoted as saying: “I tried to be as respectful as possible by being as factual as possible, and as factual as we can possibly imagine. Time and space sometimes has to jump because of the nature of the length of the film. But the people that were writing from the family to us at the onset were alarmingly insulting, saying that Al Pacino did not represent physically Aldo Gucci in any shape or form. And yet, frankly, how could they be better represented than by Al Pacino? Excuse me! You probably have the best actors in the world, you should be so f*****g lucky.”

Gaga, too, has responded to complaints from Patrizia Reggiano, who said earlier this year she was “annoyed” that the actor didn’t reach out to meet with her. “I didn’t want to meet her because I could tell very quickly that this woman wanted to be glorified for this murder,” she told ABC News. “I didn’t want to collude with something that I don’t believe in.”

Since promotion for House of Gucci began, the film has had its fair share of controversies. So, naturally, its release garnered plenty of criticism — especially from those who lived in proximity to the events being detailed. The contention doesn’t seem to take away from the film’s popularity, though.

As the saying goes, all publicity is good publicity…right?