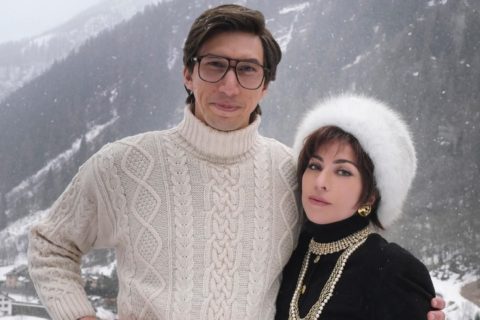 Everything We Know About House of Gucci

The upcoming film starring Lady Gaga and Adam Driver features a murder, a trial and a whole lot of incredible fashion as it tells the story behind the infamous Gucci killing-for-hire plot.

By Natalie Michie and Meaghan Wray

This article was originally published on March 10, 2021.

It’s been three years since Lady Gaga’s Oscar-winning performance in A Star Is Born, and she’s headed back to the big screen alongside Adam Driver for a juicy — and stylish — Italian murder mystery, set against the backdrop of the glamorous Gucci family life, called House of Gucci.

The film follows the story of Patrizia Reggiano, Maurizio Gucci’s ex-wife, who plotted to kill her husband Maurizio Gucci, the grandson of fashion designer Guccio Gucci and heir to the fashion house. Here, everything we know so far about the 2021 film, out this winter.

When will House of Gucci be released?

The murder mystery is set to be released on November 24, according to its IMDB page. While many film release dates have been pushed back because of COVID-19, the on-time release of this one seems promising, given they’re clearly still in production. The film drops right around the fashion house’s 100th anniversary.

Who is starring in House of Gucci?

The film is stacked with other big names aside from Lady Gaga (Patrizia Reggiani) and Adam Driver (Maurizio Gucci). Jared Leto will be staring as Paolo Gucci, the former vice-president and managing director of both Gucci Shops Inc. and Gucci Parfums of America. Al Pacino will play Guccio Gucci’s eldest son Aldo Gucci, who was the chairman of Gucci Shops Inc. from 1953 to 1986.

Florence Andrews and Jeremy Irons will star as Jenny and Rodolfo Gucci, respectively, while Camille Cottin will play Paola Franchi, girlfriend to Maurizio. Youssef Kerkour, of the Netflix series Marcella and Sex Education, will play Nemir Kirdar, an Iraqi businessman and financier who founded a private equity firm that once owned Gucci, among other big names like Tiffany and Co. and Saks Fifth Avenue.

At one point pre-production, both Penelope Cruz and Margot Robbie were in the running to play Patrizia, while Leonardo DiCaprio was once rumoured to star as Maurizio.

Is there a House of Gucci trailer yet?

Indeed! The trailer, which was released on July 29, gives viewers a glimpse into the film’s luxurious fashion and lush scenery, narrated by an Italian-accent donning Gaga. At just over two minutes, the trailer brings us into the drama-filled world of the Gucci dynasty while showcasing Patrizia Reggiani’s over-the-top nature. Fans have already picked up on quotable one-liners such as, “I don’t consider myself to be a particularly ethical person, but I am fair,” as said by an unbothered Reggiani while she nonchalantly stirs and sips an espresso. Iconic behaviour.

What kind of fashion can we expect in the film?

All the Italian camp-meets-couture goodness! Since the film’s on-set ski resort picture of Lady Gaga and Adam Driver first made its rounds on the internet in March, fans have been expecting nothing but the best 1980s-era fashion of the film — and that’s just what we are getting. House of Gucci costume designer, Oscar-winner Janty Yates, is taking full advantage of her access to the Gucci archives for the film’s well-dressed characters. In anticipation of its release, the fashion house posted an outtake from the film, where Gaga is donning a long-sleeved dress from its archives.

Along with drawing from the Gucci archives, Gaga sports other notable vintage looks, like a 1980s black and pink polka-dot dress with puff shoulders by French designer Emanuel Ungaro. Yates also reimagined some of Reggiani’s original looks, like a pink silk ballgown recreated for the film in red and accessorized with an extravagant necklace by Bulgari.

I love how they recreated this silk faille dress but made it red! pic.twitter.com/kbnW0BxbiX

Is House of Gucci based on a true story?

The screenplay is based on the 2001 book House of Gucci: A Sensational Story of Murder, Madness, Glamour, and Greed by Sarah G. Forden. An Italian fashion journalist for more than 15 years, Forden chronicles the gripping story of the ascent, collapse and resurrection of the Gucci dynasty, taking readers behind the scenes of the trial and family life.

Maurizio was shot and killed by a hitman hired by Patrizia on the steps outside his Milan office in 1995. She became known as the “Black Widow” and was sentenced to 29 years in prison. Her sentence was later reduced to 26 years after her daughters, Allegra and Alessandra, claimed her brain tumour affected her ability to reason.

What do the real Guccis think about the film?

The Gucci brand is now owned by French-based corporation Kering, and not the Gucci family. Despite the fashion house’s apparent participation in the film, the Gucci family has spoken out about their concern regarding its portrayal of their relatives.

Patrizia Gucci, Maurizio’s second cousin, told the Associated Press that the family is “truly disappointed” in the biopic. “They are stealing the identity of a family to make a profit, to increase the income of the Hollywood system….Our family has an identity, privacy. We can talk about everything. But there is a borderline that cannot be crossed,” she said. Patrizia Reggiani also responded to the film, saying she was “annoyed” that Lady Gaga didn’t consult her before taking on the role.

Where is House of Gucci being filmed?

No surprises here, the film is being mostly shot in Italy where the fashion house was born. Twitter fan account @GagaMediaDotNet shared BTS photos of Gaga as Patrizia, wearing a chic red jumpsuit.

Other fan and film update Twitter accounts have shared photos of the co-stars shooting in Milan and Gressoney as well.

Who is producing House of Gucci?

Ridley and Giannina Scott will be producing the film through their company Scott Free Productions. Ridley Scott is known for his work on films like Alien, Blade Runner, Gladiator, Thelma & Louise, The Martian and more.