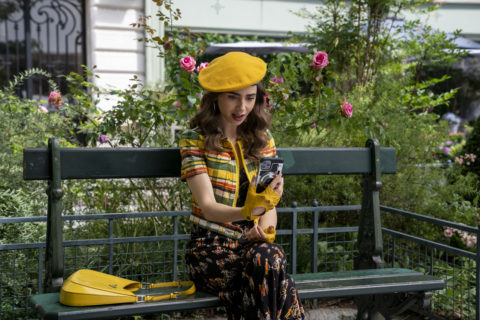 It's time to channel your inner Emily Cooper.

Emily in Paris was easily one of the most binge-watched shows of 2020. From the stunning cinematography showcasing the French capital to the ogle-worthy fashion looks sported by protagonist Emily Cooper (Lily Collins), the comedy was a welcome escape during the pandemic, and left many of us wanting more. Now, with the show returning for a second season on December 22, fans will soon be able to dress like a character straight out of the series thanks to an online store that will sell merchandise from the show’s wardrobe. As Emily might say, c’est magnifique!

On November 3, WWD reported that Netflix and ViacomCBS have teamed up to launch the store, which will sell pieces from some of the luxury fashion houses featured on Emily in Paris. Participating brands include AZ Factory, Eye M by Ileana Makri and Zeus+Dione, as well as with Chanel-owned labels like Barrie, Maison Michel, Goossens Paris and Causse Gantier.

A few items up for grabs have been worn by Collins and other actors on the show, including Ashley Park (who plays Emily’s confidante, Mindy Chen) and Philippine Leroy-Beaulieu aka Sylvie Grateau, Emily’s intimidating boss, and Camille Razat, who plays the lead’s kind-hearted friend Camille.

The project is being run by Mint Group, a Paris-based buying office, that will also be curating the product selection based on consultations with costume designers Patricia Field and Marilyn Fitoussi, as per WWD.

For those of you who need a plot refresher, Emily in Paris follows a 22-year-old American marketing exec who is sent to work for her company’s newly acquired firm in Paris. With little knowledge of France or the language, Emily fashionably stumbles her way through this new adventure abroad. Created by producer Darren Star (of Sex and the City), Emily in Paris has a luxury-filled aesthetic and purposely fluffy plot that’s easy to get lost in. Protagonist Emily has also been compared to SATC’s Carrie Bradshaw many times, from her daring fashion moments to her almost laughable lack of self awareness.

After season one, Emily in Paris was criticized for depicting an ultra-Americanized (and super white) version of the city, complete with clichés about French people and an obvious lack of racial diversity. Ahead of the show’s season two premiere, Collins, who is a producer, told Elle UK that those criticisms have been taken to heart. “I really wanted diversity and inclusion in front of and behind the camera to be something that we really put our focus on, in a lot of ways,” she said. “Hiring new people in front of the camera, also giving new storylines to different characters, which was really important.’” As Emily in Paris returns with (hopefully) improved representation, fans will be able to indulge in the show in more ways than one by channeling what is arguably its most redeeming quality: the fashion.

Merchandise will be sold on Netflix.com and saks.com, in addition to each vendor’s respective e-commerce site. There will also be select retail locations, as reported by WWD, with more products expected to arrive in the new year. Prices will vary; A box of specialty macaroons is priced at around $45, while a pair of luxury Roberto Coin earrings will cost you $10,500. Some items will have subtle Emily in Paris branding, so fans can truly channel the show’s star.

With lots and lots of fan accounts dedicated to Emily’s outfits alone, we can make an educated guess that the costume-inspired merchandise will be a hit. Emily in Paris is not the first show to tap into the fashion influence it has on viewers. In August, Netflix’s period drama Bridgerton announced it would be releasing a line of footwear and accessories inspired by the Regency-style clothing in the show. We can’t help but wonder, is the costume-to-merchandise pipeline the future of TV? If so, we’re not complaining.

Photography courtesy of CAROLE BETHUEL/NETFLIX
Get the best of FASHION in your inbox Thanks for signing up!
The latest fashion, beauty and celeb news delivered right to your email #FASHIONforall Now, check your inbox to complete your subscription
We won’t ever use your email address for anything else
Want even more FASHION? Follow us on social media.