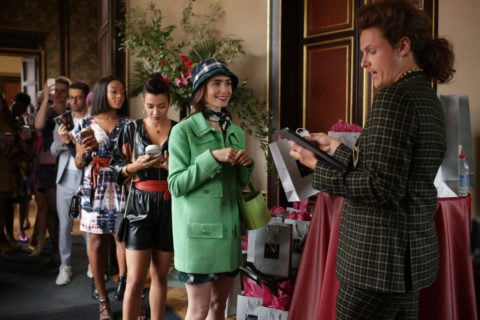 If, like much of the FASHION team, you spent your weekend binge-watching Netflix’s new original show Emily in Paris then it’s likely that, like us, you’re on a bit of a fashion high. The new show is set in Paris and follows Emily Cooper, a 20-something marketing exec from Chicago sent to work for the new Parisian firm the company has acquired. Without giving too much away, drama ensues in the fashion capital as she tries to find her way in a foreign city for the first time – but storylines aside, the costuming for the series is balm for our fashion-starved souls.

Patricia Field, the legendary costume designer responsible for the iconic wardrobes on Sex and the City, as well as Younger, is the woman behind the looks on the show. From Chanel tweed coats to Stephane Rolland couture, an Audrey Hepburn-inspired Christian Siriano gown, quirky prints courtesy of Alice + Olivia, Veronica Beard suiting and more, there’s no shortage of stylish moments to take inspiration from for your next outing – or even your next Zoom call.

See some of our favourite outfits from Emily in Paris below:

Episode one: For her first day in the office, Emily leans into the Parisian theme, sporting an Eiffel Tower-printed shirt from Alice + Olivia teamed with a Ronny Kobo skirt, Aldo handbag and Christian Louboutin pumps.

Episode one: Emily’s love of brights and patterns is well-documented throughout the series, and this Ganni two-piece look, finished with a wide waist belt from Rag & Bone, is one of our favourites.

Episode two: To attend her first big event in the city, Emily has a Carrie Bradshaw moment in a statement tulle skirt paired with an Alexandre Vauthier top.

Episode four: For a young marketing exec, Emily sure owns a lot of Chanel ready-to-wear. Here, she wears a leather jacket and bag from the brand’s Fall 2017 collection, which she teams up with a gown-turned-mini-dress by Dope Tavio.

Episode four: Take a leaf out of Emily’s book and match your coat to your blooms on your next fall outing. This hot pink beauty is from Kenzo.

Episode five: One of the best looks of the series is Mindy’s cool, shoulder-less plaid suit – which was a custom design by Patricia Fields.

Episode five: One of our favourite looks from the whole show, Emily wears a peppy green tweed coat from Chanel’s Resort 2020 collection, teamed with a Staud bucket bag and Christian Louboutin pumps.

Episode five: Cami is the epitome of nonchalantly cool French girl style (her style for the show was inspired by Caroline de Maigret) – and this See by Chloé mini dress, paired with a polka dot power sleeve top proves it.

Episode six: Like Emily, Mindy isn’t afraid of a bold print – and we love this IRO mini wrap dress, perfectly accessorized with a soft pink hat (which is actually actress Ashley Park’s own hat).

Episode six: For a night at the ballet, Emily channels her inner Audrey Hepburn in this Pre-Fall 2019 gown from Christian Siriano and shoes by Cosmoparis.

Episode seven: Sylvie becomes the queen of the leg slit across the series and she wears this one-shoulder green number very well.

Episode eight: On a trip to Camille’s family chateau, Emily nails cozy chic in a sweater by Essentiel Antwerp and rainboots by Aigle.

Episode nine: At the Americans Friends of the Louvre charity auction, Emily wears a piece by the show’s fictional designer Pierre Cadault for her turn as a model – but in real life, the stunning design is by Stephane Rolland.

Episode 10: For one of her final looks of the season, Emily chooses a printed puffer by Off-White that has gone straight to the top of our winter wish lists.

Finished Emily in Paris and looking for your next binge? Here’s our round-up of the top shows and movies to stream this month.