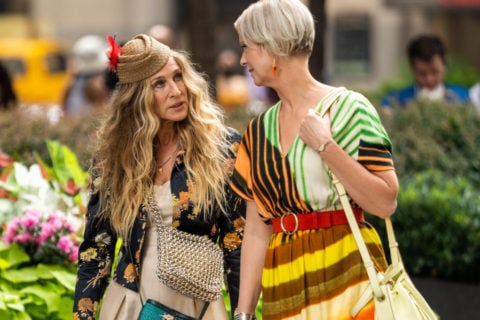 And Just Like That… is Influencing How We Shop

The "Sex and the City" reboot is carrying on the series’ influential fashion legacy.

When word of a Sex and the City reboot spread earlier this year, we knew we were in for some much-needed over-the-top outfits. As expected, since the series premiered on December 9, social media has been sent ablaze with shocking plot twists, dynamic new characters and, of course, to-die-for clothes.

New outfits, new friends and old flames. Catch up with #CarrieBradshaw in #AndJustLikeThat… A New Chapter of Sex and the City, now streaming on @Hbomax. pic.twitter.com/jhpEGecY3i

The show – of which two new episodes air on HBO Max every Thursday – revisits best friends Carrie Bradshaw (Sarah Jessica Parker), Miranda Hobbes (Cynthia Nixon) and Charlotte York (Kristin Davis) as they navigate life in New York City in their 50s. Almost immediately, the characters acknowledge the absence of Samantha Jones (Kim Cattrall) by stating that she moved to London and no longer talks to her former friends. (Not the kindest send-off, but that’s beside the point.)

Despite being entirely different than the Sex and the City that rose to popularity in the late ‘90s, styling team Molly Rogers and Danny Santiago have taken it upon themselves to ensure that And Just Like That… carries on (get it?) the series’ iconic fashion legacy.

The bold wardrobe featured in the reboot is re-energizing fashion lovers everywhere thanks to its bright colours and patterns and modern silhouettes.

In true Sex and the City fashion, our favourite New York City fashionistas are sporting many designer pieces, and the opening scene alone inspired a surge in luxury fashion searches. Miranda — now rocking silver hair — wore a balloon bag from the Spanish label Loewe, and the brand has since seen a 168 per cent increase in searches, according to global fashion marketplace Love the Sales. After Carrie sported a Dries van Noten floral-print jacket in the same scene, the label had a 1,150 per cent increase in searches.

The show has also inspired a spike in searches for the general styles worn by the characters, including “halter neck jumpsuits,” “linen jumpsuits,” “pink dresses” and “white skirts.”

Fashion aside, And Just Like That… examines the ways the women would have changed since 2010, when Sex and the City 2 hit theatres. Carrie, once not a fan of technology, now has a podcasting job and two smartphones. She also tells her friends about her rising Instagram follower count — a hint at her future career as an influencer, perhaps?

Social media’s role in fashion is further acknowledged when we meet the show’s first newcomer, Charlotte’s friend Lisa Todd Wexley (Nicole Ari Parker). Wexley’s love for statement jewelry is established right away when she’s seen in an oversized red chain necklace, chunky gold rings and a bracelet that she bought from a young artist on Instagram.

You can’t do it all, unless of course you’re #LTW. Meet the new faces of #AndJustLikeThat… now on @hbomax! pic.twitter.com/wJYyCjlHv5

Along with these modernized changes, there’s a lot of nostalgic fashion, especially when it comes to the series’ lead, Carrie. Her reputation for wearing heels with just about every outfit remains intact as she struts around the city in impossibly high pumps — from bedazzled strappy sandals and woven platform heels by luxury shoe brand Aquazzura.

We don’t understand it, but we respect it, because these reliably over-the-top footwear choices are so unapologetically Carrie Bradshaw. Of course, she also dons her famous Manolo Blahniks, searches for which rose 391 per cent after the premiere.

The Manolos made an even bigger emotional impact in the first episode, when Carrie wears her wedding shoes during a shocking plot twist (hint: it’s the one involving Mr. Big and Peloton).

While we welcome these doses of nostalgia, the show’s fashion choices also speak to the present. And Just Like That… takes place in a post-pandemic world, and apart from a few comments acknowledging it happened, the series establishes that COVID-19 is a thing of the past. (Naturally, Carrie adopted her own stylish method of protection: bedazzled gloves to avoid directly touching public surfaces.)

And just like that, the fashion in Sex and the City has yet again taken over our lives. TBH, we’re okay with that.

Photography courtesy of Gotham/GC Images
Get the best of FASHION in your inbox Thanks for signing up!
The latest fashion, beauty and celeb news delivered right to your email #FASHIONforall Now, check your inbox to complete your subscription
We won’t ever use your email address for anything else
Want even more FASHION? Follow us on social media.