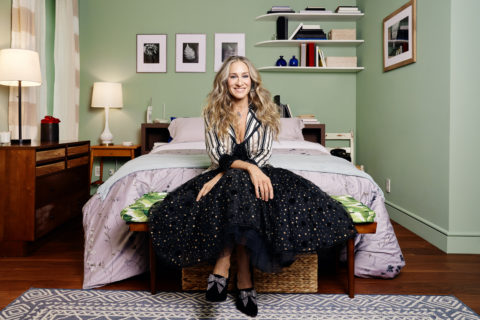 You Can Stay at Carrie’s Sex and the City Pad, but Leave Her Money Woes at the Door

The columnist's relationship with finances was problematic.

Ah, to live like Carrie Bradshaw. The leading lady of Sex and the City, played by Sarah Jessica Parker, seemed to exist in a world where a lavish lifestyle was easily attainable, regardless of her bank account balance (as we know, she preferred her money hanging in her closet).

Now, with the series’ HBO Max revival And Just Like That… slated to drop in December, Sex and the City fans can look forward to being immersed once again in the life of Carrie Bradshaw…literally. As announced by SJP on Instagram, Airbnb has recreated the unlucky-in-love columnist’s Upper East Side brownstone pad in Chelsea, complete with various knick-knacks seen in the original show — including a closet full of designer items and her work laptop propped open on the desk. The best part? Fans can win the chance to rent a night in the famed apartment.

As we reminisce about the many cosmopolitans, flings and fights had in Carrie’s rent-controlled gem, photos of the reimagined one bedroom serve as a reminder of the writer’s expensive lifestyle.

Set in present day, the reboot will follow Carrie, Miranda Hobbes (Cynthia Nixon) and Charlotte York (Kristin Davis) as the trio navigate life in their 50s (sadly, Kim Cattrall will not be reprising her role as Samantha Jones), looking fabulous as ever. If we remember the start of the series, however, Carrie had just one column per week for a lesser known New York newspaper. As this was her only source of income, there’s just no way she would be have been able to afford the lifestyle she was portrayed to live two decades ago. In the lead up to the revival, we look back at the unrealistic (and sometimes problematic) portrayal of money in Sex and the City.

All the designer clothes

Carrie’s love for luxury clothing practically defined her character. The writer’s fashion-forward wardrobe was always filled with brand-new designer pieces. Perhaps most memorable was her love for Manolo Blahnik shoes — which got a major shout-out in season three when Carrie, walking down an alleyway in broad daylight, is robbed at gunpoint. The mugger tells her to hand over her sandals, and despite the fact that he’s pointing a gun at her, she still struggles to give the shoes up, pleading desperately, “Please sir, they’re my favourite pair!” According to Forbes, the shoe brand and other luxury labels like Jimmy Choo and Christian Louboutin became household names thanks to the praise the brands received on SATC. The show conveyed the idea that sporting a designer wardrobe is an essential part of living your best life in a big city, even if it’s beyond your means.

Sex and the City’s famous foursome had some of their best moments over brunch. It was a time for the friends to vent (like when Carrie angrily shared her post-it breakup) and discuss exciting life updates (like Miranda’s pregnancy announcement). But it seemed as though the women of Sex and the City preferred to splurge on take out and restaurants on a regular basis (Carrie even proudly admitted to using her oven to store clothes), so it’s safe to say there’s not much home cooking happening. Plus, Carrie, Miranda, Charlotte and Samantha would meet up for a round of cocktails on what seems like a nightly basis, always going to the city’s hottest new spots. I am never one to oppose brunch (or a Cosmopolitan), but financially, it just doesn’t add up!

This brings us back to the apartment, and there’s a lot to unpack. The logistics of Carrie renting an NYC apartment on her own with one writing gig is unrealistic at best. But we see just how financially unaware she is when she tries to buy the unit. In season four, her apartment is put up for sale, but with basically no savings or emergency fund, she can’t afford to purchase her beloved rental. In this episode, Miranda calculates that Carrie had spent $40,000 on shoes alone since moving to the city (this pains me to write). Carrie is first given a cheque by her millionaire ex-boyfriend, known as Mr. Big, but ultimately decides not to cash it. With little financial literacy, she decides to pressure her newly divorced pal Charlotte into loaning the money to her, despite Charlotte’s discomfort with mixing finance and friendship.

The show conveys the message that if you’re in a pinch, you can probably get money from the uber wealthy man in your life. And if not, simply accost your friends! After the loan is given, it’s never mentioned again. Did Carrie repay Charlotte? Did their friendship suffer because of this financial burden? In this version of reality, I guess it doesn’t matter.

Carrie ends up marrying the wealthy Mr. Big, thus securing the money to live out her lavish lifestyle without ever having to worry. The message is murky, as Carrie herself never develops a sense of financial responsibility. While we love Sex and the City for all its virtues, Carrie’s toxic relationship with money is not one of them.