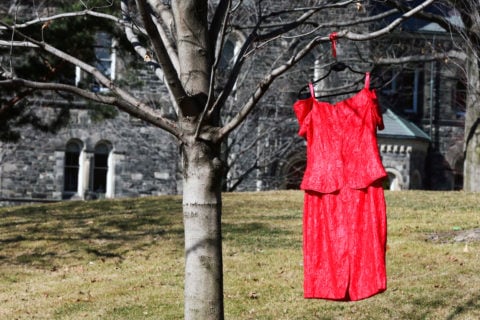 Here’s What You Should Know About Red Dress Day

Plus, how non-Indigenous Canadians can show their support beyond May 5.

Every year at the start of May, red dresses can be seen hanging from trees, statues and front doors across Canada. These hollow vermilion silhouettes make a sartorial statement on the epidemic of missing and murdered Indigenous women, girls and two-spirit people.

The National Day of Awareness for Missing and Murdered Indigenous Women, Girls and Two-Spirit People (MMIWG2S) is widely recognized as Red Dress Day, and Canadians are encouraged to hang and wear red as a means of drawing attention to gendered and racialized crimes against Indigenous peoples.

“The red dress itself is a visual reminder of the staggering number of Indigenous women who are no longer with us,” explains Cory Hunlin, a two-spirit Tsilhqot’in artist. “I have been raised by powerful Indigenous women: my mom, grandma, aunties and relatives. [They] have all been affected by the residential school system. So for me, to see what’s still going on today is heart-wrenching and hits close to home.”

The annual observation of Red Dress Day came from The REDress Project, an art installation created by Métis artist Jamie Black in 2010. The exhibit of empty hanging red dresses has since traveled to different cities across North America. Over a decade later, Red Dress Day remains a means of recognizing those that have been lost while raising awareness around ongoing calls for justice.

In 2019, the Canadian government released the National Inquiry into MMIWG2S. ​​The report gathered the stories of nearly 2,400 people, including experts, survivors and family members of those who have been lost. It stated that systemic violence towards Indigenous women has resulted in a lack of safety and security, leaving them disproportionately vulnerable.

The report outlined 231 individual Calls for Justice, which include addressing intergenerational trauma, marginalization and the disregard for Indigenous women, girls and 2SLGBTQ+ people.

This is why understanding the significance behind occasions like Red Dress Day is so important. “Red Dress Day means that we’re closer to finding justice and peace for these families affected,” says Michelle Chubb, a Swampy Cree artist and content creator located in Winnipeg. “It means a better future for my daughter so she doesn’t have to live in fear, like most of us.”

Red has become a symbol for MMIWG2S across Canada. It represents blood, earth and strength, but it also holds sacred symbolism. “It is said that red is the only colour spirits can see,” explains Vanessa Brousseau, an Inuk and Ojibwe artist, in a TikTok video. “The red dress represents a calling back to the spirits of these women; allowing them a chance to be among us and have their voices heard through family members and community.”

@indigenous_baddie National Day of Awareness for Missing & Murdered Indigenous Women & Girls. Please educate yourself & be aware of what Indigenous Women & Girls have to face everyday. I want to have a better future for Pîsim & acknowledging about this crisis is a step forward to finding justice & peace. #MMIWG #awareness #may5th ♬ Eyabay – Jingle Dress

Violence against Indigenous peoples remains urgent and under-discussed. “I encourage everyone to wear red, hang a red dress, and donate to organizations [working] directly with [victims’] families,” says Hunlin. But that’s just the beginning. “Read the report from National Inquiry into MMIWG2S+. Attend virtual discussions, vigils, walks and any space where families and advocates are taking the time to organize and educate.”

Learning about these issues, donating to organizations and supporting Indigenous artists, creators and small businesses are vital steps non-Indigenous Canadians can take towards reconciliation. “Education is violence prevention,” Hunlin concludes.

Below, find some resources and small businesses to support on Red Dress Day and beyond.

What Their Stories Tell Us: Research Findings From The Sisters In Spirit Initiative