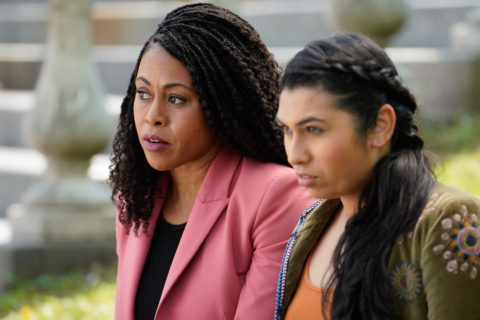 "These women were going to hospitals where they were expecting they would be cared for, have their child and take their child home."

In the November 3 episode of Diggstown, CBC’s ground-breaking legal drama, the show’s creators zero in on birth alerts, a controversial practice in which child welfare agencies notify hospitals and birth centres when an expectant mother is believed to be “high risk,” often resulting in the seizure of the baby without consent.

It’s a policy that has been widely condemned for its disproportionate impact on Indigenous and Black women. And while Diggstown is scripted TV, the show’s creator/showrunner Floyd Kane and episode director Juanita Peters want viewers — and Canadians — to know that this is not a fictional policy, nor is it something from the distant past.

Nova Scotia (where Diggstown is set) and Quebec still practice birth alerts, while British Columbia, Alberta and the Yukon ceased the policy in 2019. Manitoba and Ontario only stopped issuing birth alerts in 2020, although recent reports show the practice is still ongoing in Manitoba, primarily affecting Indigenous mothers. Prince Edward Island and Saskatchewan ended the practice in February of this year, followed by Newfoundland and Labrador in June and New Brunswick just this week.

Diggstown’s Amber Sekowan-Daniels, an Oji-Cree writer and filmmaker, pitched the idea for a storyline on birth alerts after hearing conversations about the policy in her home province of Manitoba, sparking a desire to shed light on the issue.

The show’s writing team dug into the history of birth alerts in Nova Scotia, and Floyd reached out to legal aid lawyers with clients impacted by the policy to help inform the writing.

“I am certain there are people in my family who have been impacted by this,” says Kane. “But it’s something that I didn’t understand was a formalized policy until we started getting into the episode.”

Titled “Ivy Maloney,” the episode begins with a poignant documentary-style video of Indigenous and Black actors who have experienced birth alerts in real life, reading from a script about the trauma inflicted by the problematic policy. The series’ lead character, lawyer Marci Diggs (Vinessa Antoine), represents those women in a class-action suit against the Nova Scotia government.

Peters recalls one of the actors, after reading her lines from the introductory monologue, telling her, “Oh my gosh, that’s my story,” which made the director recognize the power of the episode.

“When this practice happens, the women who this happens to are embarrassed, so they don’t talk about it with colleagues or with friends, because the system is set up to make you feel embarrassed,” she says. “So here finally was a moment in their life [where they felt], ‘We’re not wrong.’”

Including women from those communities impacted by birth alerts in the series was a deliberate choice, just as the very pointed dialogue aims to educate the viewer.

“When I read the script, I was really thinking about making sure that the audience wouldn’t forget these faces,” says Peters. “The really hurtful thing about traumatic events is that someone tells you their story and people say, ‘That’s a shame,’ and then they walk away, and their lives go on, and you’re still dealing with that pain and that issue.”

In addition to educating viewers about this problematic practice, Kane is hoping that the Diggstown episode has further real-world implications.

“Personally, I would just love to see the Nova Scotia government simply say, ‘We’re going to ban the policy,’ like the other provinces have across the country,” he says.

Diggstown also doesn’t shy away from providing some of the context behind the relationships between Indigenous people and these institutions. The episode is named after an Indigenous character, Ivy Maloney (Dana Solomon), whose baby has been removed from her. In the episode, a relative of Ivy’s (Sera-Lys McArthur) gives a devastating speech in her trial, drawing the line between birth alerts and past racist government policies.

“It was really important to make sure that we don’t talk about birth alerts as a separate thing,” says Kane. “We have to think about it as if it’s all a piece of one story. If the Sixties Scoop was bad, if residential schools were bad, then we have to acknowledge that the birth alerts policy is bad, and it needs to be abolished.”

While it could just be a well-done one-off episode of television, Kane feels that there are too many real world implications for it to exist solely as a piece of entertainment.

“When George Floyd died, I would have all these conversations with white colleagues, [who’d say] ‘I didn’t know that things were this bad,’ and you’re looking at this person like, how did you not know? Is it just that you didn’t want to know?” asks Kane. “Sometimes you have to lay it out in the simplest of terms, so that no one can look at the show and say, ‘I didn’t understand this was happening.’ These women were going to hospitals where they were expecting they would be cared for, have their child and take their child home, and [instead] the hospital calls the social worker that the child will be born, the child is taken from them, and then they have to go to court in 30 days to justify why they should have their child back. I don’t want people to leave this episode of Diggstown and not be able to say, ‘Well, I didn’t know.’ Because then that’s bullshit.”

The episode premieres tonight, November 3, at 9 p.m. ET on CBC.