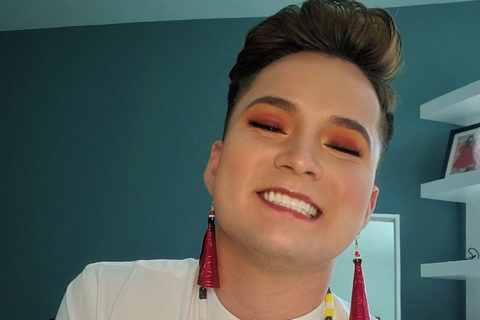 Indigenous Creators You Should Be Following on TikTok

From showing off Indigenous regalia to educating people on shared histories, these Indigenous content creators deserve an instant follow.

This week marks the second National Day for Truth and Reconciliation, a time to remember the continued damage that the residential schools did to Indigenous peoples in Canada — and to celebrate the richness of Indigenous culture in the face of seemingly insurmountable odds. Through fashion, music and comedy (among other things), Indigenous content creators have been educating people through their social media platforms — and we can’t get enough. To help you get started, here is a list of five creators who are amplifying Indigenous stories through their lived experiences and sharing it on TikTok.

@thatwarriorprincessGuess which part was more fun to play? 🐒 The receptionist? Or the Queen? 👑 ##nativeamerican ##culture ##indigenous ##inuit ##feminist♬ The Queen is Coming – Seth Sanker

Marika Sila is an Inuit actress from Yellowknife in the Northwest Territories, best known for her lead role as sergeant Yuka Mongoyak in The Twilight Zone. In her videos, you will find her displaying Indigenous regalia and encouraging people to support Indigenous brands and designers while admonishing culturally appropriated pieces like fringe leather jackets. She is also a hoop dancer, fire performer and yoga teacher, so you can expect to see some of her routines alongside her activism.

@indigenous_baddie##voiceeffects today is a different story, I am now embracing who I am ✨🦅♬ You Driving Me Crazy (Indian Girl) – Joey Stylez & Northern Cree

Featured on Teen Vogue, Michelle Chubb is a 24-year-old living in Winnipeg who has become a TikTok star through her videos — a mixture of her jingle dress dancing, comedy sketches and social justice activism. With over 570,000 followers, she aims to inspire younger generations and fill in the educational gaps left in Canadian curriculum when it comes to Indigenous history and culture. Her mooshum, or grandfather, was her biggest mentor, she tells Teen Vogue, though he passed away around the time she was in Grade 5, which left her devastated. “I didn’t go to pow wows for a while. It was too hard, him not being there. So I took a break, but I lost myself,” she says. In Chubb’s videos, she speaks from a place of vulnerability and empowerment, discussing Canada’s dark recent history of residential schools and all the beauty that exists in her culture.

@ohkairyn Kamloopa Pow Wow committee, what answer do you have for the countless gender diverse and sacred people youve excluded from your pow wow? This is not our way. Shame on you. #kamloopapowwow #powwow #twospirit ♬ original sound – Kairyn Potts

Kairyn Potts, a Two-Spirit Nakota Sioux from Treaty 6 territory and a member of the Native Youth Advisory Council in Ontario, took to TikTok during the COVID-19 pandemic and has now amassed over 230,000 followers. Through his videos, which feature a blend of fashion, makeup and comedy, he wants to address issues stemming from toxic masculinity. “I really want to show what I like to call ‘gentle masculinity,'” Potts told Global News in an interview. He was also part of TikTok’s #LivingStories Campaign, featuring Indigenous content creators sharing their histories and experiences.

Potts tries his best to make his platform a safe space for LGBTQ2 youth on his account, deleting hateful comments and making room for engagement. “My ultimate goal at the end of the day is to create some representation for people who look like me … and to show that there is space for us,” he says.

Larissa Munch, an 18-year-old Carrier and Nehiyaw from Nazko First Nation B.C., is another TikTok user aiming to inspire Indigenous youth through her content. As a jingle dress dancer, the teen content creator’s most popular videos (some with over 700,000 likes) are those of her dancing powwow — something she started doing from a young age.

Sherry McKay, who is from Sagkeeng First Nation and lives in Winnipeg, has over 510,000 followers and uses comedy as a way to educate people about her culture. “I don’t fit a perceived notion of what Indigenous people look like, and that’s fine because the amazing thing is that there’s so many different nations and tribes across the world and we all don’t look the same and that’s the beauty of it,” McKay says in one of her videos. “Welcome to Native Indigenous TikTok.”

Photography courtesy of Kairyn Potts
Get the best of FASHION in your inbox Thanks for signing up!
The latest fashion, beauty and celeb news delivered right to your email #FASHIONforall Now, check your inbox to complete your subscription
We won’t ever use your email address for anything else
Want even more FASHION? Follow us on social media.