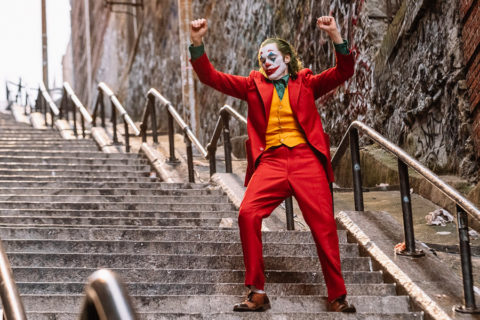 The first wave of titles for this year's festival has been announced—and it's major.

TIFF is always a heady, exciting time of year here in Toronto—the celeb sightings! the red carpet premieres! the parties!—and this year’s film lineup is more impressive than ever. Some of the most anticipated films of the year, including Joker, The Goldfinch and Knives Out will be screening at the festival, which will open with Daniel Roher’s Canadian documentary Once Were Brothers: Robbie Robertson and The Band. In a record number for the festival, 50% of the gala films announced thus far are directed or co-directed by women. While we don’t have the full 2019 picture yet, the first wave of titles—a total of 53 features constituting about a fifth of the festival’s whole program—was unveiled today. You might need to take a deep breath before we dive in.

The trailer for A Beautiful Day In The Neighbourhood dropped yesterday, leaving the internet in floods of tears, and now it’s been confirmed that the Mr. Rogers biopic starring Tom Hanks and directed by Marielle Heller (the filmmaker behind last year’s acclaimed Can You Ever Forgive Me?

Speaking of last year, Cynthia Erivo was at TIFF 2018 with Steve McQueen’s Widows and she’s back this year playing Harriet Tubman in Harriet, a biopic about the American abolitionist and activist, directed by Kasi Lemmons. Janelle Monae, Leslie Odom Jr. and Joe Alwyn also star.

Rian Johnson’s Knives Out had been getting loads of buzz long before the trailer for the whodunit black comedy even dropped, largely because of its all-star cast: Chris Evans, Daniel Craig, Jamie Lee Curtis, Christopher Plummer, Lakeith Stanfeld and Toni Collette.

Another star-powered film at TIFF is Hustlers, with Jennifer Lopez, Constance Wu, Keke Palmer, Lili Reinhart, Lizzo and Cardi B playing strip-club employees who scammed their wealthy clients out of hundreds of thousands of dollars. The film is based on a New York magazine article written by journalist Jessica Pressler, played by Julia Stiles in the film.

Taika Waititi’s satirical film Jojo Rabbit is an adaptation of Caging Skies, a novel about a Hitler Youth recruit who discovers his mother is hiding a Jewish girl in their home; it stars newcomer Roman Griffin Davis, Leave No Trace’s breakout star Thomasin McKenzie, Scarlett Johansson, and Waititi himself as an imaginary Hitler.

Armando Iannucci, creator of Veep, brought the dark comedy The Death Of Stalin to TIFF in 2017 and is now back with The Personal History Of David Copperfield starring Dev Patel, Tilda Swinton, Peter Capaldi, Hugh Laurie, Ben Whishaw and Gwendoline Christine.

Uncut Gems, the new project from New York’s Safdie brothers (whose last film Good Time starring Robert Pattinson was a critical hit), stars Adam Sandler—in a rare pivot to drama—as a jewellery store owner whose high-stakes bets lead him down a dangerous path. The film also stars Lakeith Stanfeld, Idina Menzel and singer/songwriter The Weeknd as himself, which is confusing but lets roll with it.

Destin Daniel Cretton, whose previous works include the acclaimed drama Short Term 12 starring Brie Larson and whose next project is the Marvel film Shang-Chi And The Legend Of The Ten Rings, is at TIFF this year with Just Mercy, a true story about an African-American man (played by Jamie Foxx) wrongfully convicted for murder. Michael B Jordan stars as the lawyer who got him acquitted, and Larson stars in the film as well.

Todd Phillips’s Joker snags the title of the first superhero movie to screen at TIFF. It stars Joaquin Phoenix in the titular role along with Zazie Beetz, Marc Maron and Robert De Niro. “We went in not knowing exactly what to expect, but it is a really original vision of this character,” TIFF’s artistic director Cameron Bailey told the Los Angeles Times. “It’s not based on existing DC canonical work and so that allows Todd Phillips to go in a new direction. And Joaquin Phoenix is just phenomenal in it.”

“[A]s a festival, we have often launched films that are going to go on to big commercial lives,” said Bailey. “And I think this year you would also maybe include Ford v Ferrari in that and Hustlers and some other films that are going to be presented to the widest possible audience. But they also are films of high artistic merit. And that’s why they’re here.”

The full lineup for TIFF 2019—which runs from 5 to 15 September—will be revealed on August 20 but the slate announced thus far can be found here.

Image courtesy of TIFF
Get the best of FASHION in your inbox Thanks for signing up!
The latest fashion, beauty and celeb news delivered right to your email #FASHIONforall Now, check your inbox to complete your subscription
We won’t ever use your email address for anything else
Want even more FASHION? Follow us on social media.