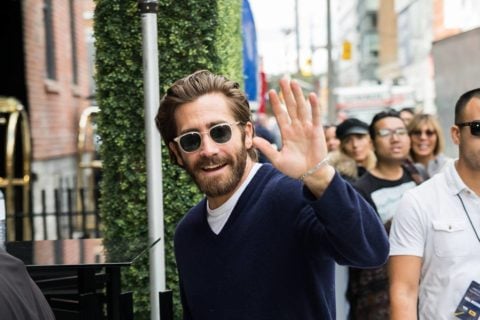 TIFF 2018 is almost here — and the city is buzzing with excitement to  stalk A-list actors. From Bradley Cooper to Timothée Chalamet to Ryan Gosling, Toronto is set to be filled with very good looking famous faces from September 6 through 16. Here’s a definitive round-up of the city’s celeb-favourite hotels, restaurants and bars, and who you can expect to ‘run into’ while you’re there.

When this uber luxe hotel opened its doors in the heart of Toronto’s entertainment district last year (conveniently across the street from TIFF headquarters at the TIFF Bell Lightbox), it was expected that the space would be brimming with A-list Hollywood talent. And the Bisha delivered. Between the lobby’s luxe velvet walls, the euro chic Mister C lobby lounge and the gorgeous 43rd floor event space, celebs couldn’t help but flock to this sleek Toronto destination.

Star spotting is always on high alert at this resto-hot spot co-owned by Canadian director Ivan Reitman. You can bet his group of A-list pals will be noshing and sipping at this Adelaide St. W staple. Last year, Montecito played host to the Hugo Boss after party for I, Tonya, which was attended and covered by FASHION Features Editor Greg Hudson. “The little grilled cheese sandwiches were pretty great,” he wrote in his review of the event, “especially with ketchup for dipping: so comforting!”

Each year, The Windsor Arms hotel plays host to some of the festivals biggest parties. On September 8th, Susan Sarandon and Ben Stiller will host the 10th Annual Artists for Peace and Justice Gala alongside Toronto PR powerhouse Natasha Koifman. The Old Hollywood-esque space also typically houses the most exclusive ticket of the festival, the annual InStyle and Hollywood Foreign Press Association party.

Each year, stars try to score a resso at this award-winning Eastern Mediterranean restaurant. Above the dining space, the RBC House pops up at 11 Duncan to serve as one of the festival’s top destinations for film junkets, concerts, premiere parties, celebrity sightings and speaker series. It’s the perfect spot to munch on some shakshouka and lamb ribs, then stake out the red carpet party arrivals.

This one is a given. Grey Goose is returning to the Soho House with its annual lineup of A-list film premiere events featuring A+ cocktails. In past years, the private members’ club has hosted exclusive soirees celebrating films such as Molly’s Game, Stronger, Killing of a Sacred Deer and Woman Walks Ahead. Tip: don’t bother trying to get in if you aren’t on the list, the bouncers at the door have a strict invite-only policy.

There’s a reason why this name appears on every yearly TIFF-spotting list. The proximity to all things festival-related makes this a celeb fave for crashing post-parties and premiers. Get past the slew of black Escalades at the main entrance and if you can nab a seat, park yourself for a while to see the likes of Ryan Gosling strolling through the lobby and onto the patio.

Stars spotted in the past include: The hotel’s PR is keeping this list under wraps — which only makes it feel that much for elite. “While we cannot reveal exactly who is staying there,” they said, “if you book a room, you are sure to see some of your favourite stars!”

Is there anything better than a party on rooftop with a pool and view of the CN Tower? Over the past two years, Lavelle has made a name for itself as a celeb-spotting playground thanks to its 16,000-square-foot rooftop lounge with four bars—and an ice cream parlour.

Once again, AT&T is taking over David Chang’s famed Momofuku inside the Shangri-La Hotel. Named the DIRECTV House, the space will host daily lunches, premiere parties, cast dinners and the Variety Studio, a long-standing portrait and video studio for A-list actors.

At last year’s festival, this Vegas-esque Yorkville steakhouse hosted a number of TIFF events, including the premiere after-party for Luca Guadagnino’s coming-of-age romance, Call Me By Your Name. Maybe Timothée Chalamet will be back for this year for another Striploin or Dry-Aged Porterhouse?

Stars spotted in the past include: Armie Hammer, Timothée Chalamet, Charlie Hunnam.