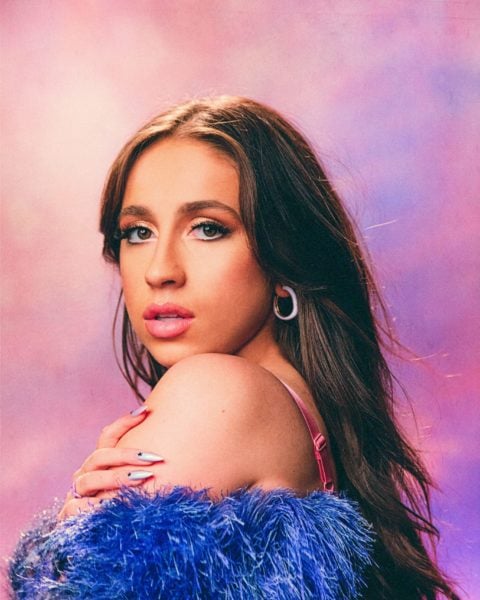 Ahead of the release of her debut album, the Canadian pop star talks self-love, growing up as a dancer and eccentric style.

Most teenagers don’t let their mom pick out their clothes. But Tate McRae is not your average 18-year-old, she’s a pop star who hates to shop, hence her mom-turned-stylist.

“She is so involved in fashion, always watching the runway shows and keeping up with trends,” McRae says. “She’ll get all the outfits and then I’ll put them together myself. I have no idea why I’m blessed to have a mom with really good taste.”

The Calgary-born performer favours matching sets, metallics and monochrome, a playful extension of the on-stage presence she’s cultivated for the past five years. In 2016, at age 13, she placed third on So You Think You Can Dance. (McRae was the American reality show’s first-ever Canadian finalist.)

She built a music fanbase by posting original songs to her YouTube channel before releasing three singles in 2019. At the start of 2020, she released the five-track EP All the Things I Never Said (at just 16, for those not keeping track), a moody alt-pop record that propelled McRae to international fame.

Coming into your own as a person and performer in the public eye comes with challenges, but McRae doesn’t seem fazed. She’s learned to harness the power of self-expression in her music and style. “It wasn’t until I got to grade 12 and then graduated that I was able to explore being riskier in fashion and finding myself again,” she says. “Because for the longest time I felt so judged by the people around me.”

Ahead of her debut album coming this spring, FASHION caught up with Tate McRae (now on tour) about channeling her rock star style, growing up as a dancer and being a tomboy with edge.

Do you feel like being in the spotlight has affected the way you view self-expression through fashion?

Totally. When I was in high school, everyone thought I was so weird for having a YouTube channel, posting original songs and travelling a lot. I was wearing all these crazy clothes and everyone would make fun of me. So I went through a stage in grade 10 where I was like, ‘I want to be so normal.’ And that year was like, the worst year of my life because I didn’t feel like myself at all.

How would you describe your personal style now?

I’m a bit of a tomboy. I’ll wear baggy stuff until the day I die. I like to be edgy, but as I’m getting older, there’s a feminine touch to my style. I think there always needs to be some part of my outfit that is weird. I’ll always add some sort of statement piece, whether it’s super high platform shoes or a crazy necklace.

This past year when performing at festivals and shows, I would think, ‘I want to feel like a rockstar if I’m going to be in front of all these people.’ And then it started translating to everyday life. I think when you push the boundaries fashion-wise, then you can push the boundaries personality-wise, and it makes you feel like you’re playing a character every time you go out.

I really liked my look at the Billboard Women in Music Awards. We had this red Prada outfit; a bandeau and a skirt. Instead of wearing just that, we decided to make a full mesh catsuit and put it underneath, and then added these huge chunky platforms. I thought that was a really cool way to take an outfit and make it my own.

My mom was styling me this whole summer, which has been the best thing ever….She always says, ‘I don’t feel like you’re my daughter,’ because I hate shopping — I despise it. But I like putting outfits together.

How has your experience as a dancer influenced your relationship with fashion and beauty?

It’s really difficult because I would see myself every single day since the age of seven in a high-cut leotard and tights. So you’d be staring at yourself in a mirror for eight hours a day, judging your body. Sometimes I feel delusional because I’m like, “I have no idea what my body looks like.”

I used to go to ballet schools in Germany and they would take measurements of every single part of my body at age nine. At the time, I didn’t even realize how much that was messing with me mentally, but I was already thinking about my body image. No one should be thinking about their body in that kind of way at a young age.

Even though I’m starting to convince myself to love myself, there are a lot of things that dance has brought me that make navigating fashion so much harder. Because when you feel like you don’t know what you look like, it can be hard to take risks.

You have a huge following on social media, especially TikTok. Has that impacted your self-love journey?

As a public figure, it’s hard because you’re putting yourself out there for people to judge you. I’m growing up and my body’s changing every single day. And while I’m just trying to accept my own body, so are millions of other people on the internet.

The other day I found a TikTok of someone mocking a song that I wrote when I was 13. I was just a little girl, writing a song and saying, “Here’s what I love to do.” I don’t think anything should be embarrassing. Singing and dancing and doing things that you enjoy aren’t embarrassing things. That’s just cool. I think it’s cool when people can put themselves out there.

Photography courtesy of Sony Music
Get the best of FASHION in your inbox Thanks for signing up!
The latest fashion, beauty and celeb news delivered right to your email #FASHIONforall Now, check your inbox to complete your subscription
We won’t ever use your email address for anything else
Want even more FASHION? Follow us on social media.