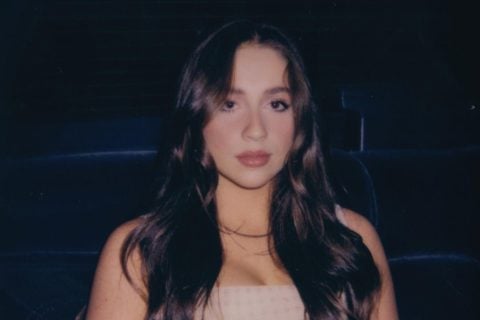 She may be killing it with the Gen Z crowd on TikTok, but McRae's mature songs about love, heartbreak and relationships defy her age. Here, Apple Music's Up Next artist this month explains how age doesn't mean a thing when it comes to making art.

Tate McRae isn’t new to the spotlight. At just 12 years old, the Calgary native was a finalist on the TV dance competition, So You Think You Can Dance. A music aficionado, McRae took her singing talent to YouTube shortly after that, sharing original songs and covers that quickly gained popularity on the platform. Four years later, she appeared on The Tonight Show Starring Jimmy Fallon last month singing her track “You Broke Me First,” the video for which McRae filmed with her iPhone taped to the front of her car during the pandemic.

A self-proclaimed old soul, McRae’s mature songs about love, heartbreak and relationships defy her age. She’s adamant that just because she’s young doesn’t mean she has nothing important to say. She keeps up with her Gen Z counterparts by constantly releasing videos for her 5 million and counting followers across her YouTube channel and TikTok account, and maintains her cool-girl status by sporting a freshly dyed money piece (no side part here). Now, she can count herself as part of a roster of talented creatives like Billie Eilish, Daniel Caesar, Megan Thee Stallion and Jessie Reyez as Apple Music’s Up Next artist this month.

“I’m not as cool as you think I am,” McRae tells me with a sincere laugh when we meet over Zoom, looking away from her screen as if to hide from that very awkward feeling of someone calling complimenting you. Here, the “All the Things I Never Said” singer talks where she finds her inspiration during the pandemic, dealing with loneliness and how age means nothing when it comes to making music.

You filmed the video for your hit “You Broke Me First” on your iPhone. What was that like?

It’s perfect; it was our most low-budget video. Like, five bucks? It was all in the rush of the moment. We had [just returned] home after the pandemic broke. Me and my friend went up to a rooftop [and we] taped [my phone] to the front of my car. We were up there for maybe 10 minutes. I just started walking, playing the song out of the car windows, while they were driving backwards. It ended up looking way cooler than we thought.

It’s super real. You can literally see me reacting to my song on my face.

You performed on Jimmy Fallon recently. That must’ve been a career highlight for you so far.

I love him. When he and his team reached out, I freaked out. And it was also super cool because I got to perform with my favourite people, Tristan and Finley, my best friends since I was really young in the dance world.

It sounds like a full-circle moment for you and your friends. Does it even feel like work for you?

Me and my dance friends have been doing some cool stuff during the pandemic, and we’ve been able to reunite after three years. It’s fun — I call it work, but it’s not at all. If I wasn’t working right now, I’d probably be doing the same thing.

Do you ever get stage fright at all?

The interesting thing is I don’t get nervous for big things. I don’t know why this happens, but I will get like, puke-nervous when I’m going to do a presentation at school or go fill up my gas, but if I’m about to go on Jimmy Fallon, I am stress-free. It’s very weird. My parents always make fun of me. I’ll be a wreck for the simplest things in life, and just not affected by cool things.

What’s it been like working and making art during COVID-19?

It’s definitely been interesting. I’m not a fan of Zoom sessions, but have to do them every day. You have to adapt because you can’t hear anyone, ever. It’s always glitchy, always in and out. You just have to go with it, because it’s a hard process. I’ve been stripping back my writing team — it’s easier than having a million different people on a call.

Have you had to look in different places for writing inspiration, given all the isolation this year?

Usually I’ll be with my friends and I’ll observe everything, and grab emotions from that to write my songs. But now I can’t see any of my friends, and I have nothing to grab from. I’ve been trying to push where I get inspiration from — photos, quotes, things I see online. And that feeling of literally just being in your house and analyzing every part of yourself. That’s what I write about.

Alone with yourself and your thoughts can be a hard place to be sometimes.

There are definitely new emotions that I didn’t have before being trapped in [my] house. There’s a lot of inspiration that has been taken away. Without interaction, I feel like [I] have no idea what to write sometimes. It’s the worst feeling ever.

You write about a lot of serious stuff that some people might say you’re too young to know about.

That’s probably one of my least favourite things that someone can do, judge me based on my age. A 17-year-old and 30-year-old both have their own lives. No matter how much time has passed, it doesn’t mean you don’t have the same relevance. I feel like I’m an old soul; people always tell me I’m a 50-year-old trapped inside [my body]. Everyone’s brains work different. I’m super observant. I’ve written songs that I feel like people [older than me] relate to. That says a lot about what I have to say. You can’t put an age on a writer or an artist.

What’s it been like having to balance your friendships and career, especially during a pandemic?

I thought I was getting a grip on it. I have great friends and I’m seeing people I work with, and then the pandemic broke and I was like, ‘I am so lonely.’ I have a close group of girlfriends who I saw at the beginning of the summer, and now not at all. I’m a pretty social person, and my energy is affected a lot by that.

You’re going on tour soon, if all goes according to plan. Is there anyone you’d love to collaborate with?

I always say The Weeknd and Post Malone are two huge dream collaborations. Ariana Grande would be cool.

How does it feel to be Apple Music’s Up Next artist this month, following in the footsteps of so many incredible artists?

It’s one of the coolest things I’ve done. I’m really stoked about working with Apple. I mean, it’s Apple. It’s an honour, and it’s cool to be able to just push my creativity and make more content. They also have the resources to be able to create some cool documentaries and videos.

You’re on TikTok all the time. Are there any trends you’re loving right now?

I love the dance challenges and those crazy makeup looks where [people] recreate their entire faces.

Photography via Tate McRae
Get the best of FASHION in your inbox Thanks for signing up!
The latest fashion, beauty and celeb news delivered right to your email #FASHIONforall Now, check your inbox to complete your subscription
We won’t ever use your email address for anything else
Want even more FASHION? Follow us on social media.