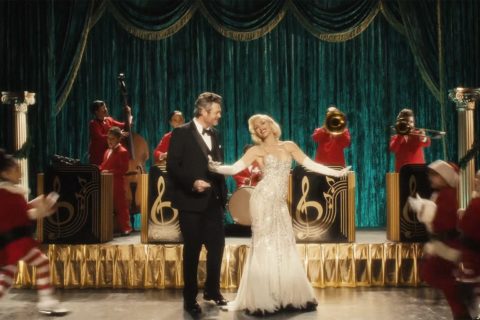 9 New Christmas Songs to Add to Your Holiday Party Playlist

The season for holiday gatherings has begun. Maybe you’re hosting something at your home, or maybe you’re that person who insists on taking over the aux cord everywhere you go. Either way, it’s important to have a playlist prepared. With Gwen Stefani, John Legend and RuPaul all hopping on the Christmas album gravy train in 2018, there’s plenty of new jams to turn on as the turkey’s cooking. Play Mariah Carey’s “All I Want for Christmas” between each of the brand new songs listed below, and you’ve got yourself the perfect holiday party playlist.

For when your guests first arrive. You’re setting the mood with something familiar, without looking like you’re trying too hard.

(Mostly guitars, a few vocals. And a great animated video.)

“What Christmas Means to Me” by John Legend ft. Stevie Wonder

(I assumed this new track was off John Legend’s fifth Christmas album or something. Apparently, his recently released A Legendary Christmas is his first one.)

“Rockin Around the Christmas Tree” by Pentatonix

(You can always count of these guys. Read our interview with the a cappella group, where we touch on their favourite Christmas gifts and who they’d like to meet under the mistletoe.)

For when you’re sitting down to stuff your face. Low and slow is the way to go when guests are making small talk between mouthfuls of food.

“Come Out and Play” by Billie Eilish

(A Christmas song from the guy who sang your favourite tracks on the Call My By Your Name soundtrack.)

“Have Yourself a Merry Little Christmas” by Ingrid Michaelson

(She also does a version of Mariah Carey’s “All I Want for Christmas” that will make you want to cry. I didn’t know that was possible!)

The Turn Up Tunes

To cure your food coma, brew a pot of coffee and grab a bottle of Bailey’s — it’s time to party.

“I Am The Grinch” by Tyler the Creator ft. Fletcher Jones

“You Make it Feel Like Christmas” by Gwen Stefani ft. Blake Sheldon

(Much like the unlikely coupling of Stefani and Sheldon, this is a high-energy holiday pop song is something you never knew you needed.)

(This is just one song from RuPaul’s Christmas album. So you could also just scrap this list and download that.)