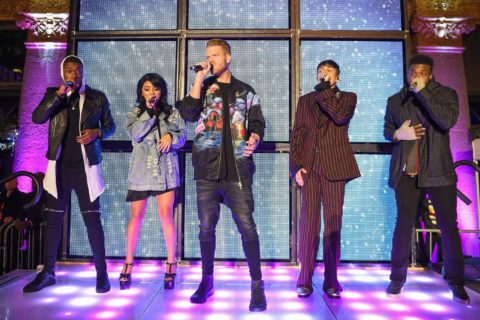 Pentatonix Talks Holiday Songs, Christmas Presents and Who They Want to Meet Under the Mistletoe

Goodbye candy corn, horror movies and OTT celebrity costumes, and hello lavish department store window displays and a capella singing groups. Because now that Halloween is finally over, MERRY CHRISTMAS EVERYBODY! (And to all those who think that November 1 is too early to start playing Pentatonix holiday album on loop: I hope your stocking is stuffed with coal.)

Last Thursday, Hudson’s Bay and Saks Fifth Avenue kicked off the Christmas season with the unveiling of their iconic holiday windows. After dropping the curtains on the festive displays, three-time Grammy® Award-winning and multi-platinum-selling artist Pentatonix took to the stage to perform three of their dramatic medleys.

Before their big performance, I caught up with Pentatonix members Scott Hoying, Mitch Grassi, Kirstin Maldonado and Kevin Olusola, to talk all things Christmas. And to ask: How did Pentatonix achieve Michael Buble / Mariah Carey status in the world of holiday hits?

“I think a capella and Christmas music just go really well together,” Kirstin said in response. “We’re just a joyous band and our music is just fun, happy and nostalgic.” She’s right. There’s something about the group’s intense harmonies that transcends religion, even when they’re singing about stories from the Bible.

“It makes you feel something no matter what you believe,” Scott added, “and I think that’s why it’s reached such a mass amount of people.”

Here’s everything Pentatonix loves most about the holidays:

Scott: ‘Mary Did you Know.’

Mitch: ‘Carol of the Bells.’

Kirstin: Honestly the most excited I’ve ever been for Christmas is when I get a big fluffy blanket. I turn up for blankets. I specifically remember this pink blanket.

Mitch: I got an electric keyboard that I was very excited about. I still have it.

Scott: Elf maybe? Is Frozen a Christmas movie? I love Frozen, it’s one of my favourite Disney movies of all time. I know everyone loves it, but I truly love it. It’s so good.

Mitch: Santa Clause is a staple. (The one with Tim Allen.)

What are you asking Santa for this year?

Kevin: Furniture. Because I moved into this new place and I’ve lived in for about a year, and I still don’t have any furniture.

Mitch: All I ever want is clothes. So clothes.

Kirstin: Yeah, I was going to say clothes or jackets.

Mitch: There’s a trench by Vetements that’s padded and layered and I’m dying for it.

Scott: See I feel like you already have everything that you could ever want clothing-wise.

Mitch: I don’t though!

Scott: I know you better than anyone and I still would not buy you clothes because I’m afraid I would get the wrong thing. Cause you’re so specific about what you like.

Scott: No, make me a mood board with links.

Who would you want to meet under the mistletoe?

Scott: I’ve been having a Chris Hemsworth moment lately.

Scott: That’s such an anyone answer, I can’t believe you just said that.

Who’s your top pick for a Christmas special collab?

Scott: That would be sooooo cool.

Mitch: Gaga would be very cool. I don’t think she does [a lot of Christmas stuff], but I feel like she’s good at timeless type performances.

When is it too early too start singing Christmas music?

Kevin: We always release our stuff before Halloween. I feel like Halloween needs to be finished and then…

Scott: November 1st I think is the day.

Kirstin: November 1st. I love Halloween — I’m a die hard. So I won’t accept Christmas music until after Halloween. Even though our album came out October 20th…