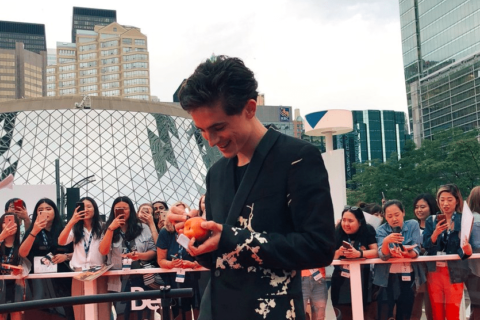 Who Won Day 2 of TIFF 2018? A Timothée Chalamet-Signed Peach

When I first saw a photograph of Timothée Chalamet at TIFF, I’ll admit I was a little concerned. Who is this v-necked Renaissance man with a bowl cut? What happened to the Greek god with enviable style and a luscious head of hair? If you follow multiple Chalamet fan accounts on Instagram, you already know what I’m talking about — and you know that I was not alone in my less-than-pleased reaction.

But when the 22-year-old stepped onto the red carpet for the world premiere of Beautiful Boy, nobody was doubting his hearthrob status. His curly mop was gelled into a perfectly tousled, Robert Pattinson-esque style, and he wore a sleek black and white embroidered Haider Ackermann suit. The crowd of screaming girls—me included—was utterly smitten.

Timothée on the Beautiful Boy red carpet at TIFF. The suit ??. @h.a has done it again! (Via TimotheeUpdates) #timotheechalamet

So much so, that I could barely hear myself think over the high-pitched “TIMMY” screams as I waited for Chalamet on the press carpet. The Oscar-nominee schmoozed the crowd for nearly 30 minutes, posing for selfies with fans and signing a peach. (The latter, of course, in reference to his infamous Call Me By Your Name scene.) He didn’t seem to hate the attention.

When he finally began to make his way over to the row of journalists waiting to ask him about the film, I overheard a publicist whisper-shout into her headset: “Tell me he did not go back out there!” What can I say? Timmy knows where his people are. He skipped the press carpet, spent time with his fans—some of whom spent six hours waiting for him—and went straight into Roy Thompson Hall, where he blew audiences away with his heartbreaking performance in Beautiful Boy. And, after all that, he ended up here.