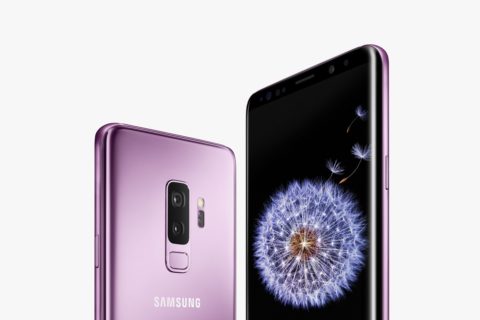 Samsung fans rejoice: you’ve got a brand new gadget to fall in love with. Introducing the 5.8-inch Galaxy S9 and 6.2-inch Galaxy S9+, which the tech giant unveiled last month at Mobile World Conference in Barcelona and is preparing to launch in Canada next week.

On first glance, the new additions to the Galaxy family don’t appear to be different from their predecessors, the Galaxy S8 and S8+. They’re still packed with stereo capabilities, facial recognition technology and fingerprint sensors, and the sleek edge-to-edge infinity display is still there.

Instead, Samsung’s latest release is all about the lens. Even before the official introduction, the tech giant made this clear with it’s not-so-subtly titled “The Camera. Reimagined.” But it makes total sense. Most of us rely on our smartphone to capture our selfies, #ootds and #traveltuesdays, so a blurry, badly lit pic is just not going to induce FOMO the way we intended.

Though Apple’s iPhone has always made a solid effort to help us take beautiful crisp photos,  the S9 and S9+ camera is able to adjust almost instantaneously with its Dual Aperture (F1.5 – F2.4) allowing it to let in more light when it’s dark and less light when it’s too bright. The result:  your selfie game is on point even in less-than-ideal settings. Blurry pics, be gone.

Samsung is also making it easier than ever to shoot and create slow-mo videos of your fave runway and street style moments by building the function into its camera. Though the iPhone already has this function for as long as I can remember, the S9 and S9+  raise the bar with automatic Motion Detection, capturing big movements in the frame (like a model walking down the stage in a fringe dress) and captures the motion you’ve set up. Heads up: it takes some getting use to as you have to make sure the subject passes through the yellow frame, so definitely practice ahead of time. And unlike the iPhone which has slow-mo sound effects, on the S9 you can choose from a selection of 35 various background music (or select your fave song from your playlist), loop it or reverse it to make unique, shareable GIFs.

But that’s just the camera. Ahead, the breakdown of the the S9 and S9+’s best features.

This one’s for you. Bixby (a.k.a Samsung’s virtual assistant) got a bit of an upgrade since the S8 and is making online makeup shopping easier with its AR technology and beauty brand partners like Sephora, Covergirl and AmorePacific. Cue the angel music. Collaborating with augmented reality beauty app ModiFace, you can now “test” it by applying the virtual makeup to your face, and instantly see if that M.A.C foundation works with your skin tone or that Bobbi Brown eyeliner looks good on you before you go and buy it, thanks to a library of shades offered by some of the world’s biggest cosmetic brands. With ModiFace having worked with Estée Lauder, Smashbox and Beautycounter, we expect more and more brands will be getting on the bandwagon very soon.

Up your selfie game

Speaking of beauty, the Galaxy S9’s new built-in filters are a selfie taker’s dream come true. While you’re taking a photo of yourself with the front camera, a filter will be already in play so you’ll always look your best without needing to do any retouches. It’s a great confidence booster, because your skin just looks flawless. All. The. Time. My personal fave? The “fresh” one, which gives your face a nice warm glow.

There’s no denying emojis are a fun way to express ourselves when words are just not enough. While Apple recently animated 2,500+ emojis, Samsung took everyone’s fave feature and tweaked it to make personalized emojis. Say what? Similar to Bitmoji, users can now create an emoji that looks, sounds and acts just like you. Well, sort of. Although mine doesn’t look quite like me, it’s the thought that counts.

Thanks to Bixby’s real-time object detection and recognition, users can now translate foreign languages and currency in real time with Live Translation. This means you can basically face your camera to a French-only menu, have it translated in seconds and actually order what you want without actually opening up the Google Translate app. Genius.

Infinity screens aside, catching up on movies and streaming our fave artist’s albums on-the-go with the S9 and S9+ just got a little more epic. The tech giant tapped AKG to offer dual stereo speakers in the new devices (one speaker at the top and one speaker at the bottom), which means surround sound.

Buh-bye, basic black. You can opt to get your phone in Titanium Grey or Lilac (a nod to the Pantone Colour of the Year).

And how much is it?

Unlike the rumours swirling around saying it’s going to be the most expensive smartphone yet, it won’t be as expensive as the iPhone X, which debuted its latest at $1,319. Though it’s still going to set you back $960 for the Galaxy S9 (and $1,100 for the S9+), it’s worth investing for amateur mobile photographers who want a phone that can perform in any setting. And like its competitor, the tech giant is also offering those looking to upgrade from their S7 and S8 for a trade in and trade up situation. You can trade in your old Samsung smartphones and get a minimum of $100 off in addition to the trade in value when you purchase the Galaxy S9 or S9+ starting now through April 9, 2018. So if you’re looking to change things up, this might be the perfect time

While the phone won’t be available for Canadians to purchase until Friday, March 16, you can pre-order today.

The Samsung Galaxy S9 & S9+
Get the best of FASHION in your inbox Thanks for signing up!
The latest fashion, beauty and celeb news delivered right to your email #FASHIONforall Now, check your inbox to complete your subscription
We won’t ever use your email address for anything else
Want even more FASHION? Follow us on social media.