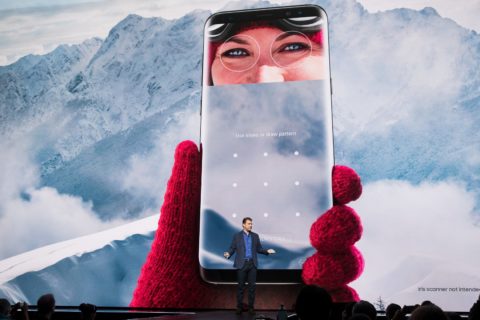 Between the Galaxy Note 7 battery debacle and the bribery scandal, Samsung had a rough year in 2016. But it looks like the tech giant is turning things around with its latest news.

After months of speculation, Samsung announced its latest innovation in New York. World, let us introduce to you the Samsung Galaxy S8.

The all-new #GalaxyS8 takes you beyond the limits of any phone you've known before. #UnboxYourPhone https://t.co/pHVmdc8ZNj pic.twitter.com/hyzX4xBAf3

“The Samsung Galaxy S8 ushers in a new era of smartphone design and fantastic new services, opening up new ways to experience the world,” said DJ Koh, President of Mobile Communications Business of Samsung Electronics, in a press release. “The Galaxy S8 is our testament to regaining your trust by redefining what’s possible in safety and marks a new milestone in Samsung’s smartphone legacy.”

While its competitor Apple has yet to release any news about its rumoured anniversary phone, Samsung is setting the bar high with its latest launch. From the infinity display to unlocking your phone with a scan of your iris to a selfie-ready camera, the specs on this are like nothing we’ve seen before.

Scroll down to find out everything you need to know about Samsung S8, including when you can can start pre-ordering.

By reorganizing the phone’s interior (including embedding the home button under the screen), the phone features an infinity display (read: a much larger screen). It not only allows for optimal viewing pleasures but also helps users multitask.

…and in two colours

You can opt to get your phone in Midnight Black or Orchid Grey.

Samsung users, meet Bixby. Similar to Apple’s Siri, Bixby is your guy to help you get things done. He is also intuitive, learning your routine and personalizing your content. But that’s not the coolest part. You’ll also be able to shop, search for images and get details about nearby places with its image-recognition technology.

Touch ID is so yesterday

Samsung is now upping its security function by allowing users to unlock their phones via iris scanning. Talk about spy goals.

This phone will find and autofocus your friends’ faces (so no face is left blurred out), and the rear camera will help you take better pictures, no matter how low-lit the venue or restaurant is. Insta-ready pictures every time.

For PC users, this one’s for you. You can now transform your smartphone into a desktop, thanks to Samsung DeX. This unique feature basically creates a desktop-like experience where you can edit and work straight from your phone.

While the phone won’t be available for Canadians to purchase until Friday, April 21, you can pre-order today. There’s also a perk for those who pre-order: From March 29 to April 20, 2017, you will receive the new Samsung Gear VR with Controller with your purchase of an S8/S8+ phone.