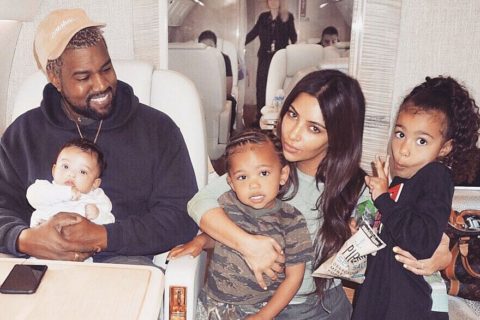 The royal baby is nearly here, and bookies are busy betting on the name the Duke and Duchess of Sussex will choose. (Right now, Spencer is a popular guess, per Princess Diana’s maiden name. They’re also putting money down on the weight, height, birth time and hair colour.)

There is, however, another kingdom heir on the way—one that amidst the Jordyn/Tristan/Khloe drama, seems to have been entirely forgotten. Back in January, during an appearance on Watch What Happens Live with Andy Cohen with her sisters Khloe and Kourtney, Kim Kardashian West confirmed that she and Kanye wer expecting their fourth child, telling Cohen, “It’s a boy. It’s out there. I got drunk at our Christmas Eve party, and I told some people.”

It's a boy! @KimKardashian confirms she and @kanyewest are having another baby! https://t.co/JbNbyTRyB7 #WWHL

Congrats guys, we’re both thrilled and terrified that your empire will soon grow by one. Now, as the birth date nears, we need to have a conversation about what really matters: the baby name.

I spent a fair amount of time during my early childhood development flipping through trashy tabloid magazines as my parents scoured the aisles of the grocery store. It was here, seated on the cold floor between the facial tissues and cat food, that I discovered my love for celebrity scions. And, in particular, their unique names. (It’s a pretty personal passion. I’ve always known at least a dozen people also named Meghan. I can’t say I’d rather be called Apple, but I wouldn’t have minded something along the lines of Suri or Shiloh. The rise in ranks of a certain duchess, however, has changed my mind about the star power of my name — as did the realization that I share the same first, middle and last name with a quite famous British reality TV star.)

And so, as a noted expert in the study of celebrity baby names (from strange to royal to reality), I have a few suggestions for the Kardashian Wests. Here are the perimeters set for me: during an appearance on Ellen, Kim Kardashian shared that she has an affinity for one syllable names. Her first two children, North and Saint, fit the bill—and Kardashian admitted that it “kind of messes with” her that with Chicago, her third baby, there isn’t a common thread connecting her offsprings’ names.

With this in mind, here’s what I came up with:

Cal
Short for Calabasas, the city the Kardashians have long lived in. If Kanye got Chicago, Kris Jenner deserves this.

Wylde
Like Wild West, but a touch more creative.

Don
The couple almost named their second daughter Donda, in honour Kanye’s late mother. Drop the “da,” and you’re left with a one syllable name perfect for a suave baby boy.

Free
As in “free thinker.” I know Kanye is a big fan.

Gogh
Like Dash, this name suggests speed. But I opted to spell it like Vincent van Gogh, because Kanye likes art. Which brings me to…

Ten
This will be the tenth Kardashian grandchild. And also, we know that Kim Kardashian is a fan of Millie Bobby Brown’s Stranger Thing‘s character, Eleven.

MJ
It’s not one syllable, but it’s the name of Kim’s grandmother.

Wood
Re: above. Alternative spelling: Would. As in, Would West?