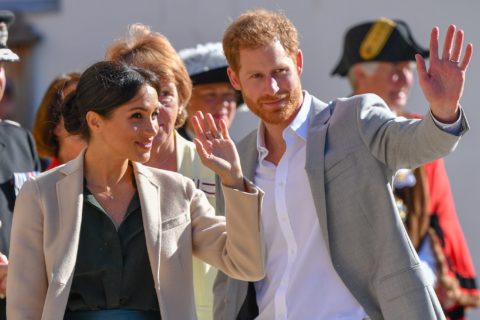 Everything We Know About Meghan Markle & Prince Harry’s Royal Baby

On the morning of October 15, Kensington Palace dropped some major news: Meghan Markle is pregnant. It was a big announcement, and it left us asking a lot of unanswered questions. Will the Royal Baby share a birthday with its royal cousin? Will the Royal Baby be a Prince or a Princess? A Lady or a Lord? And perhaps most importantly: can the Royal Baby be both the reigning monarch and President of the United States?

It’ll likely be a while before the palace issues another official statement, so the guessing game begins now. While we patiently wait, here’s everything we know (and everything we think we know) about the Royal Baby, from the expected title to a mock-image of what he or she might look like.

When will the Royal Baby be born?

Here is the one bit of information we do have: “Their Royal Highnesses The Duke and Duchess of Sussex are very pleased to announce that The Duchess of Sussex is expecting a baby in the Spring of 2019,” the palace said in its initial statement. Then, during a January 14 visit to Birkenhead, the Duchess of Sussex shared with members of the crowd that she’s due to give birth at the end of April or early May.

Meghan has told wellwishers in Birkenhead that she is six months pregnant – due end of April/beginning of May! Lots of baby chat today! #dukeandduchessofsussex

As the most detail-oriented royal fans have already noted, Prince William and Duchess Kate’s 3-year-old daughter, Princess Charlotte, was born on May 2. So yes, we’re already hoping for a joint cousin birthday celebration on Buckingham Palace grounds. There better be a jumpy castle.

Will the Royal Baby be a boy or girl?

We don’t yet know the gender of the baby—It’s only possible to know a baby’s sex at around 16-20 weeks, and according to our calculations, Markle should be hitting 16 weeks about now. What we do know is that Prince Harry is hoping it will be a girl. According to Express, a crowd member wished the couple well on their news, shouting to Prince Harry: “Congratulations, I hope it’s a girl!” The Duke replied: “So do I!”

Speculation is all the rage, and the bookies are already placing bets. According to Ladbrokes, current odds are 10/11 that Harry and Meghan’s baby will be a boy, and evens that it will be a girl. I have no idea what they means, but I’m guessing there’s a 50/50 shot.

What will they name the Royal Baby?

Yes, we’re only a week post-pregnancy announcement and already bookies have set odds on what Meghan Markle and Prince Harry’s first child will be named. Katie Baylis, spokesperson for betting website Betfair, spoke to Express about the odds, saying, “At this stage Diana, Arthur and Alice, which was favourite at different stages for Kate and William’s babies, are the 12/1 front runners. However, with months until the baby is born, those odds will shorten, change and other names will come to the forefront, so watch this space.”

Fans are suggesting tons of names to the royal couple, so they are not at risk of being short on ideas. “I said to call the baby Tara, after me, and Meghan said she’d consider it!” fan Tara Keogh told  The Guardian after meeting the mom-to-be. While speaking to another Australian on her tour, Meghan stated: “We’ve been given a long list of names from everyone, we’re going to sit down and have a look at them.”

The last name of the unborn child, however, is something that’s a little more certain. Like the Queen’s other great-grandchildren, the next royal baby will likely use the surname Mountbatten-Windsor, The Independent reports.

In the meantime, does the Royal Baby have a nickname?

The Royal Baby sure does! When Prince Harry was giving a speech during the New Zealand leg of the couple’s royal tour, the daddy-to-be spoke lovingly of how excited he was to visit with his and Meghan’s future child.

Dropping his endearing pet-name for the Royal Baby, Harry said: “From myself and my wife and our little bump, we are so grateful to be here.” Watch the clip below, and prepare to have your heart melt.

“Our little bump” and his smile after that is the best thing ever! I’m going to faint!???❤️❤️❤️ pic.twitter.com/dI0Bh2bYCD

Will the Royal Baby ever rule Britain?

It’s unlikely, but not impossible. Prince Harry is currently sixth in line for the throne, meaning his children will fall directly beneath him. Here’s where the new Royal Baby will fit in the order of succession: Prince Charles, Prince William, Prince George, Princess Charlotte, Prince Louis, Prince Harry, Markle and Prince Harry’s unborn child. All Sussex baby additions to the royal family will bump back Prince Andrew, Queen Elizabeth II’s second son, and knock his daughters, Princess Beatrice and the newly-married Princess Eugenie, further down the line.

What will the Royal Baby’s title be?

This one is a little complicated, and it’s all because of a Letters Patent passed in 1917 by King George V, which decreed that: “the grandchildren of the sons of any such Sovereign in the direct male line (save only the eldest living son of the eldest son of the Prince of Wales) shall have and enjoy in all occasions the style and title enjoyed by the children of Dukes of these Our Realms.”

Did you catch that? Here’s the CliffNotes version: only the eldest grandson (that’s Prince George) of the reigning monarch (that’s Queen Elizabeth) should receive the HRH title. However, in 2012, the Queen issued a Letters Patent of her own that declared “all the children of the eldest son of the Prince of Wales should have and enjoy the style, title and attribute of royal highness with the titular dignity of Prince or Princess prefixed to their Christian names or with such other titles of honour.” This is why Princess Charlotte and Prince Louis have their titles—and why there’s a chance the monarch could make the same exception with Prince Harry and Meghan Markle’s children. If the Queen doesn’t step in, the child will hold the title Lord or Lady.

Could the Royal Baby be elected President of the United States?

Here’s an interesting one. Before the American actress and British royal were even married, Twitter user @GPollowitz shared this forward-thinking revelation in a viral tweet:

Prince Harry's kids will be Americans. What if one grows up to be president and is in line for the throne at the same time? Brits are playing long-ball here, but it's a smart move. They want America back and this is how they'll do it.

Let’s break it down. A spokesperson for Kensington Palace confirmed to CNN that Markle will be becoming a British citizen, but added it was “too early to say” if she would retain dual nationality. If she chooses not to renounce her U.S. citizenship and remains a U.S. national, her children will have dual nationality. Which means that yes, they will have the opportunity to run for President of the United States. At 16 weeks old, the expectations for this little royal are being set very high.

Has The Royal Couple Received Any Baby Gifts?

We can only imagine the beautiful presents that having a royal baby would bring. So has the gift giving commenced?

It looks like the expecting parents have received their fist few baby gifts while on their Australian tour. After their arrival at the Australian Governor’s residence in Sydney, they were welcomed with a stuffed koala (baby joey included) and baby Ugg boots for their child. “That’s so cute, it’s our first baby gift!” Meghan said.

Alright, this might be the longest shot of all. But if you want all the information, we’re going to give it to you. American forensic artist Joe Mullins studied photographs of Markle and Prince Harry and created mock-up baby images for The Sun. Take a look.