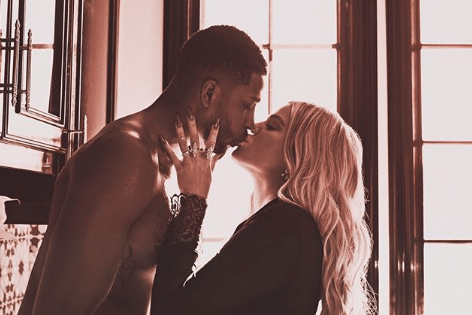 Keeping Up With the Khloé Kardashian & Tristan Thompson Scandal: A Complete Guide

Khloé Kardashian—reality star, denim designer and renowned sister expert—has had a hell of a year. In April, she gave birth to a baby girl, True Thompson, just two days after reports (and video footage) that condemned her boyfriend, 27-year-old Canadian pro-basketball player Tristan Thompson, of cheating.

The pair seemed to miraculously work through the scandal and just last month, they were spotted holding hands by a group of paparazzi. Now, nearly a year after their relationship dominated the news cycle, their names are back in the headlines. This time, Thompson’s been accused of cheating someone close to Khloe: her sister Kylie Jenner’s best friend and roommate, Jordyn Woods.

In an attempt to unpack this never-ending drama, we’ve gone back to the very beginning of Tristan and Khloé’s romance. Grab a snack, because there’s a lot to dive into.

Khloé and Tristan’s relationship was first revealed to the public in Sept. 2016. At the time, the athlete was expecting his first child with Jordan Craig, who was still pregnant with the couple’s baby (born that December).

After a year of blissful romance, rumours start circulating that—like her sisters Kylie and Kim—Khloé is expecting her first child. “Yes, Khloé and Tristan are expecting and they are absolutely thrilled,” a source told People. “This is something Khloé has wanted for years and years and yet it’s more than that: she didn’t want it unless she was in the right relationship for it.”

TMZ reports on Monday that Khloé *might* be in labour in a hospital outside of Cleveland: “We’ve been getting tips Monday morning that she’s in labor. That said, you can’t just rely on tips.”

The Daily Mail shares a video of Tristan “up close and personal” in an NYC nightclub with a “sexy brunette,” who has since been identified as Instagram model Lani Blair. The video was captured this past weekend, when Tristan was in New York with Cleveland Cavaliers ahead of a game against the New York Knicks on Monday evening. The woman who filmed the clips said: “I was there and he was on the table right next to us with a group of friends and some girl who he was obviously making out with all night… They were holding each other and it was so obvious.”

This video was shot last October at a hookah lounge in Washington D.C. The “surveillance footage” shows Tristan sitting with a group of women, “2 of whom are fully engaged with Khloé’s baby daddy,” TMZ says. In the clip, Tristan is seen kissing one woman and half-heartedly motorboating another. And yes, there’s groin grabbing.

The NBA star’s first baby mama, Jordan Craig, shared her thoughts in an Instagram story:“If you respect yourself and you respect others, you would never make light of the misfortune of anyone, nor would you feel indemnified when it comes at the expense of others,” the 26-year-old lifestyle blogger wrote. “Wishing peace for everyone.”

Per Page Six, a source close to the Kardashian family said the very-pregnant Khloé “was devastated when she saw the pictures of Tristan with that girl, she went absolutely ballistic at him. She is not only hurt, she is humiliated and worried for their child. How could he do this, and so publicly, when their baby daughter could arrive within a week?”

During the Cavelier’s hometown game Wednesday night, the NBA star was hit with plenty of boos from the audience. Tristan took the court during a timeout (meaning the PA announcer didn’t say his name), but sources via TMZ say the crowd booed whenever he was shown on screen.

April 11, 2018: Tristan will be allowed in the delivery room

Per TMZ: “Sources familiar with the situation tell us Khloé’s devastated by the recent revelations, but understands the importance of the birth in the lives of everyone involved.”

It’s very possible that the baby’s birth was the first time Khloé saw her BF post-scandal, as according to E!, “Khloé doesn’t want to speak with Tristan. And the family is keeping them apart until she goes into labor.”

“Kris is in Cleveland now giving Khloé as much support as possible and Kim is also heading there as well,” one insider told People. “They’re trying to keep her emotionally stable.” The whole Kardashian klan is reportedly (and understandably) furious at Tristan. The goal is now to get Khloé out of Cleavland and back to Calabasas as fast as possible, without jeopardizing the safety of the baby.

Congratulation baby mama, and cheers to the health and happiness of your new little girl, True Thompson gave birth to a baby girl at 4:00am Thursday morning. Kourtney, Kim, Kris and Khloé’s BFF Malika Haqq were by her side in the delivery room outside Cleveland, Ohio — as was the baby daddy, Tristan Thompson.

Water under the bridge! According to People, Khloé is over this whole infidelity drama, and is ready to put the scandal behind her. “Khloé is feeling nothing but happiness right now. She is head over heels in love with her little girl—she is just consumed with love. Absolutely nothing else matters,” the Kardashian family source says.

Wait…so everything is cool in this fairytale love story? “Basically.”

“She’s basically already forgiven him,” the source says. “She is in a bubble of love and peace and happiness right now, and everything that happened with Tristan is less about ‘cheating’ and more like, it was just a random drunken hookup that meant nothing and was kissing at most and didn’t lead to anything else and was the fault of stupid groupies trying to trap him, and everybody just needs to move on.”

May 2, 2018: Basketball fans continue to diss Tristan at games

So Khloé has forgiven him, but that doesn’t mean the public has. While in Toronto for a basketball game against the Raptors, Tristan was taunted during a free throw. As he tried to focus on shooting, the audience erupted into repeated chants of “Khloé!” Tristan managed to keep his cool, however, making the shot and also bringing home a victory with the Cavaliers. He posted an Instagram from the winning game, captioning it, “Feels good to be back in the 6!”

May 5, 2018: Khloe and Tristan seen together for first time since allegations

Seriously, how much more proof do we need? TMZ obtained photos of Khloe supporting Tristan in Cleveland at a Cavaliers game and then the pair having lunch together. It appears as though the love birds are finally providing use doubters with tactical proof that all is forgiven? Maybe this signals the end of this saga?

Never mind, we’re back. So while the pair still appear to be going strong, we finally have some insight behind why they named their daughter True. People (myself included) found it a little odd that Khloe would name her daughter True right after the cheating scandal broke out. Seems a little shady, no? An insider told Us Weekly that Khloe had had the name picked out for awhile. “She went into labour not even knowing the full scope of the cheating so the option of changing her name wasn’t even brought up. It’s too much for one person to deal with during the crazy time,” said the insider.

As fans continued to bombard Khloe with questions about her current relationship status, she responded to one Twitter user:

“You have no knowledge of what goes on in our household or the enormous rebuilding this takes to even coexist,” she wrote. “I’m proud of my strength. I appreciate your opinion and I hope you hold that same opinion to everyone else who has stayed in situations.”

Five months after the cheating scandal broke, the drama was aired on Keeping Up With The Kardashians.

Replying to comments and fans, Khloe also opened up about her decision to still have Tristan in the room, despite the chaos happening outside of the hospital:

“Regardless of what Tristan did to me, I was never going to take that moment away from True or Tristan. She should not be punished for his actions. He is her father and they both deserve to love one another as deeply as They possibly can #KUWTK.”

Khloe and Tristan, who have remained relatively mum about the status of their relationship, were spotted walking hand-in-hand following the Cavaliers win over the Lakers.

The on-again, off-again couple, called it quits (hopefully for the last time) shortly after reports surfaced that the Thompson, yet again, cheated on Khloe. Unfortunately, the saying, “once a cheater, always a cheater” holds true in this case.

The truly disturbing detail of this whole story, is who he cheated with. The Cleveland Cavaliers player reportedly cheated with Kylie Jenner’s long-time BFF, Jordyn Woods, during a house party he was hosting., with a source telling Us Weekly that Tristan and Jordyn were making out.

Jordyn Woods is basically family to the Kardashians; she was often seen on Kylie’s Instagram stories, she attended countless Kardashian events, starred in Kylie’s show, Life of Kylie, and has even modelled for Khloe’s size-inclusive denim brand, Good American. Talk about major betrayal.

According to the Us Weekly exclusive, Khloe confronted Tristan about his infidelity and he admitted it was true. Since then a lot of people took to social media to address the issue, including Tristan himself! He tweeted, “FAKE NEWS” but then quickly deleted it, probably after realizing there’s no there’s no coming back from this.

Also, Khloe’s bestie, Malika, commented on Hollywood Unlocked‘s post, confirming the affair, she wrote, “TRUE FACTS.” Khloe took to the same post, further confirming the whole situation. Needless to say, get ready for the most intense season of KUWTK to date.

Photography via Instagram/@khloekardashian
Get the best of FASHION in your inbox Thanks for signing up!
The latest fashion, beauty and celeb news delivered right to your email #FASHIONforall Now, check your inbox to complete your subscription
We won’t ever use your email address for anything else
Want even more FASHION? Follow us on social media.