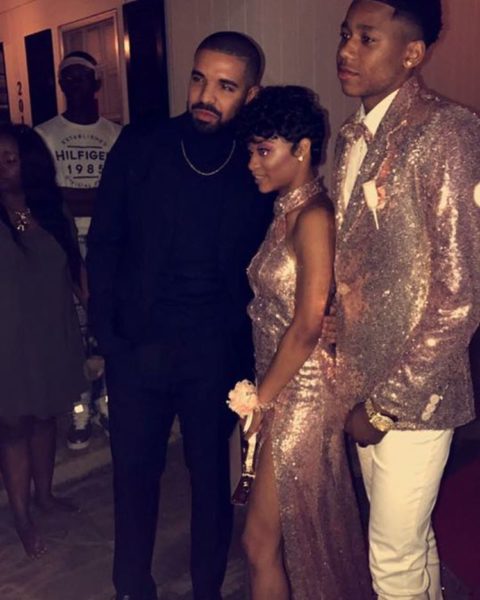 Drake Showed Up at This Prom—and the Students Freaked Out

But did he stay for one dance?

It’s not everyday that you get to be in the presence of Champagne Papi, and it’s even rarer to have him show up at your prom. But if you’re in the fam, literally, you might just have a chance—as was the case with his cousin, Jalaah Moore, who called her Memphis prom at Fairley High School “the best day everrrrr,” for more than one reason.

The King of the 6ix even posted a photo of his cuz and her date to his Instagram, captioning it: “Prom 2017 #FairleyHighSchool #901 #YoungLove @hyfr_jalaah ????”—the ultimate stamp of approval.

There were surprisingly few moments captured on Instagram, though, leaving much to the imagination as to how things went down. But, according to TMZ, it wasn’t just a pop by. He actually paid for Jalaah’s and her date’s custom outfits, ordered them a white Rolls Royce to take them to and from prom as well as threw them an after-party at the Hard Rock Cafe for 400 of their closest friends.

Drake is the latest celeb to get caught up in the prom-mania. Kylie Jenner showed up at a Sacramento High School along with her BFF Jordyn Woods, and Emma Stone responded to a very OTT promposal.

If there’s a lesson in this it is two-fold: Social media can make crazy sh*& happen, but also, be very, very nice to your cousins.