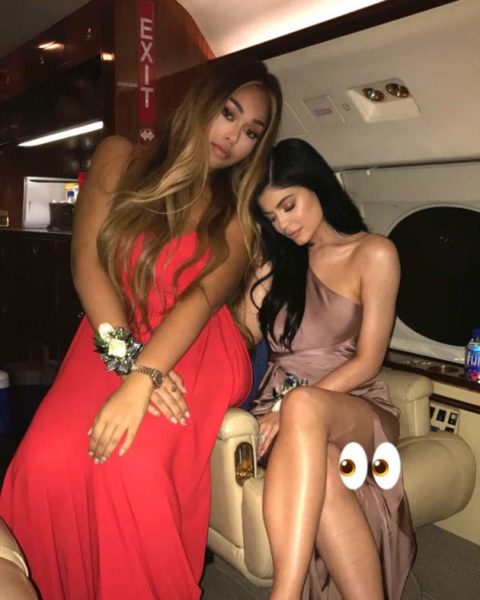 "We went from talking about how he couldn't get any girl but now he has THE girl. #myhero"

Getting rejected by a potential prom date is one of the many nightmare situations that can haunt you as a teenager. But Albert Ochoa, a Sacramento high school student, used it to his advantage. Rather than sulking, the Rio Americano junior got the ultimate revenge: He brought Kylie Jenner to his prom. #nbd

On Saturday, April 8, the Keeping Up with the Kardashians star and her BFF Jordyn Woods got glammed up and flew into Sacramento (via a private plane, of course) and surprised the students of Rio Americano High at Sacramento’s Tsakopoulos Library Galleria. Prior to the party, loyal Kylie Snapchat followers caught a glimpse of the two BFFs on a private plane dressed in floor-length gowns and wearing corsages on their wrists.

@kyliejenner and @jordynwoods Saturday night in the way to surprise a fan for PROM ??? so cute!!!

Needless to say, the modern-day hero became the talk of Twitter. While Kylie didn’t post any photos or videos on her social media platforms, everyone at the party (including Ochoa’s sister) documented the legendary scene, including a slow dance on the balcony.

Kylie at our prom… #sactown pic.twitter.com/4ViX3yILtI

When Kylie Jenner shows up to your prom… pic.twitter.com/PIynhTQ5Nd

According to the Daily Mail, cameras followed Kylie and Jordyn on this little Sacramento adventure. Could this memorable and chaotic scene be documented on a future episode of KUWTK? Only time will tell.

The stunt obviously got everyone in a frenzy. Here are some of the best Twitter reactions:

Y'all Albert is a sac legend now I know the guy who took kj to rio prom that makes me cool I guess? Idk https://t.co/eU8ZYE7cUj

Imagine rejecting a prom date & the guy that asked you takes Kylie… s/o to @albertochoa05 with that come back ✊️ pic.twitter.com/j3nGooKImp

@albertochoa05 stayed focused and managed to get Kylie Jenner to go to prom with him… ✍? taking notes

We went from talking about how he couldn't get any girl but now he has THE girl. #myhero @albertochoa05