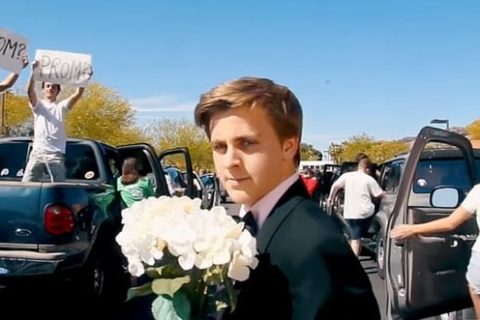 ‘Tis the season for promposals!

With prom (a.k.a. the highlight of many high schoolers’ years) just around the corner, teens are once again getting creative with their way of asking a date to the school dance. And while most will be asking their peers to accompany them, one Phoenix, Ariz., teen is setting his sights higher, hoping Emma Stone will be his prom date.

His way of asking out the Oscar-winning actress? By recreating the opening scene from her Oscar-nominated flick La La Land.

The two-minute clip sees Jacob Staudenmaier along with a dozen of his classmates and a few teachers re-enacting the “Another Day of Sun” number in the school parking lot. Staudenmaier, who does sort of look like Stone’s co-star, Ryan Gosling, took his creativity one step further by changing the lyrics to make them more promposal-friendly.

“I need a date to prom/I should have done it earlier/But now I’ll sing this song/I think I’m kind of freaking out,” the 17-year-old sings. “Jacob Staudenmaier is my name/Emma Stone if you came/I think I’d lose it, Go insane…”

Staudenmaier also acknowledges his resemblance to Gosling (“People say I look like Ryan Gosling/And maybe that’s a bit far-fetched”), though he does admit his vocal chops do not match up to the actor’s. “I know my voice ain’t great, but please be my prom date!”

“It started with the kind of crazy idea of saying, ‘Yeah, maybe I’ll go with Emma Stone to the prom,’” he told USA Today. “I decided if I was going to do this, I really needed to do it big.”

So far, the student hasn’t “heard anything specifically from [Stone], though he did tell USA Today he “heard a rumour and sort of a confirmed truth that her mom has seen it.” However, if the actress doesn’t get back to him, he does have a back-up date.

“I have this girl that I know that says she’d love to go. Even if Emma says yes, she said she would be completely fine with that,” he explained.

Jacob’s video isn’t the only promposal making headlines as of late. Other American teens have been going to extravagant measures in order to win the hearts of their potential prom dates, with one Ohio student running 5.5 miles to spell out “Prom” in a running app and one Tennessee student jumping out of a plane holding a sign saying, “I’m falling 4 u, prom?”

Promposals aren’t always this cute, however, with two South Florida high school students being suspended after holding an offensive sign that read “You may be picking cotton, but we’re picking you to go to prom with us.”

it is two thousand and fucking seventeen… pic.twitter.com/kqZ4XPIlbX

Either way, here’s hoping Jacob gets his date!

UPDATE (April 7, 2017): Emma Stone has since responded to Jacob’s promposal. On Friday, Staudenmaier read the following message from the actress on Good Morning America: “Jacob, thanks for making the greatest proposal I have ever received. I can’t tell you what an honour that was and how much I smiled through that entire beautifully orchestrated video. I’m in London working, but I hope you have the best time at prom, and I’m grateful you thought of me. Thank you. P.S. I do see Gosling around the eyes. Love, Emma.”

The power of the Internet!