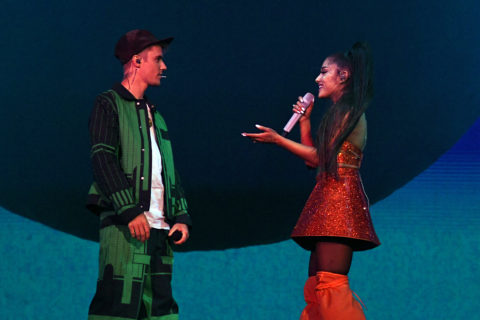 The Canadian Screen Awards announced they're going virtual, Justin Bieber and Ariana Grande collaborated on a new single, and more.

Justin Bieber and Ariana Grande teamed up on quarantine song
Justin Bieber and Ariana Grande have just collaborated on their first single, Stuck WIth U, for a good cause. Net proceeds from the song, which was written and recorded in quarantine, will go to the First Responders Children’s Foundation. The organization, as Grande notes on Instagram, funds “grants and scholarships for children of the first responders who have been impacted by COVID-19.” For the video, the singers requested their fans on social media for video submissions, releasing an instrumental version of the song for people to dance to. “Help us make the #StuckwithU video,” Bieber wrote on Instagram last week. “I want to see you guys having fun in quarantine. This is the prom song for everyone who can’t go to prom now.” In addition to tktkkt, the video features cameos from celebrities like Michael Bublé, Kylie and Kendall Jenner, Chance the Rapper, Gwyneth Paltrow and Jaden Smith.

Selena Gomez announced a cooking show
After Antoni Porowski and Amy Schumer, it’s now Selena Gomez’s turn to announce a cooking show influenced by all the kitchen time clocked during quarantine. The singer will be hosting a 10-episode culinary series on HBO Max, the new streaming service launching May 27, and will get tips from a different master chef in each episode. “I’ve always been very vocal about my love of food. I think I’ve been asked hundreds of times in interviews if I had another career, what would I do, and I’ve answered that it would be fun to be a chef,” Gomez said in an official statement. “I definitely don’t have the formal training though! Like many of us, while being home I find myself cooking more and experimenting in the kitchen.”

Canadian Screen Awards live stream
The Academy of Canadian Cinema & Television announced this week that the winners of the 2020 Canadian Screen Awards (for which you may recall Schitt’s Creek scooped up a record-breaking 26 nominations this year) would be revealed through a series of virtual presentations. In lieu of an IRL ceremony that was cancelled for obvious reasons, the virtual presentations will consist of eight pre-taped, thematically distinct online shows narrated by a notable Canadian and made up entirely of footage from the nominated artists. The various categories include Broadcast News, Lifestyle and Reality, Scripted Programs & Performance, and Cinematic Arts.
The virtual presentations will be live-streamed on the Canadian Academy Facebook, Twitter, and YouTube channels, as well as on academy.ca from May 25 through May 28.

Watch the 2020 #CdnScreenAwards virtual presentations, presented by @CBC and @CTV, with the support of @Telefilm_Canada and @CMF_FMC on Twitter, YouTube and Facebook @TheCdnAcademy on May 25 – May 28, starting at 7:00 PM ET each night.

Stephenie Meyer announced a Twilight prequel
Author Stephenie Meyer’s long-awaited prequel to her hit Twilight series, Midnight Sun, is officially a go. Told from the perspective of Edward Cullen rather than Bella Swan, the book is set for an August 4 release date. “It’s a crazy time right now and I wasn’t sure if it was the right time to put this book out, but some of you have been waiting for just so, so long,” Meyer said on Good Morning America. “It didn’t seem fair to make you wait any more.”

Stephenie Meyer on new book 'Midnight Sun' which comes out August 4: “Hopefully this book can be a fun distraction from the real world. I'm so excited to finally be able to share it with you." https://t.co/rJFjktp50S pic.twitter.com/hdp1xgsiKX

And ICYMI: Bumble is hosting a series of virtual events—panels, workshops, happy hours—this weekend to help keep Canadians connected during this challenging time.