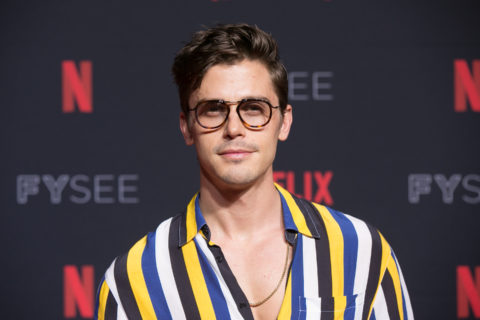 Here’s everything that made headlines this week.

Amy Schumer announced a cooking show
Taking a leaf from Antoni Porowski’s playbook, comedian Amy Schumer is headlining a quarantine cooking show of her own. Schumer married a chef, Chris Fischer, in 2017 and will document her attempts to learn how to cook during quarantine for the upcoming show, set to launch this spring. The eight-episode show is aptly titled Amy Schumer Learns to Cook and will consist of 30-minute self-filmed episodes, to be aired on the Food Network. According to Variety, “Fischer will do most of the cooking using farm fresh ingredients, while Schumer will mix cocktails.”

Antoni announced a new Netflix show
Speaking of Antoni, the Queer Eye star has a new project in the works, based on his own life. According to The Hollywood Reporter, Porowski is teaming up with black-ish creator Kenya Barris on a Netflix show titled Girls & Boys, “loosely based on his real-life dating experience as a sexually fluid man.” The two developed the story together, with the script to be written by Pen15 writers Andrew Rhymer and Jeff Chan.

Lana Del Rey shared a poem from her upcoming poetry audiobook
Last year, Lana Del Rey announced that she would be releasing a poetry book titled Violet Bent Backwards Over the Grass but hadn’t revealed much else until earlier this week, when she uploaded a video recitation of one of her poems on Instagram. The singer doesn’t appear in the two-minute clip herself, but recites the poem from inside a parked car, with the camera looking outward at clear skies and palm trees. She also shared an image of the book’s cover art in a post that has since been deleted, but can be found on the artist Erika Lee Sears’ page.

Being Black in Toronto launched its second mentorship program
The second edition of Being Black in Toronto—an initiative of the Fabienne Colas Foundation’s Youth & Diversity Program: Being Black in Canada—is now accepting applications for its life-changing film program, in collaboration with the Toronto Black Film Festival. Open to Black emerging filmmakers between 18 and 30 years of age from the Greater Toronto Area, the program offers professional mentorship in the audiovisual production of a short film with the theme of “Being Black in Toronto.” According to the application details, “five to 10 young filmmakers will be guided through the many steps in audiovisual production (screenwriting, directing, editing, post-production, etc) and will create a documentary short (maximum 10 minutes).” Applications are being accepted until May 15 and can be found here.

CALL FOR APPLICATIONS – BEING BLACK IN #TORONTO:

Johnny Depp joined Instagram
On Thursday evening, Johnny Depp joined Instagram with an eight-minute video in which he said: “This is my first experience within the world of social media,” adding that now is “the time to open up a dialogue” and that “we cannot and must not succumb to shutting down and giving in to what feels like hellish quarantine monotony.” He also shared a cover of John Lennon’s “Isolation,” which he worked on with musician Jeff Beck, describing it as “especially fitting” given our current crisis. “The song’s about isolation, fear and the existential risk to our world, so we wanted to give the song to you,” he explained. “We truly both hope in our own little way, it helps you get through these unusual times that we’re experiencing, even if it just helps to pass the time as we endure isolation together.”

Photo by Gabriel Olsen/FilmMagic
Get the best of FASHION in your inbox Thanks for signing up!
The latest fashion, beauty and celeb news delivered right to your email #FASHIONforall Now, check your inbox to complete your subscription
We won’t ever use your email address for anything else
Want even more FASHION? Follow us on social media.