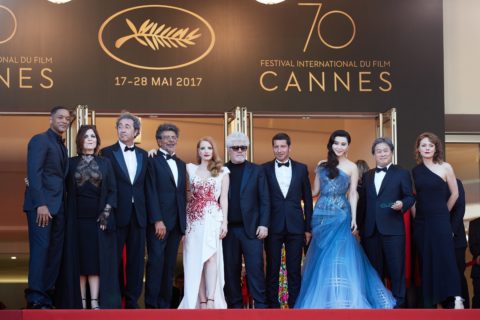 Cannes 2017, By the Numbers: The Best Moments from the Film Festival

After 12 days of red carpet premieres, screenings, galas and photocalls, we can officially wave good-bye to the 70th Annual Cannes Film Festival.

Judging from the starry turnout, we have to say it might have been the most A-list-packed one yet, with everyone from Rihanna to Nicole Kidman to Aishwarya Rai Bachchan touching down in the French Riviera for the 2017 festivities. If you haven’t kept up with this year’s Cannes Film Festival, not to worry. Scroll down and find out all the important info you need to know, from who won the much-coveted Palme d’Or award to how much Carine Roitfeld’s clothing collection presented at the amfAR gala went for. (Hint: a lot.)

metres of red carpet that were used.

featured films were screened in the French Riviera.

The number of stairs every star had to walk up before taking the iconic photo in front of the Grand Théatre Lumière.

The number of looks from Carine Roitfeld’s Golden Age of Hollywood collection presented at the 24th Cinema Against AIDS runway show during the amfAR gala, which was held at the Hôtel du Cap-Eden-Roc. Models including Bella Hadid, Emily Ratajkowski, Hailey Baldwin, Jasmine Tookes and Irina Shaky walked the show.

euros: The price for the entire collection of dresses that were auctioned off at the benefit gala.

The Palme d’Or is made up of 118 grams of pure gold by the jewellers from Chopard.

The number of awards that were handed out at the Closing Ceremony on Sunday May 28, including the Palme d’Or (The Square), Jury Prize (Loveless), Best Director (Sofia Coppola for The Beguiled), Best Actress (Diane Kruger for In the Fade), Short Film Palme d’Or (A Gentle Night), Caméra d’Or (Jeune Femme), the Grand Prix (120 Beats per Minute), Best Screenplay (The Killing of a Sacred Deer and You Were Never Really Here) and Best Actor (Joaquin Phoenix for You Were Never Really Here).

The Best Actress award winner Diane Kruger (for In the Fade) donned at least five looks, but it was her Jonathan Simkhai off-the-shoulder dress for the Closing Ceremony that topped the rest.

The number of times Elle Fanning wowed us in a princess gown.

Sofia Coppola is the second female to win the Best Director award in the Cannes’ 70-year history for The Beguiled (the first being Yuliya Solntseva, a Soviet filmmaker, in 1961 for The Chronicle of Flaming Years).

Okja and The Meyerowitz Stories were the first two (and maybe the last) Netflix movies to be admitted into the festival competition, which sparked a lot of controversy and boos from some of the traditional movie-goers and French film-industry executives in France. This prompted the festival director, Thierry Frémaux, to declare that only theatrical releases available in France will be allowed to compete for the Palme d’Or prize.

The Palme d’Or was awarded to Swedish film The Square, directed by Ruben Östlund

Pair of socks with sandals were spotted (courtesy of Kendall Jenner)

Once again, zero pairs of flats were spotted on the red carpet.

Photography by Oleg Nikishin/Epsilon/Getty Images
Get the best of FASHION in your inbox Thanks for signing up!
The latest fashion, beauty and celeb news delivered right to your email #FASHIONforall Now, check your inbox to complete your subscription
We won’t ever use your email address for anything else
Want even more FASHION? Follow us on social media.