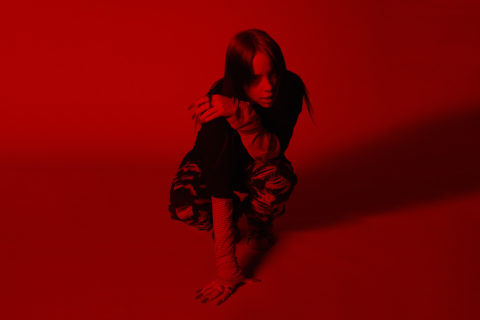 The Gucci-clad singer performed a selection of songs–and got political–during the show.

Billie Eilish treated fans to a livestream show on Saturday, where viewers became part of an innovative event that cleverly illustrated what the future of concerts will be – that is, to take a phrase many MuchMusic fans will be familiar with – both intimate and interactive.

Wearing a top-to-toe crystal embellished Gucci look and rocking her signature lengthy nails, Eilish performed a variety of songs including the theme to the forthcoming James Bond movie, No Time To Die, as well as hits like Xanny, Bad Guy and the new single, My Future. The stream’s pre-show included a teaser for a documentary about Eilish, which sees a February release, as well as a video detailing the songwriting process she undergoes with her brother and musical collaborator, Finneas.

Any fan of Eilish’s would’ve delighted at this glimpse into her world, and moving forward concert livestreams will likely continue to further the ability for a performer to afford their audience such opportunities beyond the sphere of social media just as fashion brands have harnessed the power of the digital world to better interact with consumers. Eilish also used Saturday night’s platform to reach out to fans in other ways, including continuing to address the body shaming that has plagued not only her rise to fame but that of so many others.

While her physical set-up – audience-free with the exception of her crew – was seemingly modest (she was joined by Finneas and drummer Andrew Marshall), Eilish took fans on a virtual journey thanks to the power of XR technology. Living up to its promise of drawing ticket holders into an extended reality, LED screens were used to transport us to three-dimensional worlds from the deep sea to outer space, and at one point saw Eilish in a setting similar to that of the Xanny music video. Graphics like shadows and smoke heightened the ambiance, and instilled the sense that even though they weren’t in the room with her, there was still magic to be felt.

Multi-lingual chat rooms for fans added to this connective experience, and the stream of enthusiastic comments running alongside Eilish’s set (plus featured footage of select concert viewers rocking out from their own homes) were a silent reminder of just how potent she and other mega-stars are as a force for feeling.

And speaking of being a force, Eilish reminded her audience multiple times how important it is to vote in the current U.S. election; she even had a few pre-recorded messages from stars like Lizzo, Alicia Keys, Steve Carell and Jameela Jamil echoing the sentiment. Though we were there for the entertainment, seeing such names use their power to inspire civic action gave the event an added layer of importance.

Photograph courtesy of Universal Music
Get the best of FASHION in your inbox Thanks for signing up!
The latest fashion, beauty and celeb news delivered right to your email #FASHIONforall Now, check your inbox to complete your subscription
We won’t ever use your email address for anything else
Want even more FASHION? Follow us on social media.