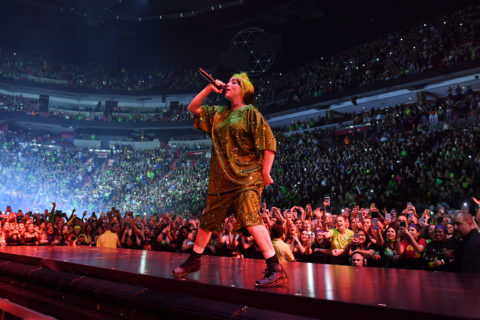 Billie Eilish Just Made a Powerful Statement About Body Shaming

Billie Eilish hasn’t been on the music scene all that long but she already has a highly recognizable look. The oversized coordinated separates the 18-year-old singer favours have become such a signature that her no-fuss style became a go-to costume for Halloween this past year. She’s publicly addressed this penchant for baggy clothing, saying in a 2019 Calvin Klein ad: “I never want the world to know everything about me. I mean, that’s why I wear big, baggy clothes. Nobody can have an opinion because they haven’t seen what’s underneath, you know?”

During the opening of her world tour in Miami on Monday night, Eilish made a poignant statement about the excessive policing and analysis of women’s bodies with a pre-recorded video that shows her undressing and disappearing into an inky pool of water.

VIDEO: In an interlude, Billie takes off her hoodie and blouse, while speaking about body shaming. #WDWGMiamipic.twitter.com/XY9L00ntlb

She goes on to talk about the expectations that society places on women’s bodies and the constant scrutiny of women in the public eye.

“So while I feel your stares, your disapproval or your sighs of relief, if I lived by them, I’d never be able to move. Would you like me to be smaller? Weaker? Softer? Taller? Would you like me to be quiet? Do my shoulders provoke you? Does my chest? Am I my stomach? My hips? The body I was born with, is it not what you wanted?”

Eilish has spoken out in the past about the way society judges women based on what they’re wearing. In an interview with Pharrell Williams for V Magazine in 2019, she said, “It’s a weird thing because I know a lot of what I hear is a positive or people trying to be positive about how I dress. Even from my parents, the positive [comments] about how I dress have this slut-shaming element. Like, ‘I am so glad that you are dressing like a boy, so that other girls can dress like boys, so that they aren’t sluts.’ That’s basically what it sounds like to me. And I can’t [overstate how] strongly I do not appreciate that, at all… I don’t like that there’s this weird new world of supporting me by shaming people that [may not] want to [dress like me].”

In the video interlude at her concert, the Grammy winner addressed this tendency for slut-shaming and the assumptions that people make about women based on how they dress.

“If what I wear is comfortable, I am not a woman. If I shed the layers, I am a slut. Though you’ve never seen my body, you still judge it and judge me for it. Why? You make assumptions about people based on their size. We decide who they are. We decide what they’re worth. If I wear more, if I wear less, who decides what that makes me? What that means? Is my value based only on your perception? Or is your opinion of me not my responsibility?”

No person should be critiqued based on their appearance, yet these deep-rooted prejudices live within us all, shaped by society and long-held but misguided expectations. In a world constantly judging and evaluating women based on the clothes they wear and how much skin they bare, Eilish’s message is a powerful and vital one.

Photo by Kevin Mazur/Getty Images for Live Nation
Get the best of FASHION in your inbox Thanks for signing up!
The latest fashion, beauty and celeb news delivered right to your email #FASHIONforall Now, check your inbox to complete your subscription
We won’t ever use your email address for anything else
Want even more FASHION? Follow us on social media.