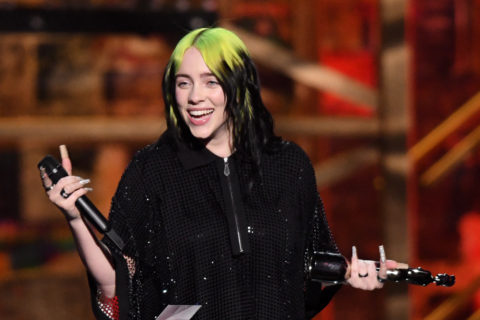 From a Billie Eilish documentary on Apple TV+ to a book of poetry from Lili Reinhart, here’s what made headlines this week.

Apple announced a Billie Eilish documentary
A multiple Grammy winner at just 18, Billie Eilish is the subject of a documentary that will be landing on Apple TV+ early next year. Titled Billie Eilish: The World’s A Little Blurry, the film is directed by Oscar-nominated filmmaker RJ Cutler and is slated for a theatrical and streaming release in February 2021. The singer’s debut album “When We All Fall Asleep, Where Do We Go?” was released in 2019, catapulting her to global fame and becoming the best-performing album of the year. No word yet on what stage of Eilish’s rise to fame is chronicled in this documentary, but stay tuned for details.

The documentary film about Billie Eilish, titled “Billie Eilish: The World’s A Little Blurry” and directed by RJ Cutler, will be released in theaters and on Apple TV+ in February 2021. pic.twitter.com/eSMzYE7Jhz

Lili Reinhart released a book of poetry
Riverdale actress Lili Reinhart has spoken publicly about how she likes to write “countless poems” when she’s “going through something — depression, anxiety, a breakup.” Her first collection of poems—written over the past five years—has now been released. Titled Swimming Lessons, the book of poetry explores “the euphoric beginnings of young love, battling anxiety and depression in the face of fame, and the inevitable heartbreak that stems from passion.”

Actress @lilireinhart opens up about how she battles her demons and her new poetry book #SwimmingLessons. @ErielleReshef has the story. https://t.co/ISIENvLcOh

Anthony Vaccarello and Helmut Lang teamed up for an art collaboration
Saint Laurent creative director Anthony Vaccarello has teamed up with reclusive (and now retired) Austrian designer Helmut Lang on a series of sculptures made of deadstock fabric. Taking the shape of floor-to-ceiling poles, the artworks also utilize unused hardware from Vaccarello’s past collections, mixed with pigmented resin and aluminium. The sculptures will be on display from September 30 to October 30 at Saint Laurent’s concept store, named Rive Droite, before moving on to Los Angeles where they will be available for purchase.

Canadian actress Iman Vellani joined the Marvel Cinematic Universe
Iman Vellani, an 18-year-old actress from Markham, Ont., has been cast as Kamala Khan aka Ms. Marvel in an upcoming Disney+ live action series based on the superhero. The character of Ms. Marvel first appeared in the comic books in 2014, and as a Pakistani-American teen based in New Jersey, is the first Muslim character to star in her own title in the franchise. And Vellani’s not the only Canadian actress taking on a superhero role. Last month, it was announced that Tatiana Maslany would be playing She-Hulk in another upcoming Disney+ series.

And ICYMI: Inside Out, Canada’s largest LGBTQ+ film festival, has gone virtual for 2020. Read more about the online festival, which runs till October 11, here.