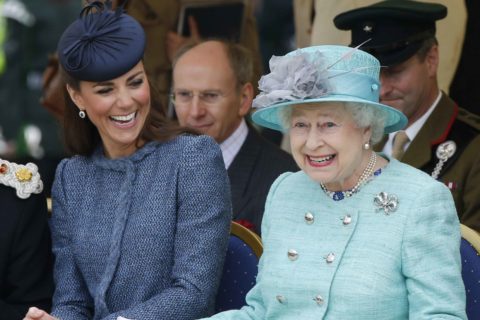 11 Facts About the Royal Family That Will Make You Say “What?!”

LOL jk. They may dad dance and wear Zara every once in a while, but doesn’t mean these crown-jewel-wearing-people are anything like us common folk. Britain only has a monarchy because of tradition, and so the Royal family would be nothing if not for the traditions they meticulously keep. Some of these customs are charming and cute. Others, are downright morbid and mean. (Take notes, Meghan Markle. Here are some of the weird and wacky ways you can continue your streak of rule breaking.)

At christenings, they eat 7-year-old cake

At Prince Louis’ christening, held July 9, 2018 at St James’ Palace in London, the royal family served guests a cake from seven years ago. The treat may sound stale, but it’s actually quite a sweet British custom. The fruit cake served is a saved tier from Prince William and Duchess Kate’s 2011 wedding cake, and has been laced with brandy to last many (many) years. The sentimental confection was also served at little Louis’ siblings, Prince George and Princess Charlotte’s, christening—though it probably tasted a little bit fresher at their ceremonies.

They always travel with black clothing

According to The Independent, the Royal fam is required to pack a black ensemble in their bag every time they travel abroad. Because, you know, somebody might die while they’re away, and they need to make sure their outfit matches the mood when they arrive on home soil. Pretty morbid, but very practical.

Essie’s “Ballet Slippers” nail polish has long been a favourite of blogger, celebs, normal people—and the Queen of England. According to the Essie website, in 1989 Queen Elizabeth’s hairdresser sent the company a letter requesting a bottle of “the only colour Her Majesty would wear.”

They aren’t allowed to play Monopoly

Back in 2008, Prince Andrew was presented with the board game Monopoly. The gift giver likely didn’t anticipate the Royal’s odd response to the kind gesture: “We’re not allowed to play Monopoly at home,” Prince Andrew disclosed. Why? Well, apparently “it gets too vicious.”

The Queen uses her purse to send secret signals

“It would be very worrying if you were talking to the Queen and saw the handbag move from one hand to the other,” Royal Historian Hugo Vickers told People. Apparently, this subtle signal is how the Queen indicates to her staff that she’s ready to wrap up her current conversation.

They don’t have a last name

Merry Christmas from…”The Royals?” There’s a reason why you don’t hear Prince George and Princess Charlotte’s last name—they, uh, don’t really have one. *Technically*, since 1960, the Royal last name has been Mountbatten-Windsor, which is a compound of the Royal house name and Prince Philip’s pre-monarchy surname.

They aren’t supposed to eat shellfish

There is an old rule in England that the Royal family is never served shellfish in order to avoid food poisoning. Prince Charles doesn’t follow this rule, because does he really follow any rules (cough Camilla)?

At 91 years old, Her Majesty has never needed to take a driving test—and that’s her “royal prerogative.” Queen Elizabeth trained as a driver and a mechanic during the Second World War, so even as an unlicensed 91-year-old she’s probably a better driver than you or I.

They aren’t allowed to touch commoners

Historically, it’s been widely understood that members of the public can only touch members of the Royal family with a formal handshake. But the protocol is sometimes broken—like in this picture of Prince William greeting New Zealand’s former Governor General Sir Paul Reeves in the traditional Maori way.

The Queen drinks 4 cocktails every day

Yaaaas Queen. Her Majesty is know to indulge in chocolate cake, champagne before bed and finger sandwiches with the crust cut off. Check out our full food (and beverage!) diary for Queen Elizabeth here.

Photography by Phil Noble - WPA Pool/Getty Images
Get the best of FASHION in your inbox Thanks for signing up!
The latest fashion, beauty and celeb news delivered right to your email #FASHIONforall Now, check your inbox to complete your subscription
We won’t ever use your email address for anything else
Want even more FASHION? Follow us on social media.