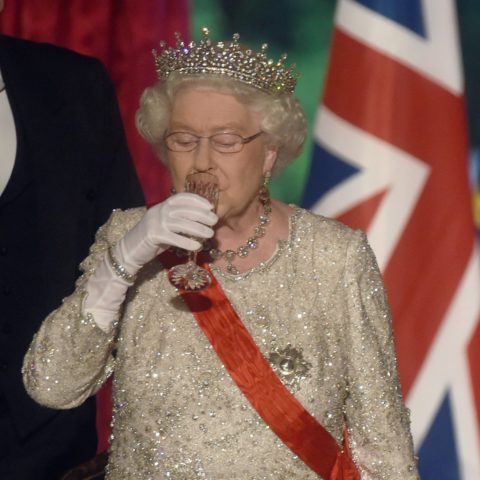 Here’s How to Eat (and Drink!) Like the Queen of England

Start your day with tea and end it with champagne.

When I think of a royal diet, I picture something akin to the Mandarin buffet. An all-you-can-eat Thanksgiving-style spread laid out across long gold-plated tables. There is sushi and prime rib and anything you could dream of at the snap of your fingers. This, I can only assume, is why kings and queens have a long history of obesity.

Careless indulgence, however, is not Queen Elizabeth II style. I mean, you don’t live to 90 on a diet of pizza and ice cream, right? Business Insider did a deep dive into the longest reigning monarch’s daily menu, revealing insider secrets that make us love Her Majesty even more.

For breakfast, the monarch opts for simplicity. Just “a few” biscuits and a pot of Earl Grey tea. No milk. No sugar. Just a bitter cup of tea to wash down her dry, flaky pastry. She’ll then move on to toast and light marmalade, or a bowl of cereal (Special K is her brand of choice). If she’s feeling crazy, Queen Elizabeth II will request scrambled eggs with smoked salmon and truffle. Finally, something I can get on board with.

After a couple hours of ruling her kingdom, Her Royal Majesty is ready for a drink. According to Business Insider, Queen Elizabeth enjoys a gin and Dubonnet with a slice of lemon and a lot of ice before she sit down for her midday meal. Because it’s 5 o’clock in some far off British colony, right?

For lunch, the Queen keeps it simple (again). She’ll have a green salad with grilled chicken or fish—very modest and very low carb.

I’m pretty sure the best thing about being British is the lavish afternoon snack arrangement that comes with high tea. According to former royal chef Darren McGrady, the Queen’s favourites include honey and cream sponge cake, finger sandwiches “with the crusts removed,”  jam pennies and the chocolate biscuit cake that was served at Prince William and Kate Middleton’s wedding. You know what? This tiered goodie spread might even be the best thing about being the Queen of England.

For HRM’s final meal of the day, fresh fillets of beef, venison, pheasant or salmon are brought in from farms in nearby Sandringham and Balmoral. The meat is served with a sauce of mushroom, cream and whisky. She’s also a fan of Sunday roast, as long as it’s served well done.

For dessert, only strawberries and peaches from the Windsor castle greenhouse will do. She’s also an outspoken fan of sweets and has been labelled a “chocoholic” by former Buckingham Palace chefs.

Like a true Queen, Elizabeth II indulges in a sparking glass of bubbly before bed. The image is priceless: a 90-year-old monarch, taking off her crown and sitting down for a sip of champagne. Bow down, to the boss of all bosses.