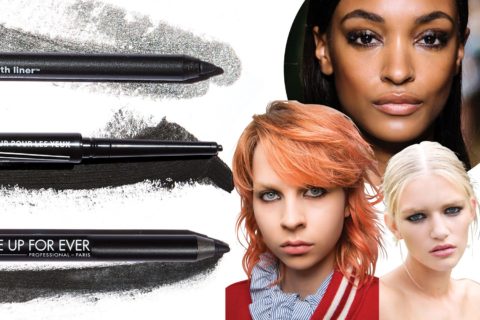 The precise, graphic lines of last season gave way to spring’s less-than-perfect smudges, which came in many forms. At Prabal Gurung, Diane Kendal was inspired by Gloria Steinem (“She always did tend to wear a lot of liner. It’s strong but feminine”), and at Balmain, Tom Pecheux created greasy black eyes that were meant to evoke post-swim glamour.

At 3.1 Phillip Lim, Francelle Daly for Nars, played with negative space, not applying eyeliner on the inner or outer corners, and instead sticking to the centre of the upper and lower lash line. “It gives a dimension to it,” said Daly. “It’s a new way of looking at the shape of the eye. It’s not about putting a line on the top and bottom and walking out the door, and deconstructing the way you wear eyeliner.”

At Rag & Bone, the look was unabashed sexiness. “You don’t know if it’s the end of the night or the morning,” said Pecheux. “You don’t bother with liquid liner. You do it with a black pencil and let it run down. Is she running home to mom and dad or did she get up late and ran out of time to redo her makeup? It can be anything.”

The key to this look? Not overthinking it. Use your fingers to blend, smudge and generally muck it all up. “If I were being politically correct,” explains Pecheux, “I’d say a Q-tip, but I actually like to stick my finger in there.”