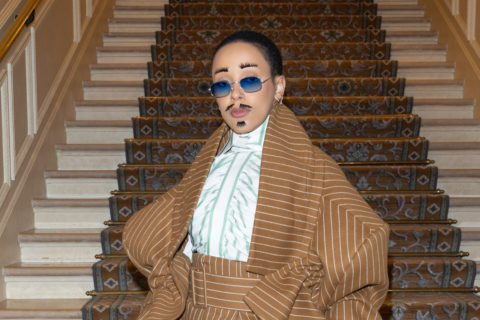 This article was originally published on October 6, 2022 and has been updated.

When it comes to makeup, Doja Cat is a woman of the world. She had her E-girl phase. She long embraced an alien aesthetic. Now, after shaving her head and eyebrows, she has entered an “I’ll try anything” era. And we’re all better for it.

To mark the start of Paris haute couture fashion week on January 23, the pop star further cemented herself as a boundary-breaking beauty icon — no catwalk necessary. Sitting front row at the Schiaparelli Spring 2023 show, Doja Cat was adorned head to toe in ruby-red Swarovski crystals. The look — which reportedly took nearly five hours to complete and involved 30,000 hand-applied gems — was created by famed makeup artist Pat McGrath, and speaks to the Planet Her singer’s multidimensional beauty prowess.

I need to know how long it took Doja Cat to get ready for the Schiaparelli show because this is crazy good pic.twitter.com/5zoKLK6ARp

This is not the first time Doja Cat has made the front row of fashion week her creative playground. If history is any indication, it also certainly won’t be the last.

Recall, back in September 2022, when Doja Cat (quite literally) went out shining to commemorate the end of Fashion Month. At the Awake Mode show on October 4, the 27-year-old stepped out with her skin covered in a glimmering layer of gold thanks to makeup artist Laurel Charleston.

In fact, while attending events across the city, Doja Cat sported variations of sculptural eyebrows, body paint and intergalactic illustrations. To attend the Mônot show on October 1, her face was coated in white, with dark blue contouring and bright red lipstick. On her forearms, black designs mimicked the look of opera gloves.

Earlier that same day, she attended the Andreas Kronthaler for Vivienne Westwood show with a completely different ensemble — because, of course. Thin spikes sat in place of eyebrows and dark lightning-bolt eyeliner crept onto her nose.

As the week went on, her looks got more shocking — hence the aforementioned gold finale. For the Givenchy show, makeup artist Sophia Sinot gave her smudged black checkerboard-design lips with studs for eyebrows. To attend a party hosted by Beyoncé, the singer’s whole face became an optical illusion thanks to an expertly-placed swirling line. “After I was finished she asked me if I could sign her neck like an artist signs their work when they’re finished,” Charleston wrote on Twitter. Herein lies the genius of Doja Cat’s maquillage mantra.

Think about it: for the Grammy-winning singer, makeup is yet another way to perform. And lately, she’s been leaning heavily into this aspect of her artistry. After shaving her head and eyebrows on Instagram Live over the summer, Doja Cat has used her face as an unrestricted canvas. More and more, the singer goes against the beauty grain — from painting her own detailed facial designs to sporting a cow pattern on her head. With each new wonderfully weird look, she advocates for beauty as a means of art instead of a boring background feature.

These days, show-stopping style statements are hard to come by. With minimalist makeup routines reigning supreme and red-carpet looks often blandly replicating the runway, there’s a lack of risk-taking among celebrity beauty. Doja Cat, on the other hand, uses makeup as an accessory that’s up for interpretation and meant to garner a reaction.

Case in point: for the Balenciaga show back in October, she sported an eyeshadow look that resembled a black eye and split lip. “I think people are going to love it,” she told Vogue. “And I think that, as they do, people are also not going to love it.” But either way, Doja Cat doesn’t seem to care. The thing is, this subversive style isn’t supposed to appeal to everyone. Who can forget when Lady Gaga wore her meat dress to the 2010 MTV Video Music Awards? She was ridiculed at the time, but it’s since gone down as one of the biggest moments in recent fashion history.

Of course, an important element of any memorable ensemble is the personality behind it. Doja Cat stands out not only because of the masterful creations on her skin, but the passionate energy that she carries with each design.

As we head into a new Fashion Month, we can surely expect even more surprising surrealist Doja Cat statements. By pushing against beauty boundaries and sporting thought-provoking paintings on her face, the star’s makeup aesthetic continues to be unapologetically unique. And isn’t that what art is all about? In the immortal words of TikTok: I don’t want to be pretty, I want to be iconic. If that’s Doja Cat’s mission, consider it accomplished.