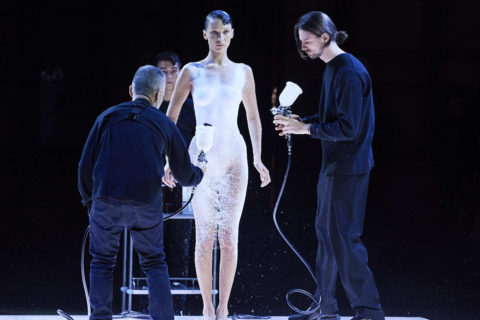 Also, did you see that Balenciaga runway?!

The grand finale of the fashion weeks has now come and gone, and wow! What a Spring 2023 season! Anne Hathaway recreated The Devil Wears Prada in New York. British designers all paid tribute to the late Queen Elizabeth II in London. Gucci had us seeing double in Milan. And most recently, the Bella Hadid Coperni spray paint dress went viral during Paris Fashion Week.

But the biggest takeaway from these last few weeks is the marrying of style with celebrity sightseeing. Game of Thrones’ Gwendoline Christie started the show at Thom Browne. FKA Twigs walked at Miu Miu. Ye surprised everyone at Balenciaga. Cher made her runway debut at Balmain. And then, a few weeks ago, Paris Hilton made a surprise cameo at Versace and Lil Nas X closed the Coach show. The list goes on.

What does this mean moving forward? Well, this trend has been some time in the making. The fashion world becomes increasingly crowded, and for brands, it’s becoming harder and harder to stand out. A simple solution is to invite a famous face onto the stage and watch the social media traffic roll in. So next season, expect to see even more cameos.

Until then, we’ve rounded up the most viral moments from Paris Fashion Week, including Bella Hadid at Coperni, Loewe’s balloon shoes and more.

At a show with many inspirations — freedom of movement, Karl Lagerfeld, the Nouvelle Vague, the 1961 film Last Year in Marienbad —one muse stood out above the rest: Kristen Stewart. “Of the people around me, [Kristen] is the closest to Gabrielle Chanel, at least to my idea of her,” noted creative director Virginie Viard. “She understands Chanel, its clothes. And with her, it becomes even more modern. This collection, it’s also her.” The looks channelled Stewart’s laid-back energy with slouchy trousers, flowing fabrics and deconstructed prints, not to mention numerous short sets (a style that broke all the rules when Stewart wore it to the (excessively dressy) 2022 Oscars).

Dior: Who run the world? Girls!

In the five years that creative director Maria Grazia Chiuri has been at Dior, the message has been clear: Who run the world? Girls! Okay, well, technically, it wasn’t her but Beyoncé who said these words, but Chiuri has always done her talking through her collections, and this Spring 2023 assortment wasn’t any different. In line with her other past muses, this season, the designer dedicated her collection to Catherine de’ Medici, the powerful 16th-century ruler and early feminist icon. Her three-decade reign was reinterpreted through dramatic, Medieval-inspired looks, complete with corsets, hoop skirts, black lace and embroidery.

For Nicolas Ghesquière, creating Louis Vuitton’s Spring 2023 presentation was a collaborative process. He enlisted the help of French artist Philippe Parreno and production designer James Chinlund (The Batman) to build a massive set reminiscent of a “carnival flower” with large, red petals — almost violent in its beauty. “It’s the first time I designed a collection in dialogue, in correspondence, with someone,” he says, and the collaboration was evident in the proportions of each look, from giant zippers and inflated necklines to zoomed-in prints. “The idea was to look at something pretty, something sweet, and to see in those elements what strength they have.”

Unless you were doing a major cleanse or your phone broke, chances are this Bella Hadid moment at Coperni was ALL over your social media feed. In case you did miss it, the designers at Coperni spray painted a white dress onto the model (on the actual runway!) using a patented spray-on fabric developed by a London-based company, Fabrican. While the garment initially looked like spider webs, the layers instantly transformed into a pebbled cloth, and Bella Hadid looked ready to go clubbing. But let’s give credit where credit is due: Alexander McQueen did it first. In fact, he did it 23 years ago for his Spring 1999 collection when robots spray painted a model wearing a white dress. Still, Coperni did it well, and it was an incredible moment to watch.

Balenciaga: The one with the mud

Balenciaga by Demna always promises a viral moment or two and Spring 2023 didn’t disappoint; models strutted through a mud pit, puddles and all, as wet dirt spackled their legs. According to the show notes, the muddy display was a metaphor for digging for truth and being down to earth. Ye opened the unconventional presentation, stomping down the runway in a black utility jacket and leather moto pants — hood up over a ball cap emblazoned with “2023.”

Fashion and fantasy have always been intertwined, but no more so than in Thom Browne’s Spring 2023 collection. Telling the story of Cinderella through clothing, actor Michaela Jaé Rodriguez played “Cindy” and came down the catwalk in all white. Game of Thrones’ Gwendoline Christie was “Charming,” dressed in a duchess silk satin embroidered dressing gown. Then there were the stepmother and stepsisters in polka-dots, their cat, cleverly alluded to in a jacket with yarn-ball embroidery, mice in bows, the fairy godmother and her entourage in poodle skirts, and one giant glass slipper at the end of the runway. Happily ever after never looked so good.

If you think condoms have only one use, think again. At Botter, models wore the prophylactics as gloves — albeit, pretty impractical ones — filled with dyed water. For designers Rushemy Botter and Lisi Herrebrugh, it was a way to “collaborate with nature” and raise awareness about the plight of our oceans, which fill with more and more plastic each year. In the same vein, many of the looks were inspired by scuba gear (as though the models were peeling their wetsuits off of their shoulders), while some of the clothing was made from a kelp-based fabric. They promise more of the groundbreaking technology in seasons to come.

Loewe: Balloons, and minis and plastic flowers, oh my

Trust JW Anderson to get everyone talking. The creative director sent models down the Loewe Spring 2023 runway in micro-mini dresses, balloon shoes, plastic arthuriums and 8-bit motifs. The wild designs blurred the lines between the real, the fake and the digital. It was a study in contradictions.

Coperni Spring 2023. Photography Courtesy of ImaxTree
Get the best of FASHION in your inbox Thanks for signing up!
The latest fashion, beauty and celeb news delivered right to your email #FASHIONforall Now, check your inbox to complete your subscription
We won’t ever use your email address for anything else
Want even more FASHION? Follow us on social media.