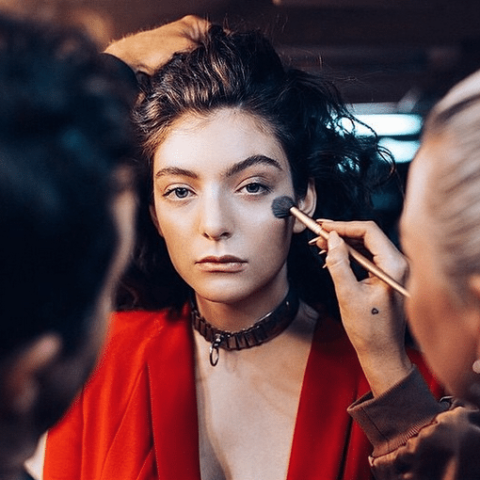 Lorde’s Makeup Artist on the Singer’s Most Iconic Moments

Do you remember Seventeen Magazine’s “Letter to Myself” series, where the editors would ask celebrities to give their teenage selves advice about beauty, dating and self-esteem? (For some reason I remember Fergie’s very vividly?) It was always quite touching to read celebs’ thoughts on the wisdom they’ve acquired with age and the lessons they’ve learned since their teenage mistakes.

Fast forward to today and it’s incredibly hard to imagine Lorde doing a similar exercise in a decade or two about her current self. The singer has a signature look so distinct that she’s credited with the recent explosion in sales of purple lipstick. She’s spoken out against photoshop and airbrushing, and seems so composed and mature that there are countless rumours swirling about her real age. So what exactly would Lorde one day write to her teenage self? “Hey, great job on that limited edition sold-out collaboration with M.A.C” and “You literally changed the face of pop music” seem like pretty good places to start.

We chatted with Lorde’s makeup artist Amber Dreadon to find out more about the singer’s beauty routine, favourite products and most memorable award show moments.

“Lorde loves natural makeup so we keep things as minimal as possible most of the time, with the obvious bold lip every now and then,” says Dreadon. “We’ve been changing [her look] a lot as we go along […] but the bold lip was such a statement and really had such an impact on beauty at the time that people always tend to think of the dark lip first!”

It’s funny how signature looks work, because Dreadon is right; a quick Google search of Lorde brings up as many nude lips as it does dark ones, but when we think of the singer, we can’t help but imagine her in head-to-toe black (lips included). That’s why looks like the pink Vionnet suit she wore to the Nirvana induction in the Rock n’ Roll Hall of Fame are so shocking but really have very little effect on our mental image of Lorde; almost like it was a (very chic) glitch.

Case in point: Lorde’s 2015 Golden Globes hair and makeup were totally fresh and shocking because they weren’t the huge curls and moody lipstick we were expecting. “The Golden Globes look was really an idea we had discussed a while back but saved it for the right event and right outfit. It had been summer in New Zealand at the time so we worked with the little bit more of a tan than what she usually has and went with a more bronzed eye,” explains Dreadon. “We talk about [new] things we could try out all the time and save up ideas for the right moment.” Leave it to Lorde to make a red lip and a ponytail exciting.

“I’m inspired more by the international runways than traditional Hollywood glam. We’re always back in New Zealand and it [has] a moody dark vibe going on, so that keeps everything feeling really unique,” Dreadon tells us. “The main thing for me is to try to keep everything looking lightweight and minimal. The whole before and after makeup photo on Instagram is my worst nightmare!”

Of course, it’s easy to experiment with makeup since Lorde’s wardrobe is made up of primarily black and white pieces. That kind of neutral palette is a makeup artist’s dream. “It really means we can play around a little with coloured eyeliner, every now and then doing a bright blue or bronze, and we can vary the lip shades pretty easily.”

We would expect nothing less than a constant state of openness and experimentation from the same person who performed at her first-ever Grammys last year with black paint-stained fingertips. “We had been looking at references and beauty ideas and a picture of Michele Lamy came up,” explains Dreadon of the inspiration behind the look. “I just had to [figure] out how to make it work for the event so that she didn’t have stained hands the whole night. We ended up getting a gel polish done on her nails, then I used a black nail polish to paint the fingertips so it would dry and not get all over anything. When she got changed we removed the polish with nail polish remover which left the gel still perfect on [her] nails!”

And as for our personal favourite Lorde move, the lipstick smear at the American Music Awards, Dreadon tells us “it was hilarious because we had the fastest change ever after her [performance] so I had to get the lipstick off her cheek unexpectedly in record time! It was a totally iconic moment that took everyone by surprise.”

For more on Lorde, check out our favourite red carpet moments and see her FASHION cover story here.