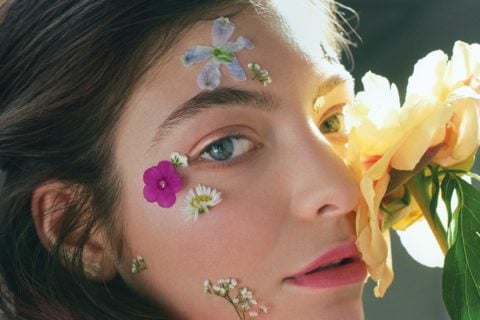 Now that her latest album, Melodrama, is a bona fide smash, the woman who changed pop music is left to pick up the pieces. Literally.

Enter our contest to see Lorde in concert at Toronto’s Air Canada Centre on March 29 2018 over on our Instagram page.

Imagine that you are a pop star. More than a pop star, actually. Imagine that you are one of the biggest pop stars in the world: According to some very reliable critics, your first album changed the direction of popular music. It was so surprising, so urgent and so young and different and of-the-moment that David Bowie said listening to you was like listening to the future. You’re that kind of pop star—the important kind, the kind that seems to transcend (or is it elevate?) the very term “pop star.”

You’re that pop star. You haven’t released an album since your music-changing debut, and that was nearly four years ago. You haven’t exactly disappeared, but there’s likely some pressure for your second album to live up to the promise of your first. And, whether that pressure was motivating you or not, you worked incredibly hard on this, your sophomore release. For two years, you wrote and sang and tweaked and experimented and cried and flew around the world more times than you can remember.

And today that album drops. What do you do?

If you’re Lorde (yes, you’re Lorde—who else would you be imagining?), you sit down and finish the jigsaw puzzle you’ve been working on. “This beautiful wooden puzzle that I bought,” she explains when we chat during her recent visit to Toronto. “That was the main achievement of the day.”

I have no reason to doubt this story. In fact, sitting down to finish a puzzle on what might conceivably be a remarkably stressful day seems like a very Lorde thing to do. After all, this is the same pop star whose maturity and talent at 17 inspired a half-serious Internet conspiracy theory that she was actually a woman in her 40s and possibly a witch. But it’s also like she knew I’d need an overarching metaphor upon which to hang this profile, and so, on the day Melodrama dropped, she fit the last piece of her puzzle into the exact right spot.

Lorde—real name Ella Yelich-O’Connor—has just taken a shot of apple cider vinegar. “I’ve heard that it’s generally good for your health,” she explains. “I’ve been travelling a lot, so I’m trying to do everything I can to keep the flu away.” In a few hours, she’ll close out the iHeartRadio Much Music Video Awards with a raucous performance of her single “Green Light.” Before that, she’ll be onstage, looking radiant, to accept the award for iHeartRadio International Artist of the Year.

But right now, she’s backstage, waiting for her sound check. She’s trying to find the balance between answering personal questions—questions that, on second listen, are maybe a little too earnest, especially given her surroundings—and not looking like she’s being asked personal questions. The result: a lot of parental-style laughter punctuating her sentences.

And by “parental-style laughter,” I mean both the kind of laughter you might use when responding to your parents in order to deflect further scrutiny and the kind of generous laughter parents deploy when their child, who is too young to understand or display actual wit, says something that’s supposed to be funny. The fact that her laughter contains several possible interpretations is part of the Lorde puzzle. She’s reserved but still authentic.

Lorde was born to artistic parents and raised in Auckland, New Zealand. After an imaginative childhood, she started singing alongside her guitar-playing friend and posting the songs online. (Interesting fact: To this day, Lorde doesn’t actually play any instruments. “I’m hyper-musical, but I don’t really play anything,” she says. “I write the songs with different chords because I know exactly what I want chord-wise, and then I sing out the chords. I’m very musical, just not in the traditional way, I guess.”) She was discovered when she was 12, and then Universal gave her a development deal.

It’s important to remember here that Lorde is only 20 years old. That means she was 12 in 2009—the heady days of Hannah Montana and the purity-ring-wearing Jonas Brothers. But the young artist didn’t want to sing songs that other people wrote for her. She didn’t want to be manufactured. She resisted and was instead allowed to develop her sound by herself.

That sound, as you imagined earlier, changed everything. Suddenly this shy, introverted, creative teenager—who wrote her first album, Pure Heroine, as a kind of journalistic endeavour chronicling the absurdity of adolescence—was a global phenomenon, complete with famous friends and paparazzi and zany Internet rumours. The success of Pure Heroine could have broken her; Lord knows success has damaged a fair number of talented teens.

But it didn’t, obviously. Lorde kept living her life. That isn’t to say she didn’t learn from the experience, though. “The main thing is that you’re the only one who has to go home and still be you and live with what you’ve done that day,” she says. “And so when it comes to making a decision about something, if people say I should go a certain way, I think, ‘You guys get to go home and take off the hat; I never get to take off the hat.’”

Lorde learned things during her time away from the spotlight, too. Most of them, in some form or another, are what constitute Melodrama. You can hear the life lessons—or at least the journey between experience and life lessons—about heartbreak, the weight fame has on connection and the inconsistent yet palpable thrill of attraction as well as the restless energy of being young and alive. Of course, translating all those lessons into music required some help.

That help mostly came in the form of Jack Antonoff, who, depending on your proximity to hip millennial culture, you might recognize as the guitarist from the band fun., the leader of the band Bleachers or Lena Dunham’s boyfriend. Antonoff and Lorde bonded quickly over a shared willingness to start completely from scratch. The goal was to build her album as if Pure Heroine hadn’t happened. “It was such exploration,” she explains. “The instinct is to assume that I wrote all the lyrics and he did all the production, but sonically this album is so my baby.”

This, by the way, is another piece of the Lorde puzzle.

One thing that Antonoff didn’t have to do was help Lorde figure out what she does and doesn’t like. That isn’t very surprising given her story thus far, but it’s still kind of surprising. “I think I definitely shoot from the hip probably 90 per cent of the time,” she admits. “There were times when Jack would be like, ‘Just give me a second; don’t shoot this down straight away’ and I was occasionally surprised, which was nice.” And as is often the case with those who are opinionated, her opinions would extend beyond her own music. “I need to temper my opinions,” she says. “The analogies I draw can be so mean. Jack always said he was scared when he would play me a Bleachers demo and I would look at him and say, ‘Who is this for?’ That’s like the scariest question because you can always tell when someone doesn’t know who a thing is for.”

In Lorde’s case, she knew it was for Ella. “I’m the kind of musician who works on something and doesn’t even need to put it out—just make it and pop it in a vault,” she says. “I make work to challenge myself. The process is very much about me having a conversation with myself. It’s a very private process, and so I feel like I’ve run a marathon by the time it comes out. I do love that people hear the work; I think I would be sad if people didn’t.”

Melodrama wasn’t the only major pop album to come out this spring. You may recall that Katy Perry also released her new album around the same time. Each record was received very differently. It’s hard to believe they both ostensibly represent the same genre and thus have the same target audience—that is to say, everyone. Where Lorde’s was appraised as evidence of a blossoming, contemplative, sensitive and authentic maturity, Perry’s album came off as empty. Maybe Lorde, because of who she is, was primed to get better critical treatment than Perry, but that’s not the point. The point is both are pop artists, and I get the sense that Lorde wouldn’t want any pop practitioner to be written off as immaterial. To hear her describe it, there’s something inherently beautiful—and true—about pop. “It’s about distilling emotions down to their sleekest, shiniest and simplest form,” she says. “And if you do that successfully, it’s like shooting up the cleanest drug imaginable. It’s not cut with anything; it’s so simple it just goes straight to your brain.”

Love of pop: That’s a puzzle piece, too.

That being said, this puzzle metaphor is a bit ungainly. Because, in the end, what picture forms? It’s tricky because Lorde has always seemed fully formed. Creating Melodrama wasn’t easy, and though she isn’t perfect, she has always seemed somehow whole. But then she’s not putting the puzzle together; we are. She’s handing us pieces, each one giving us a clearer, more complete image of who she is, who she wants us to know. And while I get the sense that she’ll always reserve some pieces for her close friends and family back in Auckland, she’s giving us more than enough pieces to see her and to see ourselves in her. And so we’ll take whatever pieces she gives us—because the picture that’s forming is already miraculous.

Photography by Arkan Zakharov. Styling by Kemal Harris. Creative direction by Brittany Eccles. Hair, Cameron Rains for The Wall Group/Mr Smith. Makeup, Amber Dreadon for Cloutier Remix/Chanel. Manicure, Riwako Kobayashi. Prop stylist, Gillian Harrison. Fashion assistant, Traci Franklin.
Get the best of FASHION in your inbox Thanks for signing up!
The latest fashion, beauty and celeb news delivered right to your email #FASHIONforall Now, check your inbox to complete your subscription
We won’t ever use your email address for anything else
Want even more FASHION? Follow us on social media.