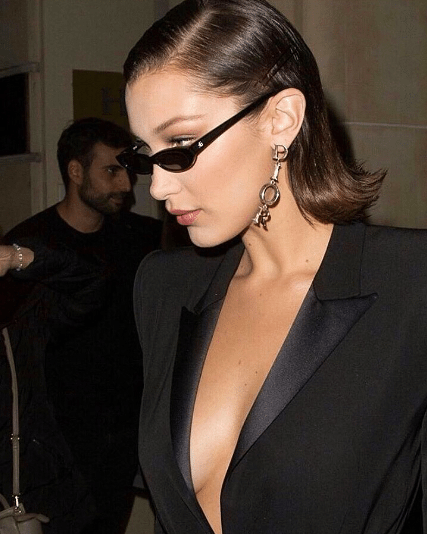 Jen Atkin is Bringing Back Flipped Out Hair, and We’re Here for it

When I first chopped my hair off, I experienced the plague many other shorter-haired women experience: the dreaded flip-out. With my hair just touching my shoulders, the ends would instantly flip out, making my cool girl lob look like soccer mom hair or the flipped out bobs from the early aughts. I would furiously attempt to straighten it every morning, but by the end of the day, the flipped ends were back, leaving me discouraged that my new aesthetic was being ruined simple because my normally stick-straight hair wouldn’t stay straight when I wanted it to (but alas, isn’t that always the case with our hair? Always doing what we don’t want it to do?).

I still have short hair, and I still experience the same problem, at least when my hair is in that “in-between” stage (not quite short or long enough to avoid the flip out). The only way I can really mask it is by waving the rest of my hair in an attempt to deter attention away from the flipped ends, because goddammit, were they embarrassing. But more often than not, I wake up way too late in the morning and don’t have time to curl it.

This happened the day we did a Facebook Live segment with celebrity hairstylist Andrew Fitzsimons. While in his presence, I remember looking at my ends slowly flipping out in the mirror (after I had spent 20 minutes that morning trying to straighten them) and thinking, “OMG. He must think I have awful hair.” After we filmed the segment, Andrew wanted to show me how the Alterna Perfect Texture Finishing Spray worked and as I sat in the chair, I sighed, “I hate my hair right now. It just won’t stop flipping out.”

To my surprise, he told me, “I actually love it!”, adding, “It reminds me of the reverse ‘Rachel’.”

That was the first time I became a little less hateful towards my flipped ends. Then, shortly after, I noticed celebrity hairstylist, Jen Atkin, purposely flipping out the ends of some of her clients, namely, model-of-the-moment and five-time September 2017 Vogue cover girl, Bella Hadid.

Never forget the time @bellahadid murdered us all in this @off____white look ???. And don't forget to stream the show live tonite on off—white.com! Congrats Virg! @virgilabloh ♥️

The style is pretty much the exact opposite of what Atkin had been doing on her clients lately — a ’90s-esque bob with flipped-in ends, which Fitzsimmons, while filming the Facebook Live, touted as his fave hairstyle of the moment.

Guess who just set a record for most @voguemagazine covers in one month (5!!) So proud of u @bellahadid ! ????? #SupermodelStatus

Upon further investigation (ie. checking Jen’s Instastories), I was surprised see her instruct viewers to “curl flipping ends out” in order to get Bella’s Paris style.

Could it really be? Were flipped out ends suddenly cool?

If Jen Atkin or Bella Hadid have anything to do with it, yes. But there’s a big difference between “soccer mom” flipped out ends and Jen Atkin flipped out ends, mainly that Atkin’s version features the ever-so-popular slicked down look, with the ends acting as a sort of accessory.

And it looks like Atkin is really into the look, as she did a similar style on Camila Coelho (again, notice the “curl ends out” instructions).

Getting the beautiful @camilacoelho ready for the @dior show this am…within 5 mins of meeting her I cut off her hair and stole her ?'s. Instant bffs ?? How-to in my IG Stories!

Given Atkin’s influence (and that of her celebrity clientele), I have a feeling this cool girl flip out isn’t just a fluke — it may actually have staying power. And to be honest, my short hair is totally here for it, especially if it means I can sleep in a bit more in the morning.

So thank you, Jen Atkin and Bella Hadid, for making me love my flipped out ends. My hair straightener is happy it can finally catch a break.

Photograhpy via Instagram/jenatkinhair
Get the best of FASHION in your inbox Thanks for signing up!
The latest fashion, beauty and celeb news delivered right to your email #FASHIONforall Now, check your inbox to complete your subscription
We won’t ever use your email address for anything else
Want even more FASHION? Follow us on social media.