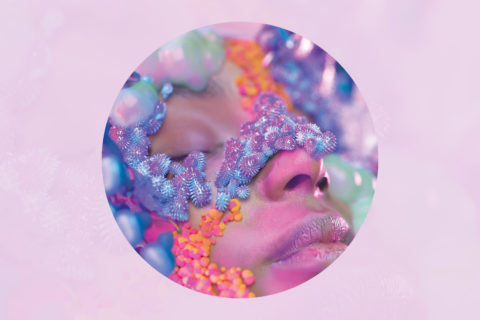 Some people are using filters to subvert the very beauty ideals they’re inspired by.

It may be time for the Butterfly Pretty Instagram filter to move aside. The most interesting thing happening in augmented reality (AR) right now isn’t beautifying filters that purport to make us “prettier” by removing skin texture and flaws, changing our features or making us look like Kardashians. Instead, the new wave of futuristic Instagram filters are approaching aesthetics in an entirely different way.

Take French creator Jade Roche, who taught herself to make filters three years ago after Instagram launched Spark AR Studio, a software platform that allows anyone to design and distribute them. Her most popular creation by far, with five billion views, is New Me, which scrunches users’ faces in the middle so their noses are tiny and their foreheads and chins are exaggerated, giving a vaguely Conehead vibe. Her second most popular filter, Les Yeux, clones users’ eyes for an insectoid effect. And others are even more unconventional — not to mention unconcerned with notions of “beauty.” La Tour Eiffel layers the Eiffel Tower over users’ faces, while Bordel Partout, Roche’s current favourite of the bunch, is a cloud of metal barricades arranged in a halo around users’ heads.

“What inspires me most is pop culture,” says Roche. “I love it and I hate it, but mostly I grew up in it and I’m part of it. I am torn between the asperities and complexities of the world and the simulation of perfection that comes with today’s globalized capitalist and overproductive society, and that inspires me!”

Roche’s creations aren’t that far removed from the first mainstream AR filters, which Snapchat released in 2015 under the name Lenses. Created using technology from Russian start-up Looksery, which it acquired the same year, Lenses allowed users to modify their facial features in real time so they could look like they were barfing rainbows, were wearing a monocle or had hearts for eyes. The following year, the Dog Filter, which placed a canine’s ears, nose and lolling tongue over users’ own features, was everywhere. Celebrities used it (Kim Kardashian even asked for, and received, a Dalmatian version), and media outlets ruminated on its popularity.

Of course, it didn’t take long for filter creators to make the leap from fantastical and playful designs to those intended to correct or improve users’ appearances — especially when Instagram launched its own filters in 2018. Social media, thanks in part to these beautifying filters, has been linked to a decrease in self-esteem and an increased interest in plastic surgery and non-surgical procedures.

But it’s not all bad body image. As technology improved and software became more accessible, the artistic scene became more exciting, says Ines Alpha, a Paris-based 3-D makeup creator who has a background in design but, like many filter creators, taught herself how to work in 3-D with the help of workshops and online tutorials. She designs filters that call to mind the most innovative IRL makeup artists. Interspecies Gossip, a pink-and-purple-hued collaboration with artist collective Grow Your Own Cloud, was inspired by the micro-organisms that live on our skin and looks like something out of your high school bio textbook — if your textbooks contained iridescent sculptural illustrations. She has also recently collaborated with Las Vegas-raised and New York City-based Indigenous artist Madrona Redhawk on the Otherworldly filter, which “imagines what humans would look like in another dimension, without norms and genders,” for Huh, an experimental art project that brings together creatives from different parts of the world.

Still, even though Alpha focuses mainly on artistic aesthetics, beauty ideals do factor into her design process. “When I do my filters, I don’t distort people’s faces,” she says. “I’m only adding 3-D elements to them. The feedback I get from people is that they feel beautiful. They say ‘I feel like a princess’ or ‘I feel like a sea creature.’ But I don’t think they feel beautiful because the filter is hiding their face or changing their features.”

Meanwhile, some people are using filters to subvert the very beauty ideals they’re inspired by. “My first viral filter was Handsome Squidward, and a lot of people commented about how it looked like filler harmonization,” says Brazilian creator Jonathan Augusto Queiroz Pereira, referring to the practice of injecting fillers into the lips, nose, forehead and/or chin to make a person’s facial features look more balanced. “The big jaw and huge lips and cheeks make it look like a bad case of harmonization. Pillow Face [another of Pereira’s viral filters] was inspired by the medical term ‘pillow face’ — when people get too many fillers and the face looks overly plump.”

In these cases, Instagram users are playing with filters for fun — but also, Pereira thinks, to critique the prominence of facial fillers on social media, either through actual plastic surgery or filters meant to mimic that aesthetic.

Roche says that it’s likely it will become easier for designers to create their own filters going forward, and she expects designs to become even more unconventional. “I believe AR on social media as we know it right now is only the beginning,” she says. “Most devices are actually not powerful enough to run the technology as smoothly as intended. I think filters can get more complex, more interesting; they can be practical, informative, abstract, entertaining and political. It’s a new way of communicating and interacting, and there are so many possibilities.”