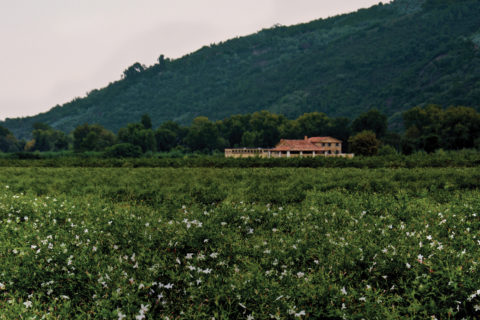 The Making of Chanel No. 5

An expedition to Grasse, the heart of French perfumery, uncovers the secrets behind one of the world’s most-sought-after scents.

Spritz a fine mist of Chanel No. 5 and you won’t be reminded of a flower. Launched in 1921, the fragrance famously doesn’t evoke one. Rather, one might say it smells like abstract art — a composition beyond nature, a rebellion against the demure (and, frankly, dull) lily of the valley-centric zeitgeist of its time. Instead, it produces an intense hit of powdery, soapy cleanness, which is the result of a lavish dose of aldehydes. To borrow Coco Chanel’s blunt brief to her genius perfumer, Ernest Beaux: It smells like the scent of a woman and nothing else. However, it’s not a contradiction to say that the fragrance couldn’t be what it is without flowers — most crucially its signature jasmine, and not from just anywhere. As for how Chanel No. 5 is made, the parfum, exactly as it exists today, is only possible because of what blossoms under the cover of night on one very specific, inconspicuous 20-hectare farm — findable only if you know where to look — in the luminous village of Pégomas (population: around 8,000), in the arrondissement of Grasse, the world’s long-reigning perfume capital.

“This jasmine has a specific scent that cannot be reproduced elsewhere,” explains Joseph Mul, patriarch of the family-owned estate that has exclusively supplied Chanel for decades. A fourth-generation flower farmer, he exudes the enthusiasm you’d expect from someone who has spent his life nurturing delicate plants, encouraging us to lean in for a whiff even though the smooth, sweet notes are already perfuming the open air.

Of course, jasmine isn’t rare, and in the world of perfumery, Egypt and India cultivate the overwhelming majority. The exotic blooms, while lovely in their own right and cheaper to obtain, are wholly different from their Grassegrown counterparts, even though the botanical species is identical. “Let me tell you,” says Mul, as if bragging about the merits of a beloved child, “this one is much milder, lighter, with slightly honeyed tones.”

Grasse’s specialness is rooted in its fertile soil and a rare idyllic microclimate; it’s bathed in plentiful sun, softened by the Mediterranean breeze from the south and sheltered by the Préalpes to the north. “It’s never too cold and never too warm,” explains head perfumer Olivier Polge, only the fourth nose in Chanel’s history. (His father, Jacques Polge, held the job for 37 years.) “Everything grows in very gentle surroundings. The flowers are not burned by the sun; they don’t frostbite. I always describe the jasmine from Grasse as fresher; there’s a tea note. The exotic jasmine is beautiful as well, but it’s more fruity, like marmalade, as if the petals were cooked by the sun.”

Beyond the character-defining effects of the weather, the local savoir faire is just as essential, inspiring UNESCO to add Grasse’s perfumery tradition to its Intangible Cultural Heritage of Humanity list in 2018. Passed down through generations, the skills are as much an art as a science. In addition to a basic grasp of horticulture, extraction and distillation methods, “the art calls for imagination, memory and creativity,” the agency noted.

If you want to know how Chanel No. 5 is made, you need to know the quirks of jasmine and how its star-shaped white blossoms unfurl at nightfall and must be harvested before the fragrant oil wanes at daybreak. From August to October, the ritual begins at earliest dawn: Shaded by brimmed hats and scarves and armed with wicker baskets, Mul’s pickers can harvest the whole field within two mornings before starting anew.

It’s no small feat given that the fragile petals must be plucked one by one and with sleight of hand. (The petal resists if pinched.) While the method may sound inefficiently old school, mechanical harvesting won’t work. By the time the sun is at its peak, crates piled with jasmine petals are spirited away to the processing facilities, located close by to maximize the flower’s freshness as much as possible. The daily haul is around 100 to 150 kilograms, or the equivalent of more than one million flowers.

It takes about 330 kilograms of jasmine to get a mere 600 grams of absolute, the ultra-concentrated liquid needed to make Chanel No. 5. You don’t have to do the math to know the supply of Grasse jasmine is scant. There’s enough to formulate No. 5’s grands extraits (the most concentrated in the collection) in their entirety, but other interpretations of the juice include jasmine that’s grown elsewhere, too.

The downside of Grasse’s dreamy French Riviera location is that local farmland is gradually giving way to property development. “The region has completely changed,” says Polge. “When my grandparents lived here, there was no tourism.” The younger generation have also been leaving for cities like Paris, having decided they don’t want a life in the fields. Sensing the existential threat to No. 5, Jacques Polge had the forethought to strike an exclusivity deal with Mul’s farm back in 1987, securing a source of the local ingredient so key to the perfume’s soul. This past August, in a bid to protect more land for its jasmine and other flowers, Chanel announced that it had purchased another 10 hectares in southern France.

As with any art form, perfumes reflect the spirit of their era. So, the riddle of why No. 5 still resonates — why it’s still the world’s most famous perfume more than 100 years later — is naturally a matter of debate. “If this were easy to say, we would only make such iconic fragrances,” quips Polge.

Of course, there’s the legacy of luxury, glamour and popcultural impact, from Marilyn Monroe’s “nothing but No. 5” bedroom attire to Andy Warhol’s iconic prints to present-day muses such as Marion Cotillard. There’s the technical brilliance of the scent itself, lauded as “a masterpiece of modernist sculpture from 1921, one you can wear,” as critic Tania Sanchez writes in her book Perfumes: The A-Z Guide.

Another not-so-small factor is the house’s scrupulous devotion to preserving the fragrance’s classic beauty. The magic of any perfume is by nature a fleeting pleasure: A single spritz soon disappears into the air, and seasonal fragrance fads are quickly forgotten. With today’s (and tomorrow’s) bottle of No. 5 parfum as true as yesterday’s, the timeless allure shows no signs of fading.

Photography courtesy of Chanel
Get the best of FASHION in your inbox Thanks for signing up!
The latest fashion, beauty and celeb news delivered right to your email #FASHIONforall Now, check your inbox to complete your subscription
We won’t ever use your email address for anything else
Want even more FASHION? Follow us on social media.