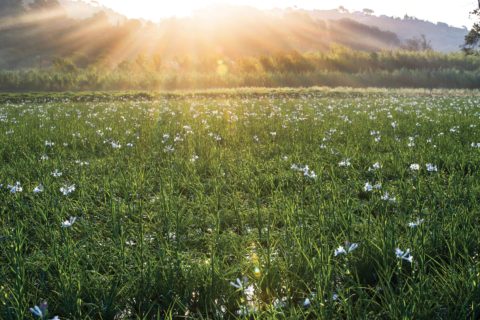 Behind the Scenes at Chanel: The Farm and Family Behind Their Perfumes

If you were to eavesdrop on my chat with Joseph Mul, you might think he’s describing a rather temperamental woman who has stolen his heart. “She’s capricious,” he says, simply. “She makes you wait. You think she’s going to bloom and she doesn’t. She decides when that will happen, but it’s worth the wait. The tuberose teaches you patience.”

Today this slender and elegant flower—which is one of the signature notes in Chanel’s Gabrielle fragrance—is being coy. It’s late September in Grasse, and Mul—who partnered with the brand in 1987 to supply flowers for its fragrances—had expected his field to be full of blooms. Instead, the planted rows are dotted with only the occasional flowering stem. In the adjacent field, pickers are harvesting the more reliable jasmine blooms.

This flower is also used in Gabrielle, and it has been one of the signature notes in Chanel No. 5 since Ernest Beaux created that fragrance in 1921 using flowers from this region in the south of France. While the other flowers Mul grows—roses, geraniums and irises—require careful attention, the tuber­ose is decidedly the most high maintenance. In November and December, the 250,000+ bulbs are removed and carefully stored for winter and replanted the following April.

It can take years for them to flower and even more years before they are used in fragrances, explains Olivier Polge, who was the first perfumer at Chanel to use these flowers. In 2011, his father, Jacques—who had been Chanel’s top nose since 1978—had rescued the bulbs when a nearby farmer was going to retire. “I think we started with 30,000,” recounts Polge, who became head perfumer in 2015. “My father wasn’t able to use them in his work because they weren’t ready.”

Polge says that working with the Grasse-grown tuberose was like a painter being given another hue in his palette. Unlike tuber­ose from India or Mexico, Polge says that their flower is “fresher and creamier without the waxy green notes.” He attributes that to the area’s soil and climate as well as Chanel’s unique distillation techniques. While he assembles the raw materials to create a scent, Polge says that the beauty of a fragrance comes from the interaction between the scent and the person who wears it: “Each woman has to make it unforgettable in her own way.”